WHY WE MUST IMPROVE GOVERNANCE & INSTITUTIONAL CAPACITY, BY OSINBAJO 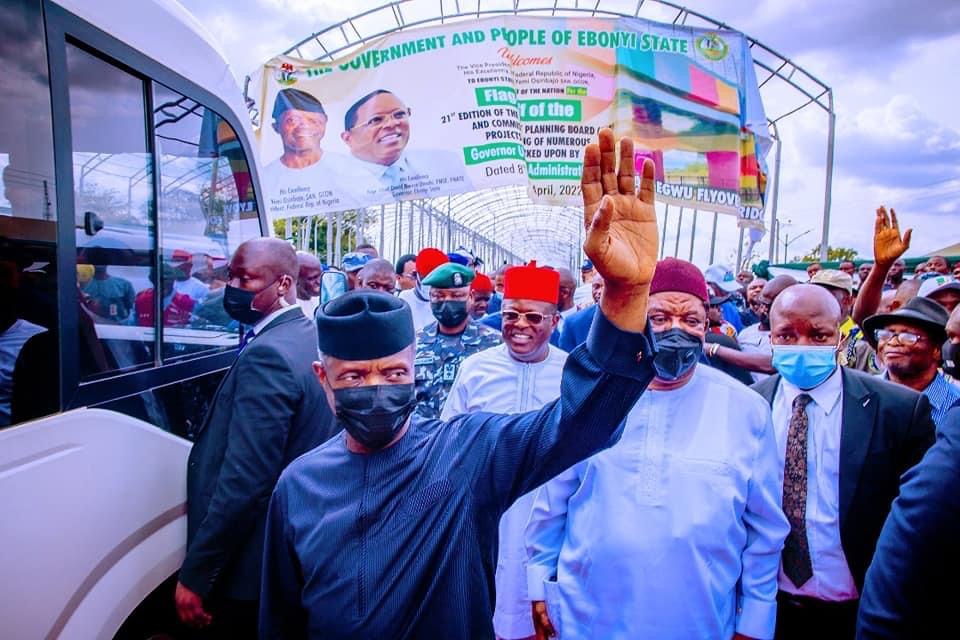 Governance and institutional capacity to properly manage resources of nations hold the ace to the prosperity of the citizenry, and this is why authorities must continue to improve them at all times, according to Vice President Yemi Osinbajo, SAN.

Prof. Osinbajo stated this Friday in his remarks at the opening of the 21st meeting of the National Council on Development Planning (NCDP) held in Abakaliki, adding that governance and institutional capacity account for the difference between performing and poorly performing economies.

The theme of the meeting attended by members of the Federal and States’ Executive Councils was “Good Governance and Institutional Capacity: Pathways to Sustainable National Development.”

The VP spoke at the NCDP meeting during a 2-day official visit to Ebonyi State, where he also commissioned a number of projects executed by the state government.

On arrival at the Akanu Ibiam Airport, Enugu, enroute to Ebonyi State, the Vice President was warmly received at the airport by Enugu State Governor Ifeanyi Ugwuanyi and other state government officials.

He later arrived Abakaliki in Ebonyi via a Chopper, where he received a rousing reception by the people of the State and was welcomed by the State Governor, Engr. Dave Umahi and his deputy, Dr. Eric Kelechi Igwe, among other senior state government officials.

According to the Vice President, “it is the lack of good governance and weak institutional capacity in the poorer and less performing economies that largely account for the difference between the poor and rich countries.”

“The way that public institutions and agencies perform public affairs and manage public resources, and also how they manage the participation of citizens, and ensure equity and the rule of law, are what makes the difference between the poor and rich, performing and non performing countries,” the VP added.

Making reference to Japan, South Korea and Singapore as countries that still perform better than the resource-rich nations of the world, Prof. Osinbajo said, “how public institutions function is largely determined by institutional capacity. This is not merely having a well educated and well motivated workforce, but systems that are and can enforce transparency and accountability.

“The result of poor governance is that delivery of public goods is ineffective, every public service is affected, whether it is collection of taxes, or delivery of social investment programmes, public education, health services, obtaining trade facilitation approvals or just passports or drivers licence, public running of power services or delivery of petroleum products.”

Speaking further, Prof. Osinbajo noted that “poor governance and institutional capacity mean a weak economy, private sector performs sub-optimally because the business environment is hostile, so fewer jobs are created, housing stocks may fall where private people do not build houses for rent, because when tenants fail to pay rent they can remain in the accommodation for years without paying rent because the court system is too slow and they cannot be legally evicted while the court process subsists.”

He urged the meeting to come up with solutions to the country’s development challenges, stating that “every one of these problems is human. They can be solved by human beings. Every country that chooses to solve its governance and institutional problems has, in effect, chosen to develop and prosper.”

He cautioned against acts of dishonesty, noting that “lack of transparency and making bureaucratic corruption the norm” will lead to “backwardness and poverty of the majority.”

The Vice President also recommended that “synergy amongst all tiers of government remains of paramount importance at this critical time when we continue to face the challenges of recovery from the onslaught of the COVID-19 pandemic, now compounded by the ongoing Russia-Ukraine war.”

In his remarks, Governor David Umahi thanked the Vice President for his commitment and loyalty to President Muhammadu Buhari, as well as his love for the State, noting that “there is a certain ecstasy that follows you whenever you are in Ebonyi State.”

The VP also inspected the St. Margaret Umahi International Market, where he was greeted to loud cheers by excited traders and residents.

Also on Friday evening, the Vice President commissioned the Shopping Mall, which he observed could match “any mall anywhere in the world in grandeur and beauty,” as well as the Christian Ecumenical Centre, where a gala night was hosted in his honour.

The VP highlighted the socioeconomic benefits of the projects he commissioned in the state, and commended Governor David Umahi for his efforts.

At the Gala night in his honour on Friday evening, the VP observed that Ebonyi State, as “the Salt of the Nation” has been “made more savoury” by the activities of the Governor.

“An hour ago, we walked down the President Muhammadu Buhari Light Tunnel located here at the Akanu Ibiam junction, and we walked through a dazzling avenue of lights to the Mall,” he said.

Prof. Osinbajo thanked Governor Umahi for “his kindness and unfailing courtesies at all times” , as well as “the government and people of Ebonyi State for their hospitality and warmth.”

Also on Saturday, the Vice President commissioned and inspected other projects, including the David University of Medical Sciences, in Ohaozara; the 12km Okposi-Uburu Road, and St. Joseph Umahi Flyover, also in Uburu. He also inspected the Ebonyi Industrial cluster in Uburu.

The VP has since returned to Abuja today.