WHY WE MUST CREATE A COUNTRY THAT WORKS FOR US ALL, BY OSINBAJO 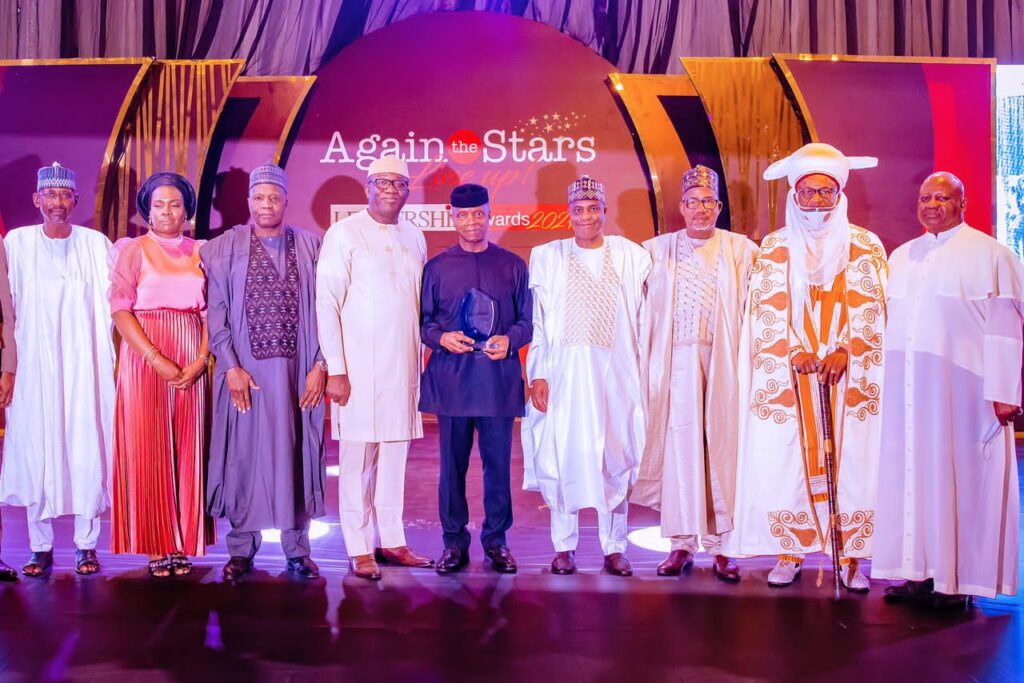 *Adds: We must build a peaceful, secure society that enables commerce and values productivity

“We must create a country that works for us all – a peaceful and secure society founded on law and order and the rule of law; a society that enables commerce and values productivity, so that large and small businesses can grow and provide jobs and opportunities for millions of young people, a society where no one is left behind.”

These were the words of Vice President Yemi Osinbajo, SAN, this morning when he was formally honoured with the award for Leadership Person of the Year 2021 at the Leadership Newspapers’ Annual Conference and Awards ceremony which held today at the International Conference Centre (ICC), in Abuja.

In January this year, Prof. Osinbajo was named the Leadership Person of the Year 2021, alongside the Director-General, World Trade Organization (WTO), Nigeria’s Dr. Ngozi Okonjo-Iweala.

The leading national newspaper had noted in its citation that the VP is a worthy recipient of the award “for his key role in steadying the ship of state through the storms as well as laying the foundation for the social intervention programmes of the current administration.”

Speaking at the event, after receiving the award, the Vice President noted that we must also create a country that can provide, “by means of an effective social welfare scheme, a safety net for the very poor and the vulnerable; a united and tolerant nation where all, irrespective of ethnicity, religion or political persuasion, are respected, treated fairly and justly, and have equal access to all opportunities.”

The VP added “we must build a Nigeria where a boy or girl does not say that, ‘I am from the South-West, or I am from the North-West, or South-South or North-East, or North-Central or South-East, but that I am a Nigerian, a citizen of one of the greatest and most prosperous nations on earth.

“This is the kind of Nigeria that those of us in this political tendency, to which Sam Nda-Isaiah belonged, all attest to and believe.”

Prof. Osinbajo dedicated the award to “millions of Nigerians who believe in this new Nigeria, and who retain faith in our possibilities as a people and are doing their best every day in their various corners to build this nation through honest endeavour.”

“To these people of goodwill who are working hard to promote peace, tolerance and to build a country that truly represents all of our dreams; to those working hard to build bridges, those who have refused to be frustrated or even wearied by the trials of our country as it grows and continues into the fullness of its manifest destiny.”

According to him, “it is because of such Nigerians, that despite the great challenges we are passing through on our march of progress, I am certain that we will build this great Nigerian nation that we all yearn for.”

Thanking the Management of the Leadership Group led by its Chairman, Mrs Zainab Nda-Isaiah for the recognition, the VP also commended the Group “for forging ahead” following the loss of its Founding Chairman and Publisher, late Sam Nda-Isaiah, who died in December 2020.

Prof. Osinbajo noted that “the late Sam Nda-Isaiah was a dogged achiever who stood for integrity in public life and embodied the finest traditions of Nigerian journalism. He believed fervently in the role of the media as an umpire of public discourse and in its mission of elevating the quality of public debate. I am gratified that the values he lived by continue to be ardently represented by this organization.”

The Vice President also recognized his co-awardee, Dr Okonjo-Iweala, who he noted is a globally affirmed finance and development expert, and a true Nigerian patriot.

“Every glass ceiling she has broken, and they are many, has inspired girls and women all over the world to reach for the highest heights in all fields of human endeavour,” he stated, regarding her.

Other dignitaries included His Royal Highness, the Etsu of Nupe and Royal Father of the Day, Alhaji Yahaya Abubakar, CFR, who presented the award to the VP; Rev. Father Patrick Alumuku, who represented the Bishop of the Catholic Diocese of Sokoto, Matthew Hassan-Kukah; and also delivered the keynote address themed, “Resetting Nigeria: Culture, Politics, Geography and the role of Big Ideas.”

Senior government officials and members of the Diplomatic Corps also attended the event.

After the Abuja event, the VP proceeded to Kano State to continue his nationwide consultations with stakeholders and delegates of the All Progressives Congress (APC) in the State.

Earlier on arrival in Kano this afternoon, the Vice President stopped by the scene of Tuesday morning’s explosion in Sabon Gari area of the State, to commiserate with victims, before proceeding with the interactions with the APC stakeholders.

Laolu Akande
Senior Special Assistant to the President on Media & Publicity
Office of the Vice President
17th May, 2022