WHY RELIGIOUS LEADERS SHOULD COLLABORATE WITH GOVERNMENTS IN BUILDING PEACE, SECURITY IN WEST AFRICA, BY OSINBAJO 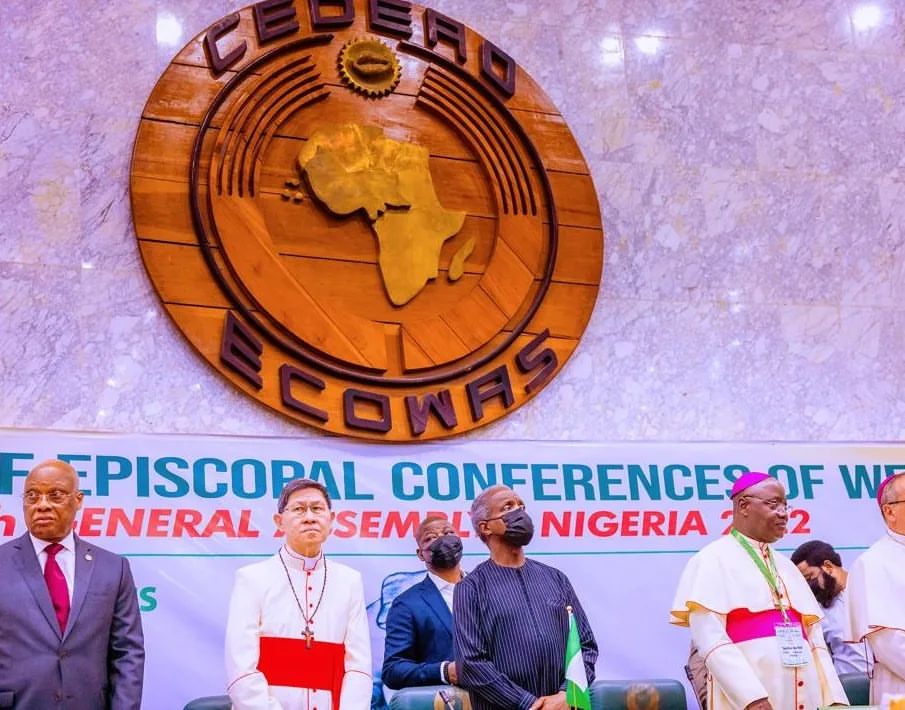 *Adds that they must also speak against “violent non-state actors propagating genuine causes but with mindless violence leading to destruction of lives, property”

Religious leaders and faith communities must join hands with governments and play a significant role in ensuring fraternity and harmony in West Africa.

This is because an integrated, peaceful and prosperous sub-region would not be fully guaranteed if peace does not first reign in local communities and in each of the countries.

These were the summations of the remarks by Vice President Yemi Osinbajo, SAN, today at the General Assembly of the Reunion of the Episcopal Conference of West Africa (RECOWA), held at the ECOWAS Secretariat, Abuja.

Prof. Osinbajo, who represented President Muhammadu Buhari at its opening ceremony, spoke on the theme of the Conference, “Fratelli Tutti: Path to Build Brotherhood and Sustainable Peace in West Africa.”

The Vice President, in his remarks, highlighted that the “Fratelli Tutti is the powerful notion on which His Holiness, Pope Francis, anchors his most recent Encyclical – titled Fratelli Tutti—The Concept of the Brotherhood of all Humanity.”

The VP urged the religious leaders “to not only explore ways of strengthening the bonds of faith between your communities but also of building bridges across every divide that threatens to fracture our nations.”

He said, “it is my hope that you will conceptualize ways of bringing the full weight of the immense moral authority that you possess upon our nations and in the sub-region as a whole.”

Emphasising the Fratelli Tutti concept, the VP noted “the idea that fraternity and social friendship are the ways to build a better, more just and peaceful world with the commitment of all people and institutions. The Encyclical proposes some of the boldest and most radical ideas on securing human unity, peace and security.”

The VP added that “by offering concrete prescriptions on building brotherhood and sustainable peace anywhere, the Encyclical Fratelli Tutti rightly takes the position that this is not merely the business of governments and political institutions; it must also be anchored on our civil societies of which the faith communities are an important constituency.”

In ensuring peace and stability in the country and region, the Vice President noted that “the Government of Nigeria remains committed to collaborating with the Church and all well-meaning actors in promoting peace and security.”

Noting that “concern for our neighbours is the moral foundation of social welfare,” Prof. Osinbajo observed the Good Samaritan story was told by the Lord Jesus and “raises sacrifice and concern for the well-being of others over self, thereby establishing “the truth that love of our neighbour is the greatest expression of our faith.”

He then explained that “social security for the poor and vulnerable are schemes that ensure that none is left behind and that no citizen in these blessed West African nations needs to go to bed hungry.

“That we must prioritize universal healthcare, while also ensuring free and compulsory basic education. And that we must create the environment for millions of young and restless people within our borders to find good-paying jobs and live decent lives.”

Proffering solutions to security and other challenges to regional peace and peaceful coexistence, Prof. Osinbajo emphasized the importance of unity in diversity and building bridges across societal divides.

He said, “indeed as people of faith, we look upon the diversity of our people as a gift of providence, not as a cause of conflict. We are gratified that the Church has stood out and continues to stand as a powerful voice for ecumenism all over the world and is committed to doing so in this region.”

While commending the Catholic Church and the Bishops’ Conference for establishing a reputation for speaking truth to power, the Vice President also called on the Church as a whole to speak out against violent non-state actors.

“Over the years, the Church has modelled profound approaches in challenging the impunity of some state actors and errant power. But my Lords, I believe the times also call for speaking to the growing numbers of violent non-state actors, some propagating genuine causes but with mindless violence often leading to the destruction of lives and property.

“In answer to tendencies that promote violence, force and war in the propagation of ideas, His Holiness, the Pope, takes the view that even Augustine of Hippo, “who forged a concept of ‘just war’ also said that ‘it is a higher glory still to stay war itself with a word than to slay men with the sword, and to procure or maintain peace by peace, not by war’.”

Laolu Akande
Senior Special Assistant to the President on Media & Publicity
Office of the Vice President
3rd May, 2022