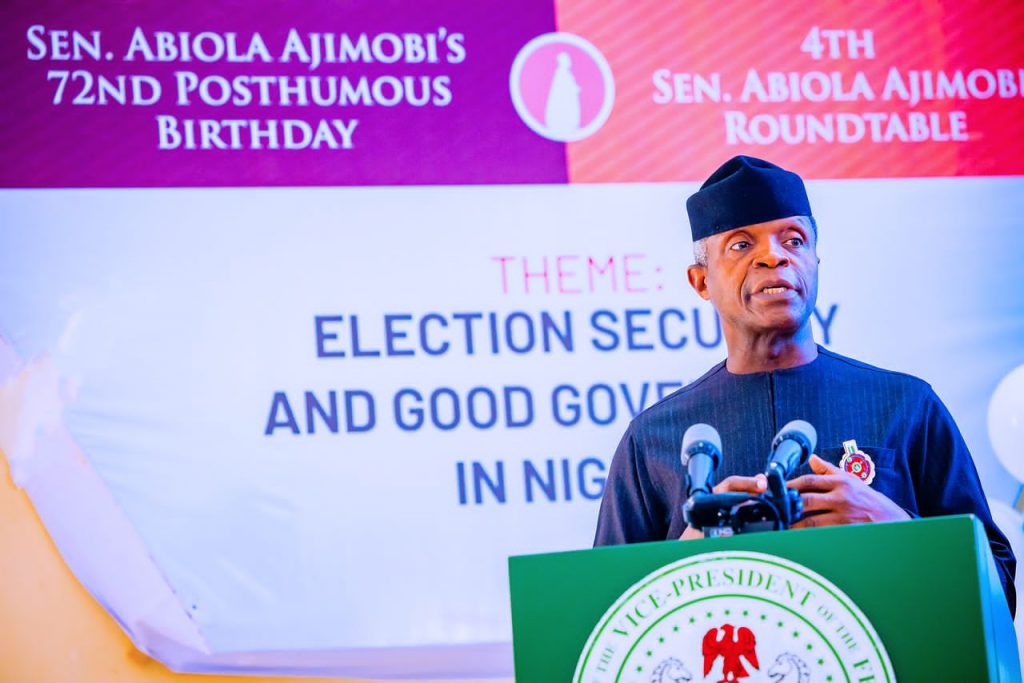 Democracy remains the best system of establishing governments because it guarantees respect for the fundamental rights of individuals to choose their leaders, according to Vice President Yemi Osinbajo, SAN.

Prof. Osinbajo stated this today in Ibadan, Oyo State capital, where he chaired a roundtable discussion, which was held in honour of the late governor of the State, Senator Abiola Ajimobi, and in commemoration of his posthumous 72nd birthday.

Speaking on the theme of the Roundtable, Election Security and Good Governance in Nigeria, the VP noted that democracy as a “ system of governance guarantees the accountability of the elected to the electorate. As the electorate determine in every electoral cycle by their free choice whether the mandate given was properly utilized.”

Referencing the timeless quote by the late US President Abraham Lincoln in his Gettysburg Address in 1863, Prof. Osinbajo submitted that “man has not yet developed a fairer and more just system of establishing governments than that the government be a government of the people by the people for the people.”

“This right of choice of leaders as given by democracy is not just a fundamental civil and political right, but it also separates man from animals for whom might confers the right to leadership,” he added.

“I am sure some of the conversation today will look at this fundamental point…how can we protect the vote, how do we ensure that every vote counts; how do we protect the government of the people, by the people, and for the people; and ensure, as Lincoln famously prayed at Gettysburg, that it does not perish from the earth?”

Prof. Osinbajo described the late governor Ajimobi as “an exceptional communicator and a natural bridge builder, who attained early success in the oil and gas industry, and then emerged as an astute politician, Senator of the Federal Republic, and two-term governor of Oyo State.”

The VP added that the late Senator Abiola Ajimobi was “a remarkable human being, an extraordinarily gifted man, astute politician, accomplished public intellectual and administrator in his own right.”

The former Chairman of Independent National Electoral Commission (INEC) Professor Attahiru Jega, was the lead speaker, among other distinguished panels of discussants.