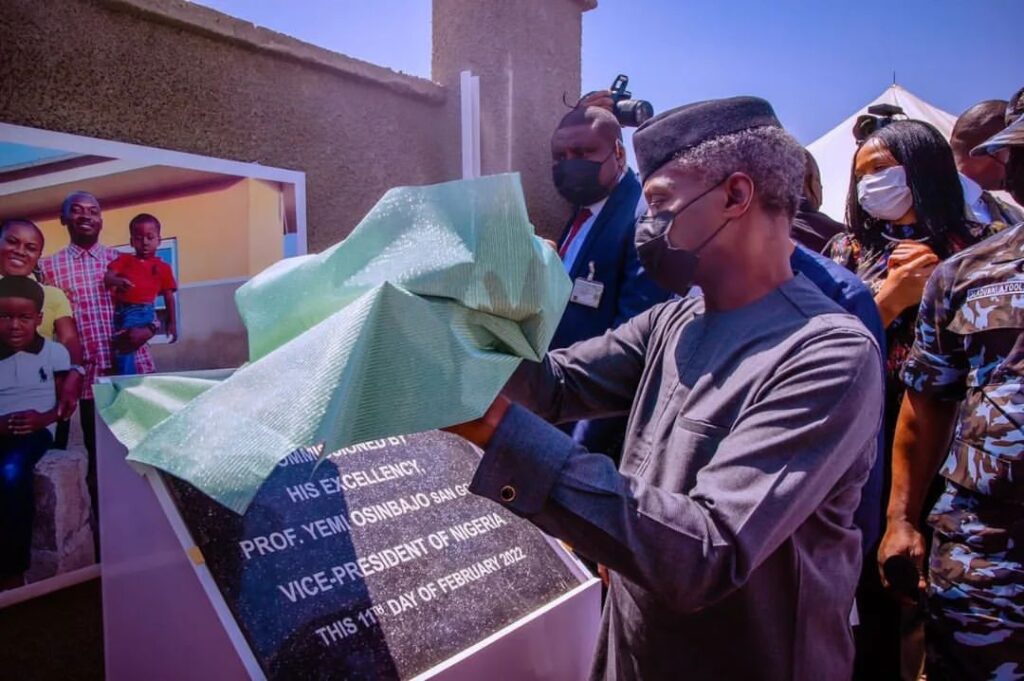 *Osinbajo, a man of his word, has a heart for the poor – Millard Fuller Foundation

To address the issue of inadequate housing in the country, the Buhari administration remains determined in its vision to build a nation where low income earners have the dignity of a decent home and livelihood.

This will not only improve the quality of lives of Nigerians, but also boost the economy through a vibrant housing market.

Vice President Yemi Osinbajo, SAN, stated this on Friday in Masaka, Nasarawa State at the commissioning of 248 housing units and commemoration of the 1,000th home built by the Millard Fuller Foundation, MFF.

Describing the commissioning as “a watershed event in the important work of providing housing for Nigerians who need it most”, the Vice President stated that “while the challenge of inadequate or no-housing undermines the quality of life of many Nigerians on low income, it also denies our economy and, therefore, our collective welfare the growth that is possible through a vibrant housing market.”

The Vice President emphasized that the Buhari Administration is taking the challenges seriously by addressing the concerns.

The most recent initiative regarding this is the N200 billion National Social Housing Programme under the N2.3 Trillion Economic Sustainability Plan (ESP), which is aimed at delivering homes for Nigerians on low income, as well as providing jobs for the local industry.

According to Prof. Osinbajo, to ensure that these initiatives are sustained, the Federal Government is in the final draft stages of a comprehensive 10-year National Housing Strategy. The strategy is the first of its kind with input from the private and public sector players.

The VP disclosed that under the ESP Social Housing programme, which will create up to 300,000 homes, 18 States have so far given land for free, while 19,478 homes have been built, including 582 purchased from the Millard Fuller Foundation.

“We are negotiating another 400 homes with them,” Prof. Osinbajo stated, adding that “the one-bedroom self-contained costs N2 million and N3.2 million for the two-bedroom. We negotiated with Dangote, BUA and Lafarge to give the Family Homes Fund cement at 30% discount. So we now have low cost cement.”

Highlighting the Millard Fuller Foundation’s housing units in Nasarawa State as an example of private sector partnership with Government in reducing the social housing supply gap, the Vice President hoped that “it can serve as a model for many others to follow, with the potential for creating homes that are affordable to Nigerians on modest income, particularly our young people as they start out in life.”

The VP, who was received in Masaka, Nasarawa State by Governor Abdullahi Sule, later inspected the affordable housing units built by the foundation.

Speaking at the event, Governor Sule thanked the Vice President for finding the time to commission the housing units and “to share in the joy of the beneficiaries, especially those of the Fuller Foundation,” describing the gesture as a demonstration of the VP’s care for the people.

The Governor also commended the effort of the Federal Government in finding solutions to the challenge of affordable housing and gave assurances that the State Government is commitment to fixing the access road to the housing estate.

Earlier, Mr Sam Odia, the National Director of the Millard Fuller Foundation expressed appreciation for the Vice President’s presence to commission the housing units. He described the VP as a “man of his word, and a man who has a heart for the poor.”

He added that the foundation is working with the Family Homes Fund to advance the cause of social housing in Nigeria.

Also present at the event were the Managing Director of the Family Homes Fund, Mr Femi Adewole; the Senior Special Assistant to the President on Infrastructure, Ms. Imeh Okon; officials of the State and Karu Local Government Council; the Etsu Karu, HRH Luka Panya-Baba; and representatives of partners in the project, among others.

The Millard Fuller Foundation was founded in 2006 and has been working on more inclusive housing for low-income Nigerians. The Foundation is supported by the Fuller Center for Housing Inc., USA, Selavip International, Belgium, Family Homes Funds Ltd, and the Deutsche Gesellschaft für Internationale Zusammenarbeit GmbH (GIZ). The Federal Government’s N-Power programme.