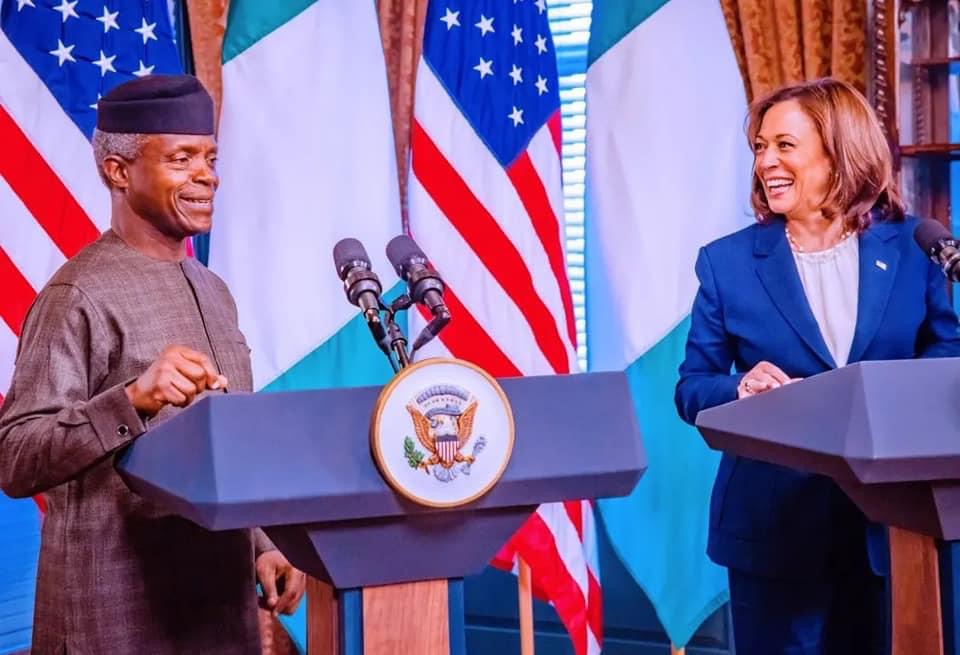 A renewed commitment by both Nigeria and the United States to work together on many global issues, especially on Climate Change and the global energy transition towards net-zero emissions emerged yesterday at the White House after a meeting between Vice President Yemi Osinbajo, SAN, and his American counterpart, Vice President Kamala Harris.

Prof. Osinbajo while responding to welcoming remarks by VP Harris noted that “we very strongly believe that we (Nigeria and US) in the coming years, will need to work together again on so many global challenges that are varied, and they come up very frequently now from promoting peace and security, to tackling global health issues and climate change and of course, economic adversity.”

Speaking specifically about Nigeria’s Energy Transition Plan, Prof. Osinbajo said “the Plan is important for us because we see especially, the climate crisis as two existential issues; one is the crisis itself, second the energy poverty which is an issue for us in our part of the world.

“So, while we look forward to the 2060 carbon neutrality goal, we are also hoping that even within a shorter period by 2030 we will deal with the issue of energy poverty.

“We look forward to the coming years and months for even greater collaboration and stronger ties between our countries to create a fairer, more prosperous and perhaps a greener, also freer nation and nations and the world,” the VP added.

He then commended the US for its innovative approach to addressing Climate Change, noting that “I must also congratulate you because of the Inflation Reduction Act and again, in particular, this is historic especially for those of us who are paying attention to all the issues of Climate Change.”

Referencing the global advocacy of Prof. Osinbajo on the issue of a just energy transition, VP Harris observed that her Nigerian counterpart has “been an extraordinary leader on this issue and I noticed this is something you feel very strongly about and you have been very adamant about the role Nigeria is playing in addressing this crisis that face us all.”

Both the US Vice President and the Nigerian Vice President met at the Ceremonial Office at the White House and both made remarks to the press before the closed session where they discussed bilateral issues.

Speaking further on America’s leadership role in Climate Change, Prof. Osinbajo noted the “United States’ leadership in the area of Climate Change and we are all excited to queue behind the US and see that we get many of these objectives.”

Vice President Osinbajo disclosed that Nigeria will require investment support towards the implementation of the Energy Transition Plan, referring to his earlier meetings in the past few days in the US Capital at the World Bank Group, the US Treasury and the US Agency for International Development, USAID.

Excited about the responses to the Nigerian plan so far, the VP noted “we are anxious to get all the support we can. In the last few days, I have been talking to a few of the agencies here, the World Bank, USAID, in fact, the Treasury Secretary yesterday also. And they have all been positive and shown indication that they will be very helpful.”

The US Vice President had earlier expressed her hope about Nigeria’s ability to achieve the ambitious goals laid out in the plan saying, “I congratulate you for your example on your Energy Transition Plan which I know pledges carbon neutral energy by 2060, an ambitious goal but important and by your leadership, I have no question that they will be achieved.”

Vice President Osinbajo also took time to laud the long-standing cordial relations between Nigeria and US.

Continuing, the VP added “we also must appreciate the firm support that we received from the US especially in our fight against terrorism within our borders and in the Sahel and of course, the very timely donation of vaccines, 4 million vaccines, as we battled the COVID-19 pandemic. And that, of course, was extremely useful.”

Vice President Kamala Harris also praised Nigeria’s leadership role in upholding democracy in West Africa and expressed hope that the general election next February will be peaceful and reflect the will of the people.