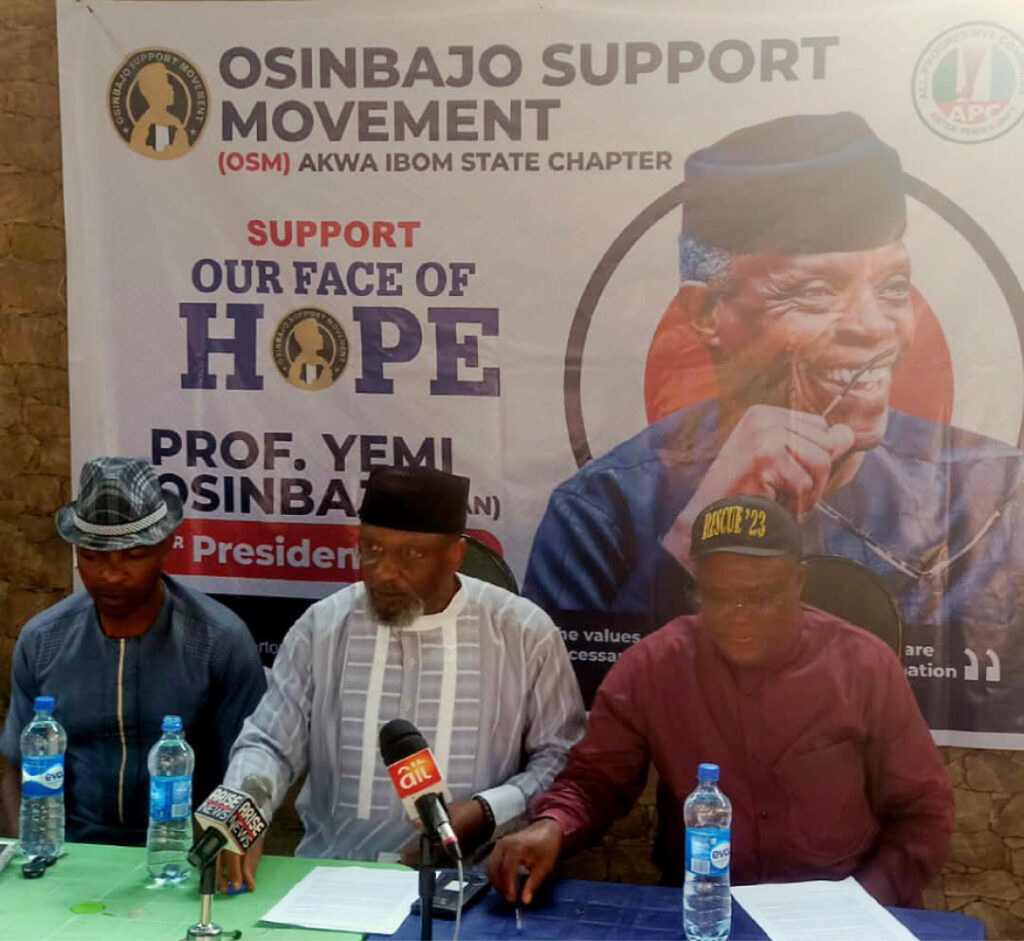 A coalition of sociopolitical groups in Nigeria under the auspices of The New Tribe is set to converge on Uyo, Akwa Ibom State with intent to call on the Vice President, Prof Yemi Osinbajo SAN to join the 2023 presidential race.

This was made known today in Uyo during a Press Briefing organized by the Local Organizing Committee of the event.

The LOC said “It is our pleasure to welcome you to this press briefing where we will intimate the general public through your respective Mediums of our activities.

The New Tribe is a coalition of all support groups advocating for Vice President, His Excellency, Prof. Yemi Osinbajo to run for President in the 2023 Elections. The essence of this briefing is to announce that we will be having the second in the series of declaration ceremonies billed to hold across the different geo-political zones in the country, on the 5th of March, 2022 in Uyo, Akwa Ibom State.

“This event which draws delegates from support groups across the length and breadth of Nigeria is the second of such coming after the highly successful Kano Declaration in January.

The event is organised to bring together Nigerians of like mind, united by the common objective of building a new tribe of Nigerians whose allegiance is not to tongue, tribe or religion, but to the unifying principles of nationhood, fired by the objective of driving change through innovation, enterprise and industry. United by the common belief that the Vice President, Professor Yemi Osinbajo, is the most accomplished, suitable and prepared person to lead the country in 2023. Hundreds of support groups have emerged around the country calling on him to run for the office of the President in 2023.

The New Tribe is a movement by Nigerians, motivated by the conviction and belief that to build a new Nigeria, we need to build a new tribe of Nigerians. Its vision is that of a new Nigeria; a new tribe governed by the can-do spirit and a new ethos founded around the values of integrity, hard work, justice, accountability, unity, sacrifice, patriotism, love for the people and country and a sense of community.

“The New Tribe believes that innovation is at the core of progress and development and that the energy and creativity required for national transformation already abounds among our youth and that the right leadership at the national level only needs to plug in to see to the actualisation of the promise that Nigeria is.

We urge you all to be part of this epochal event even as we implore you to spread the message of The New Tribe which dream it is to have a leadership that would consolidate on the achievements of our past leaders for the purpose of achieving a new Nigeria of our dreams”.

The event which is expected to host prominent personalities across party lines, will be held at Emerald event center along Gen. Edet Akpan Avenue (Four-Lanes), Uyo, the Akwa Ibom State capital by 10am.