THE PURSUIT OF JUSTICE IS WHAT HELPS BUILD A GOOD SOCIETY, OSINBAJO SAYS TO LAW TEACHERS AT BUK 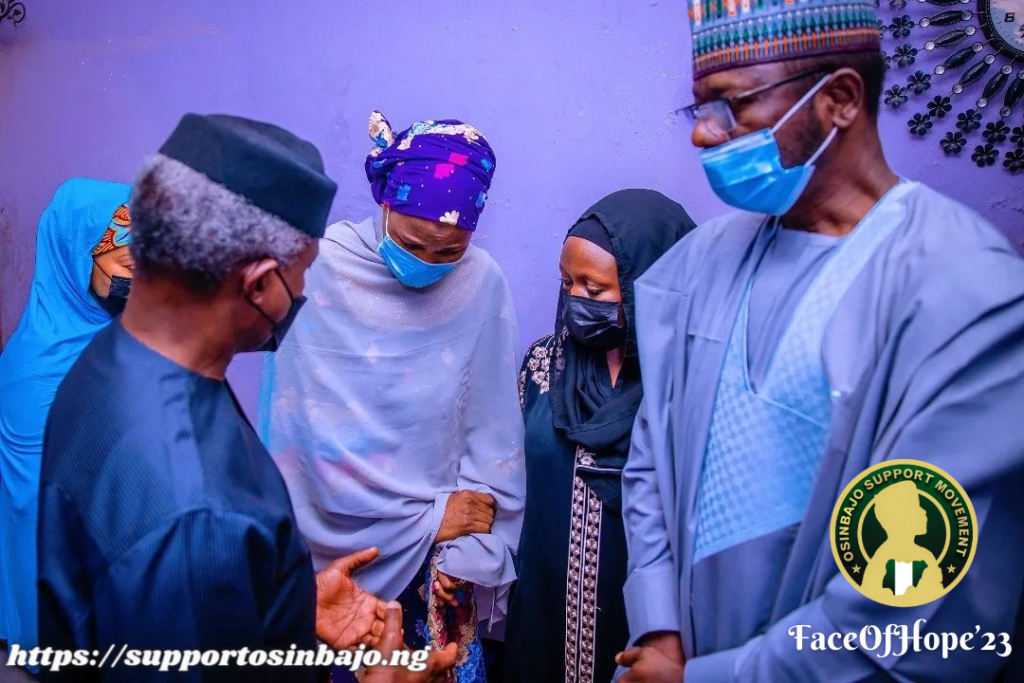 Democracy and social justice are vital structures required for nation building, because the pursuit of justice lies at the heart of the quest for a better society.

This is the more reason why the legal profession must maintain its integrity and ethos as it is one of the pivots civilization rests upon.

Vice President Yemi Osinbajo, SAN, stated this on Tuesday, at the 53rd Conference of the National Association of Law Teachers, held at Bayero University, Kano (BUK), with the theme: “Law, Democracy and the Electoral Process.”

After attending the conference, the Vice President decided to pay a condolence visit to the family of the kidnapped and murdered Kano pupil, Hanifa Abubakar at Yankaba, Dakata Junction, off Hadejia road, Kano State.

The Vice President, accompanied by Kano State Governor, Alhaji Abdullahi Ganduje, some members of the National Assembly, including Sen. Kabiru Gaya, among others, were received at the residence of the slain schoolgirl, by her father, Alhaji Abubakar Abdulsalam.

During the visit, prayers were offered for the departed and the VP expressed condolences on behalf of the President and himself to the family, especially the deceased mother, Murjanatu, and the father, both of whom were present at the visitation.

On his part, Alhaji Abubakar, father of the slain schoolgirl, expressed gratitude to the President and the Vice President for the visit and the condolences to his family over the killing of his daughter.

The visibly emotional father of the deceased, who summoned courage to speak to the press described the Vice President’s visit as an honour to his entire family, praying for God’s blessings on the President, the VP and for peace in the country.

According to him, “I am rather speechless, I don’t have enough words to quantify my joy and gratitude over the visit of the Vice President to my family to condole me.

“As I told him, it should be the other way round, the Vice President is our father; we are supposed to go and pay him a visit, not him coming to us. However, I am grateful, I am sincerely honoured. The only thing I will say is to pray for him and the entire nation, that peace will reign.”

While declaring the conference opened earlier, Prof. Osinbajo noted that democracy and social justice are closely linked, adding that the cornerstone of democracy is the insistence that “our society must be governed by the rule of law and not the whim of man.”

“As law teachers and legal practitioners, we are custodians of this truth. However, democracy cannot endure without social justice,” he said, noting that “the pursuit of justice lies at the heart of the quest for the good of society.”

He continued, “This makes the legal profession one of the cardinal vocations upon which civilization rests. Indeed, law is an instrument of pacific social engineering, the end of which is justice. When it is rooted in this postulate, it follows that the law and therefore democracy, are meant to serve beneficial social ends.”

According to the VP, “a society in which an increasing number of people consider themselves alienated from legal institutions or perceive these legal institutions to be incapable of delivering justice for all cannot be stable and prosperous.”

Without social justice, legal justice is ultimately unattainable, Prof. Osinbajo stated, adding that “our idea of social justice also refers to the social and economic rights of the people.”

He said these rights, according to the Constitution, include the right to food, shelter, employment, education and a reasonable national minimum living wage, care for the elderly, pensions, unemployment benefits and welfare for the physically challenged.

“The degree to which citizens are in possession of their social and economic rights has a direct impact on the degree of their access to legal services and, thence, to justice. Our concern as teachers and practitioners of the law, therefore, must extend beyond the courtroom, beyond the precincts of our legal institutions, to the social reality in which these structures exist.”

Speaking on government’s role in ensuring growth of democracy and social justice in society, the Vice President noted that “the principle of the dignity of the human person implies that governments must be considerate, egalitarian and universal in the sense that they must serve everyone.”

Again, he stated that this cardinal principle was a major reason for the Federal Government’s Social Investment Programmes.

The VP said the Administration will continue to ramp up its efforts in social welfare and expanding universal health insurance to ensure “that our most vulnerable citizens are not abandoned to the vicissitudes of fate.”

Also speaking on the essence of democracy and the need to preserve democratic institutions in Nigeria and other parts of Africa, the Vice President noted that even as Nigeria has enjoyed 22 years of unbroken democracy, the country is still a young democracy.

“We have witnessed a series of peaceful transitions of power. This is a huge credit to the democratic sensibilities of our people. Along the way, we are learning valuable lessons that can only make us better practitioners of liberty.

“Many of our institutions are still in their infancy, and we must carefully guide them into maturity. We recognize that the price of liberty is eternal vigilance,” Prof. Osinbajo observed.

He noted that the Electoral Bill now in process is testament to the Administration’s commitment towards improving Nigeria’s electoral process.

“The Bill itself has been the subject of robust engagement between the government and civil society. While some have expressed reservations about the time it is taking to enact the new law, we should remember that a truly inclusive democratic, deliberative process often takes time. I am confident that the legislation that emerges will be one that reflects a broad consensus between all the stakeholders,” he said.

The Vice President added that “while INEC continues to improve its capacity to conduct credible elections, particularly through the deployment of technology; we recognize that democracy is about much more than voting. It is also about constitutionalism, rule of law and respect for civil liberties. We must diligently work to uphold these principles.

“Our progress as a democracy must therefore also be prosecuted in terms of the struggle to reduce the basic problems of ill-health, malnutrition, illiteracy, and famine which daily afflict our people. Where social and economic rights are unsecured, people are unable to fully maximize their civil and political rights.”