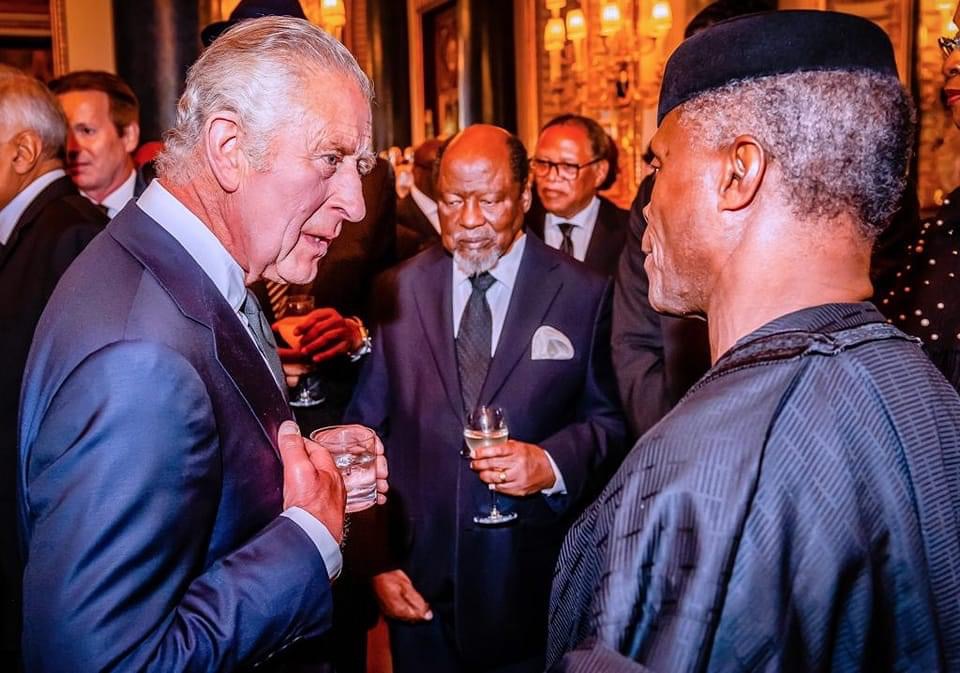 *VP wishes King Charles well, prays he “does even better than his mother”

The coming together of leaders from different parts of the globe to celebrate the live of late Queen Elizabeth II and attend her funeral is a show of solidarity and goodwill by people from around the world.

It is also a testament to the brotherhood of nations, according to Vice President Yemi Osinbajo, SAN.

Prof. Osinbajo stated this on Monday in London during a media chat with journalists after attending the State Funeral Service of the late Queen of England at Westminster Abbey.

According to the Vice President, “for countries like ours, for Nigeria and for the Commonwealth, this has been very ennobling, very strengthening.

“I am sure that King Charles felt not just the honour of having so many people come by, but also the reassurance that there is a brotherhood across the world and that the Commonwealth remains strong, a Commonwealth of free nations who willingly subscribe to coming together, to work together to achieve sometimes disparate political objectives but clear economic objectives.”

Speaking about the significance of the event, Prof. Osinbajo said “it is a historic event and one that is unlikely to happen, perhaps in another lifetime, just the sheer enormity of all that has happened and the gathering of leaders from everywhere, the good will, the good wishes, and all of that from practically everywhere around the world.”

“So, I think that this has truly been a testament to the sort of person the Queen was – in life and death, brought people together and perhaps even more so in death,” the VP added.

The Vice President then prayed for a successful reign for King Charles lll, noting that “one wishes King Charles very well indeed, and I think we are all anxious that he succeeds.

“And that he perhaps does even better than his mother, which is the hope of his mum. I am sure that the Queen will really hope that all her successors and in this case King Charles, will do better than she did.

“We are all looking forward to a wonderful reign, a reign that will bring prosperity, peace, not just to England, but to the Commonwealth and to all of us.”

Speaking further about the late British monarch, whom he earlier described as a Monarch for all seasons, the VP said “in the 70 years that she has been Queen, it’s obvious that through practically every cycle – war, peace, economic decline, apartheid, all the various cycles, where truly major things were going on, she held her own and she was always able to bring a certain degree of understanding.

“And just the gravity of someone who doesn’t hold political office is so well respected and well regarded. In so many ways, she was a factor in practically all of the various cycles that we have experienced, not just in the Commonwealth, but in the world itself.

Right after the Funeral Service at Westminster Abbey, the Vice President and all the foreign dignitaries-about 500- were hosted to a reception by the UK Secretary of State for Foreign, Commonwealth and Development Affairs, Mr James Cleverly.

The Queen’s funeral procession then proceeded to Windsor Castle where she would be laid to rest, passing through selected streets in London.