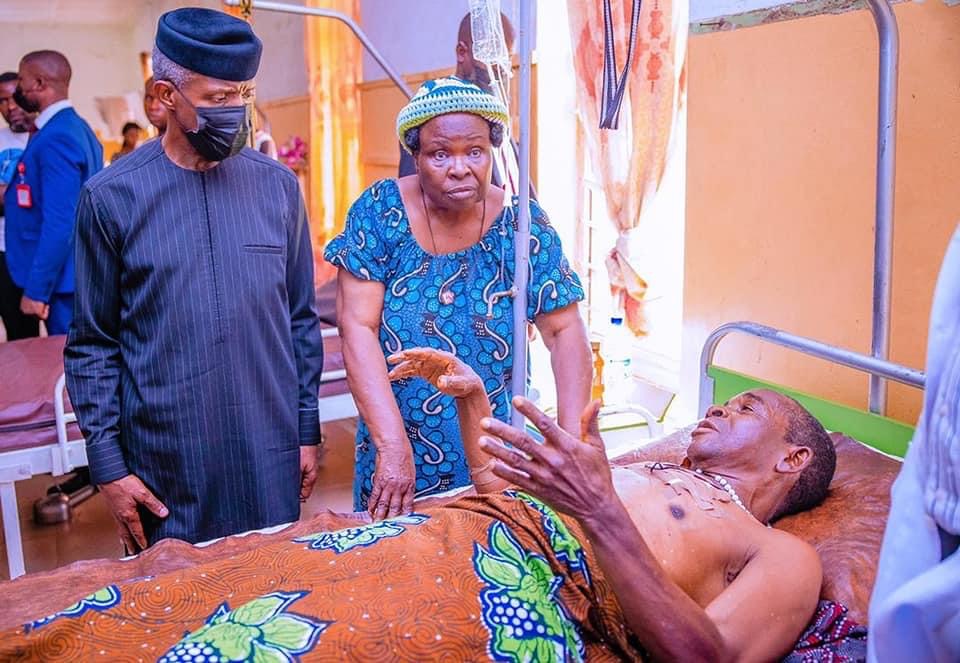 The perpetrators of the gruesome murder of parishioners at the St Francis Catholic Church in Owo Local Government Area of Ondo State, on Sunday will be fished out and made to face the full wrath of the law.

Vice President Yemi Osinbajo, SAN, stated this today when he visited Owo town and the Catholic Church to commiserate with the clergy, community and people of the State, following the horrific shooting incident yesterday where several members of the congregation were killed during a church service.

The VP also visited those who were injured at St. Louis Catholic Hospital in the town.

Describing the unfortunate incident as a terrible tragedy and unspeakable evil by depraved minds and terrorists, Prof. Osinbajo noted that “the President has already ordered a full-scale investigation of this crime. Without any doubt, those who perpetrated this will be fished out and they will pay for the consequences of this crime.”

The VP was received in Akure by the Ondo State Deputy Governor, Lucky Aiyedatiwa, and was later joined by Governor Rotimi Akeredolu in Owo.

During his visit to the palace of the Olowo of Owo, Oba Ajibade Gbadegesin Ogunoye III, and accompanied by Governor Akeredolu; Prof. Osinbajo told the traditional ruler that his visit was on behalf of President Muhammadu Buhari, who sent his condolences.

Noting the President’s statement condemning the dastardly act, the VP added that, “this barbaric act is one that has to be condemned by all. But more importantly, we must find the perpetrators and they must be punished, and we must set an example.

“Anyone who will go into a place where there are children, elderly people and shoot them, throw explosives at them, cannot be dignified by their description as humans.”

Expressing condolences to the traditional ruler, the entire community and people of the state, the Vice President said the Federal Government, through the security agencies, will ensure that the perpetrators are found and justice is done.

“This is the pledge that the Federal Government has made through the security agencies, that the perpetrators are found, and that we are able to discover exactly what it is that led to this situation in Owo, which, as you said, is a peaceful community that is not known for excessive behaviour. We need to investigate this thoroughly and find out exactly the situation,” he stated.

The Vice President commended the courage and resoluteness of the priest and the church’s congregation in handling the situation, despite the gravity and loss of their loved ones.

According to Prof. Osinbajo, “the words that they spoke show that they are the ones who truly represent us; those who say that, let us approach this calmly, let us find out what happened and punish the perpetrators.

“I’m also pleased to see that there is relative calm here and that people have decided …they will ensure as much as possible that they follow due process to ensure that all things are resolved positively.”

While acknowledging Governor Akeredolu’s efforts in tackling security issues in the state and his exemplary work, the Vice President said, “I will ensure that I take this message back to the President, and that you are supported in every way to ensure the security and welfare of the people of Ondo State.”

Similarly, while addressing youths in Owo outside of the palace, the Vice President urged them not to take matters into their hands, but allow the rule of law and justice take its course.

“I can understand how you feel, because that is how all reasonable people all over Nigeria feel. It’s a very terrible thing indeed. It should never be allowed to happen, and I understand how you feel about so many other things. Many have lost their relatives, families. We are still going to the hospital to see those who are injured, many of them are very badly injured from the account I have heard.

“As young people, we must understand that despite the security challenges, when there is trouble, we are the ones who must come together, not to fight, but to say, our country can be better than this; it is possible for our country to be better.

“The solutions lie, not just in government, but in all of us, especially young people. And I believe very strongly in Nigeria’s young people. We will eventually solve all of these challenges, and all of us will be involved.”

The VP reiterated the Federal Government’s resolve not only to find those who committed this grievous crime, but also to resolve security challenges across the country.

“The future belongs to us all, young and old. So, let us think of ways by which we can solve our problems. I can assure you that we will do everything in our power, not just to ensure that we deal with security in the forest, and we have been talking to Mr Governor, but that we tackle security issues everywhere.”

Earlier in Abuja, on his way to the airport enroute to Ondo State, the Vice President’s convoy came across an accident scene on the opposite side of the road. He then stopped at that point to lend assistance to the victim, and the convoy’s security and medical teams assisted in removing the victim from the crash, as the car had somersaulted and got stuck on a tree.

Prof. Osinbajo ensured that the injured was then transported to the Airforce Base Hospital before he proceeded on his journey to Ondo State.

The Vice President has since returned to Abuja this afternoon.