OSINBAJO WILL DECLARE, CONTEST AND BY GOD’S GRACE EMERGE AS THE NEXT PRESIDENT OF NIGERIA – YOUTH GROUP EMPHASIZES 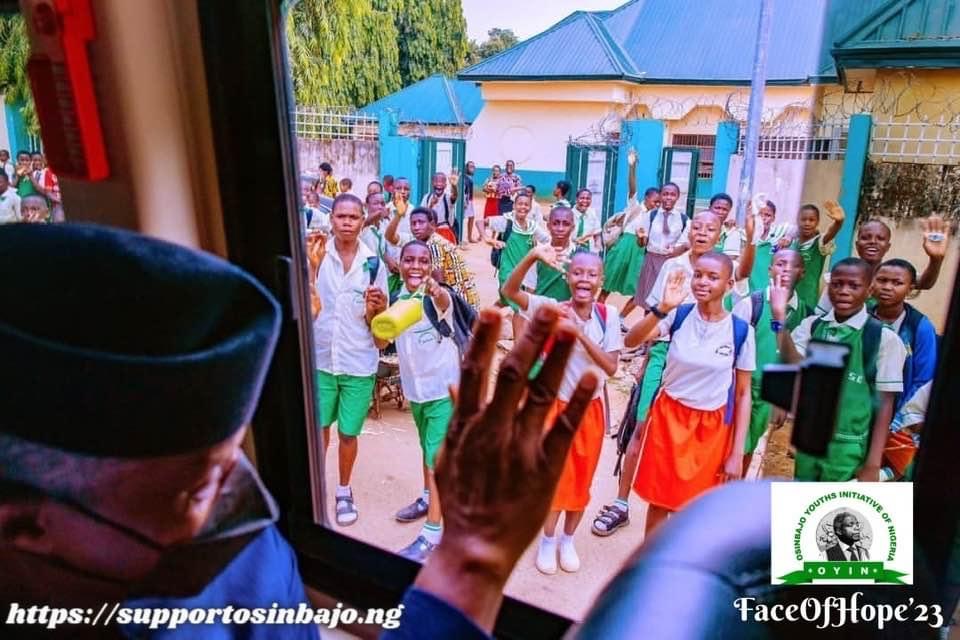 Around the general contemplation which is on daily basis rising and getting the attention of Nigerians from around the world on whether or not the Vice President, Prof. Yemi Osinbajo, SAN, will run for the seat as the next President of the Federal Republic of Nigeria.

There’s need to reiterate on the fact that the rate at which the masses have been clamoring for the Professor of law to declare his intention to run is actually the first of its kind in the history of Nigeria and as such, it is generally believed that if the Vice President eventually declares to run, then it means the June 12 general elections which has been the most free, fair and credible election in the history of Nigeria is ready to be erased for another history to take place come 2023. However, in the middle of the contemplation of either the Vice President is going to run or not, numbers of prominent youth figures has raised their voices in their respective opinions.

While addressing the press, Amb. Ruqayyah Muhammed, the National Coordinator of the foremost youths group in support of Professor Yemi Osinbajo; Osinbajo Youths Initiative of Nigeria (OYIN), stated that she alongside other leaders of the group has been inundated with the latest news flying around concerning the declaration of the Vice President whom some unscrupulous paid agents has been calling all sorts of names to make him feel unentitled to contest the seat of the President. Well, apart from the fact that the Vice President enjoys his right as a citizen to vote and be voted for, he still cannot be shaded to be entitled to toy or give up the country that needs his attention at the critical time as a reward for politics, because our country is too precious to us all than to be used as an item of reward for politicking, she said.

One thing I am very confident of is that the Vice President has always placed the interest of his country and duties above all other things and as such the yearnings of Nigerians of him to declare and run for the seat of the President come 2023 is very dear to him and I am sure he will take that into consideration and will not let us all down, so he will declare, he will contest and he will win the general elections and be sworn in to take over from his boss His Excellency, President Muhammadu Buhari. Amb. Ruqayyah emphasized.

Also was Hon. Ogunsakin Luqmon Akorede, the National Deputy Coordinator (Southwest) of the support group, who stated that Professor Yemi Osinbajo has been outstanding, energetic, dogged, tenacious and as we speak, he is currently the most intellectually endowed candidate that best fit the position as the next president come 2023, even though he is yet to declare to run.

“My reason is not far fetched because of his role as the current number two citizen of our country and whenever the president is not around, he has always stood in place as a committed and loyal ally through some of the measures he preside over in which was very visible to the blind, the significant improvement.

Ogunsakin Luqmon further stressed that, “the Vice President became a professor at his early 30s and since then he has functioned excellently in various capacities both in Nigeria, Africa and the World at large, all these traits are the records that has made the vice president show his capability of piloting the affairs of our great nation to the promise land and of course with him as the head we can always be confident that our country is in safe hands and will be a better place for all, hence I urge everyone who has genuine love of our nation at heart to rally round his support to make this a reality for the benefit of all,” he noted.

Ogbeni Ajibode Abdulkabir Olawale, the National Publisher of the group also supported the notion that the Vice President is very fit and sound to contest and emerge as the next president of Nigeria. Ogbeni Ajibode who said to the press that he has always been moved by Professor Yemi Osinbajo whenever he addresses a gathering at public functions, “whenever I see or hear him speak, I compare him to President Obama of United States of America” he said.

Ogbeni Ajibode Kabir further stated that, “I have always looked forward to a Nigerian president that addresses the nation so vibrantly as matters arise in Nigeria. And when I hear this Professor of law speak, I know he is always very conversant with every thing around him, so what else of a president do we want for Nigeria. Well to me, I believe it is only an enemy of Nigeria that will not want the Vice President to take up the mantle of leadership in succession of his boss President Muhammadu Buhari come 2023. And I believe he will not turn deaf ears to the yearnings of Nigerians at this time, so he will surely declare, contest and emerge,” he said.

According to the Assistant National Director of Student Affairs of the group, Comr. Fadeela Al-ameen Ibrahim, she said; “well, I support the Vice President in view of the fact that at this point our country needs a capable leader that will address the problem facing this great nation and I believe Professor Yemi Osinbajo will always be ready to ameliorate all issues, and he will surely make a difference.

“I am confident with the saying that ‘coming together is a beginning, staying together is progress, and working together is success.’ As we work together in making this dream come true, we shall succeed, by the grace of Almighty Allah,” Comr. Fadeela stated.

Hon. Abdulrahman Andoma Ahmad, the National Deputy Coordinator (Northcentral) Political Matters also opined that Prof. Yemi Osinbajo is a detribalized Nigerian with passion for a great and United Nigeria. He is not of the best of my human capacity and knowledge, a hypocrite, nor a bigot, but a well defined Christian gentleman, well cultured in Christ’s spiritual values, not giving to anti-Christ manipulations of religious dogma, as some of the fake practitioners and marketers of questionable faiths, whether Christians or Muslims so often indulge in the country, to brand their conscience less and unworthy characters.

He continued, “Prof. Yemi Osinbajo belongs to the group of patriotic Nigerians like President Muhammadu Buhari, and several of his close companions, that treat your values as assets, not your identity charts.”

Comr. John Osikpemhi Okhukpe, the National Secretary of the group also reiterated his support by saying; “as progressive Nigerians, we have seen the level of support the Vice President has been earning from across the country and for that reason we can boldly say that this is one time in the history of our dear country that Nigerians will be clamoring for competence and good quality in a leader against all differences, the wealth of experience and professionalism in the Vice President has earned him a global interest, so we are confident that with him, Nigeria will be greater than it has always been in the past.

Comr. John Mikel Ọgbọnna, the National Deputy Coordinator (Southeast), of the group also opined that, “at a very young age Prof. Yemi Osinbajo became a lawyer and a professor of law without stress. He was practicing law in Lagos and was called to head the judiciary as a Attorney General and Commissioner of justice without stress or lobby. He was busy with his law firm and he was called to serve as the vice president without stress.

“In the coming 2023 general elections, Professor Yemi Osinbajo will become the President of the Federal Republic of Nigeria without stress because he is a devine prefect,” he said.

As a Barrister of law and legal adviser to Osinbajo Youths Initiative of Nigeria, Hon. Barr. Hannatu B. Abimiku also shared her opinion as from experience, she stated that since her years as a legal practitioner, Professor Yemi Osinbajo has been one legal practitioner figure she has always looked up to, because she understands what it takes to be a practicing lawyer and also an academician who also has been engaging in series of duties most especially in governance, and as if all these is not enough, he has also proven to be a diligent servant who has always delivered excellently in all the mandates invested upon him. I can tell that he is a scholar per excellence and will do greatly as the next President of our country as it has always been in his records.

The National director of welfare, Hon. Shuaibu Sani was penned to have decided to support Professor Yemi Osinbajo to be the next President through his traits as a gentleman who has faced a lot and yet still stood firmly for progress and development of our nation, he is one symbol of peace and unity and despite been a man of God, he has never been caught of any misconduct and he is one amongst many Nigerians we all are yearning to come save our country for the better.

And to this end, it is evident to note that His Excellency, Professor Yemi Osinbajo, SAN, is one in a million figure, whom even without his declaration of intent to contest the seat of the President alongside other already declared candidates, has already been the bone of contention in the heart of the majority Nigerians across all works of life to take charge from his boss His Excellency, President Muhammadu Buhari.

PYO We Want, PYO We Shall Get!