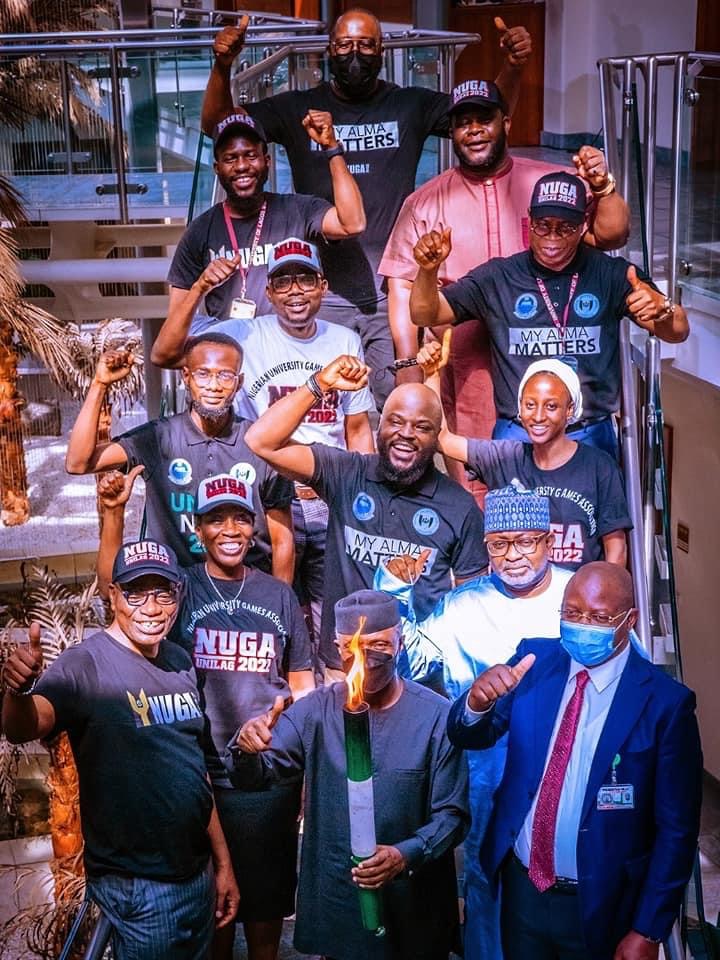 *Recalls how talents like Enyeama, Fasuba, Chukwumerije, others emerged from NUGA

Ahead of the commencement of the 2022 tournament of the Nigeria University Games Association (NUGA), Vice President Yemi Osinbajo, SAN, today received the games’ torch of unity, and recalled the exploits of great athletes discovered at previous editions of the competition.

The torch of unity, which is a symbol of the games, was presented to Prof. Osinbajo at a brief ceremony at the Presidential Villa earlier today.

The ceremony was witnessed by the Minister of Sports, Chief Sunday Dare, and Prof. Oluwatoyin Ogundipe, the Vice-Chancellor of the University of Lagos, the host of the 2022 games, among other officials.

According to the Vice President, “Indeed, the socio-economic value of the NUGA games is not lost on us. For years, the Nigerian University Games Association has not only provided a space that allows us see the value that every part of the country has to offer, it has also provided a platform for the discovery and honing of individual sporting talent, many of whom have gone on to represent Nigeria successfully on the world stage.”

“We encourage the athletes who will be competing this year and representing their respective universities to do so proudly and in true sportsmanship. This is only a prelude to bigger achievements and greater laurels for yourselves and for Nigeria,” the VP added.

The Vice President then recalled the achievements of some athletes discovered at the games: “going through Nigeria’s sporting history and almost everywhere we have excelled on the global stage, you will find athletes whose talents were nurtured in our universities and given a competitive boost by NUGA at one time or the other.”

He said “the now legendary Nigerian goalkeeper, Vincent Enyeama, who we fondly remember for his role in leading the Super Eagles to victory in the 2013 Africa Cup of Nations, and who in his prime was considered one of the best goalkeepers in the world, was once a university athlete and a proud product of NUGA’s talent pipeline.

“Olusoji Fasoba, who won 100 meters gold, running for the Obafemi Awolowo University at NUGA many years ago, eventually went on to anchor Nigeria’s bronze medal win in the 4 x 100 metres relay race at the 2004 Olympic Games, and until recently, was the African record holder in the 100 metres.

“And, of course, there is Olabisi Afolabi, the famed NUGA alumnus from Ilorin, who helped Nigeria to a silver medal in the 4 x 400 metres at the 1996 Olympics in Atlanta, the highlight of a very successful athletic career, which included gold at the World Junior Championships in 1994, silver at the 1999 All-Africa Games, and bronze at the 1995 All-Africa Games.”

Continuing, the VP noted that “how can we forget Chika Chukwumerije, a shining symbol of excellence and commitment to craft, who inspired by his gold medal-winning performance at the 2002 and 2004 NUGA games, would go on to represent Nigeria at two Olympic finals and earn us our first taekwondo medal at the Olympics.”

The VP also listed the “former Super Falcons Captain and goalkeeper Precious Dede; Nkiru Okosieme; Edith Agoye; Adeolu Adekoya who competed for UNILAG; the famous Mutiu Adepoju, who played for the University of Ibadan, and Seyi Olonfijana, who competed for LAUTECH once upon a time.

“Then there was Edema Fuludu who played for UNIBEN and became a key part of the Super Eagles winning squad in 1994; Akinshola Simeon and Aminat Ilori, both from LASU, who now play for our national Badminton team; Olumide Oyedeji who went on to become an NBA star and later captained the Nigerian national basketball team D’Tigers; and so many others.”

While commending the UNILAG management for the good job in preparing for a successful games, the VP restated the commitment of the Federal Government in sports and youth development, noting that “we are committed to ensuring that you receive all the support you need at every stage of your exceedingly promising careers.”

Earlier in his remarks, the Minister of Sports reiterated the commitment of the Ministry towards providing opportunities for young Nigerians to excel in their chosen disciplines, including sports, commending the support of the Vice President for youth and related issues.

“His Excellency, the Vice President is not only young at heart, but has actively supported and participated in every youth initiative, ” Dare noted.

Recalling the VP’s parting words at a youth summit in November 2021, Mr Dare said, “I recall the final seconds of the speech which resonated not only with the youth in the hall, but youths that were watching us online.

“When you challenged our youths that, whatever happens you just have to move, you have to do something. Your Excellency, I want to thank you for your support for youth development in various ways.”
On his part, the UNILAG Vice Chancellor, Prof. Ogundipe, said more than 10,000 students are expected to participate in the games scheduled to start on March 16. He also announced plans to boost commerce around Lagos, the host city, during the games.

“Today we brought the torch of unity to the Vice President who is also an alumnus of the University of Lagos and we are expecting nothing less than 10,000 students during this competition which will start, March 16 to March 26, 2022.

“Another thing is that we are going to showcase to the world that, apart from some of the negative things they read about this country, Nigeria is a country with talent and potential, that we want to exhibit.

The VC expressed appreciation to the VP, “for this opportunity. I want assure you that we are ready to put in the best competition and to revive NUGA.”

The highpoint of the event was the presentation of the “torch of unity” and the NUGA shirt to the Vice President by the Games officials and the UNILAG VC.