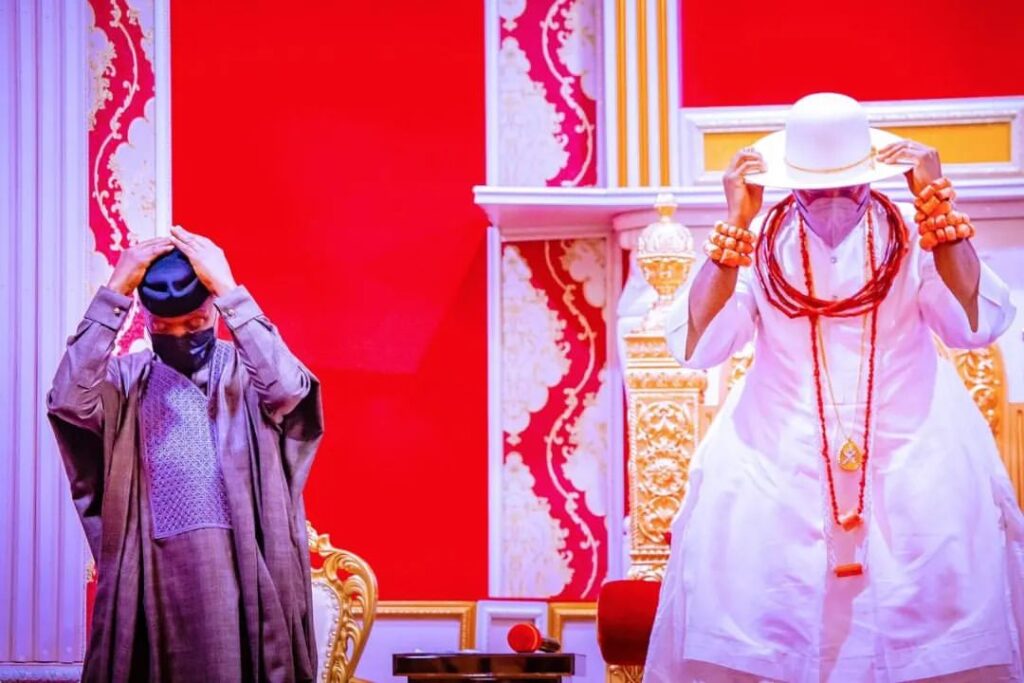 *Olu of Warri to VP: You are doing a good job supporting the President, putting Nigeria first

*Buhari, Osinbajo always been there for us – Ovie of Uvwie

With the number of security challenges facing the country in recent times, the collaboration between traditional rulers across the country and Government at all levels is even more critical now so as to improve security nationwide.

At both palaces, the VP, who accompanied by the Delta State Deputy Governor, Kingsley Otuaro, and the President of the Nigerian Bar Association, Mr. Olumide Akpata, was welcomed with drumming, dancing and singing with much fanfare and in a festive atmosphere.

Before stopping at the palaces, the Vice President attended the Thanksgiving Service, in Effurun, Delta State, in honour of the late elder statesman and member of the Second Republic House of Representatives, Chief Patrick Emurode Sito Ideh, who passed at 95.

Aside from the major roles of the security agencies in ensuring security, the Vice President observed that traditional rulers in the country also have vital roles to play in their respective communities because of their moral authority.

“We recognize that the traditional rulership of our country holds a moral place in the live and esteem of our people, and it is that moral place that we, very frequently, have to call upon, in order to mediate some of the conflicts that give rise to the security challenges that we have,” he said.

The VP further highlighted the critical role traditional rulers in the State played in resolving disputes in oil-producing communities.

“For example, the deputy governor and I have worked extensively in some of the conflicts in oil-producing communities that had led to a decline in oil production, and we did so by going round to speak to various communities.… we were able to achieve results just because the traditional rulership took it upon themselves to be front and centre of mediating these disputes.

“I think that the times that we are in also calls for that kind of intervention; and I will respectfully urge you to take this on, as a major task, because, just as have been mentioned, our country depends a great deal on oil production,” he said.

“Frankly, when you look at the sheer number and range of those security challenges, it is evident that that it is necessary to have a leader such as President Buhari to be able to even take on those challenges.”

While again congratulating the Olu of Warri on his ascension, the Vice President stated that “the ascension to the throne of your fathers would be for the benefit of the community and nation.”

“I want to say that the reason, first, is because you bring to this stool, not just the energy and farsightedness; but more importantly, your antecedents in business, in innovation and entrepreneurship. So, many are looking to see how this will benefit not just Warri but also our nation.”

“We, the Federal Government, have several initiatives, especially initiatives for entrepreneurship and innovation for young people; not just in technology, but also in your area of oil and gas. So, there is a lot I hope that we will be able to do together,” he said.

In the same vein, at the Ovie of Uvwie’s palace, the VP acknowledged the role of traditional rulers, including the monarch, in keeping law and order and maintaining peace in all their communities.

“This was a place that was known for a bit more turbulence than many other parts of the state. But today, we see that it is a very peaceful community; a peaceful kingdom and it is all on the account of the fact that there is a moral orbit that only the traditional rulership can operate in; and even our laws; fidelity to our laws is really first and foremost, based on the foundation of people’s respect for law and order as proffered by the traditional rulership.

“Going by the track record that we see even in this kingdom, it is very evident that your role has been instrumental in keeping the peace here. We are extremely proud of the work that you are doing. I think it is a good example and a good way by which we can continue to propagate the importance of traditional rulers in governance in Nigeria.”

In his opening remarks, the Olu of Warri described the Vice President’s visit as a ‘homecoming,’ and thanked the VP for his good works as President Buhari’s deputy and for ‘putting Nigeria first.’

“We thank you for the good work that you have been doing; supporting the President and putting Nigeria first. Please be assured that our prayers are continually with you and with the nation in general.

“It is our prayer that the Lord who brought you here safely will take you back safely and in all your endeavours going forward as your administration finishes in the next one year. You will finish strong, you will finish well; and by the Grace of God, I am sure we will be seeing more of you in different capacities, and we look forward to that.”

Similarly, the Olu of Warri acknowledged that traditional rulers should, indeed, be bridge-builders between government and the people.

He said, “We want to once again, present ourselves as the number one partners with the federal and state governments… we are looking forward to having discussions with the Federal Government and governments in general so that we are able to think outside the box to maximize the best for our people going forward.

“We, as a people, have always been law-abiding; we always work with security agencies and we will continue to do so. Please, let the President know that he can call on us and he has our full cooperation.”

In his remarks, Ovie of Uvwie thanked President Muhammadu Buhari and the Vice President for the respect they show to the country’s traditional institutions.

“That is the respect you have for traditional rulers; you have always been there for us. I am the Chairman of the National Traditional Rulers Summit in Abuja. The last summit we held, you represented the President; you physically came and stayed with us throughout the summit. Not only that, you gave us a lot of advice during that summit; in my community, we are working on that,” he said.

Earlier at the thanksgiving service in honour of late elder statesman, Chief Ideh, the Vice President said Delta State and Nigeria has lost a true leader who embodied a “rich example of service, fidelity to truth and justice, high patriotism and a strong social conscience.”

The Vice President noted that the late Chief Ideh, “despite being well rooted in his community, remained very vested in the trajectory of his country and took on the mantle of elder statesman with the same dignity and grace that had defined his entire life.”

According to the VP, “If there is a single word that defines this great son of Urhobo Kingdom and Nigeria, it is, in my view, service. His life, laden with illustrious accomplishments of the highest order, was an elegant testament of his devotion to service. He earned his achievements through an unflagging diligence.”

“Chief Ideh’s dedication to his people meant that, for him, personal achievements were not enough. He had the skills, tenacity and the drive to have committed himself purely to his own enrichment and success. But he had the social conscience and moral intelligence that instead committed him to a much grander cause – that of the people of the Midwest Region and Nigeria at large.”

Extending the warm felicitations of President Buhari to the family of the late Ideh and people of the State, Prof. Osinbajo said the President and himself “witnessed first-hand the breadth of the esteem in which he was held when he organized townhall meetings for us during the campaigns.”

At the time of his passing, Chief Ideh was the oldest legal practitioner on the Supreme Court roll call in the South-South region.

Commiserating with the family of the late Chief Ideh and the people of the State, the Vice President noted that the late elder statesman lived a life truly well spent.