“OSINBAJO & BABA BUHARI, WE HAVE COME WITH THE SONG AGAIN” – KANNYWOOD STARS 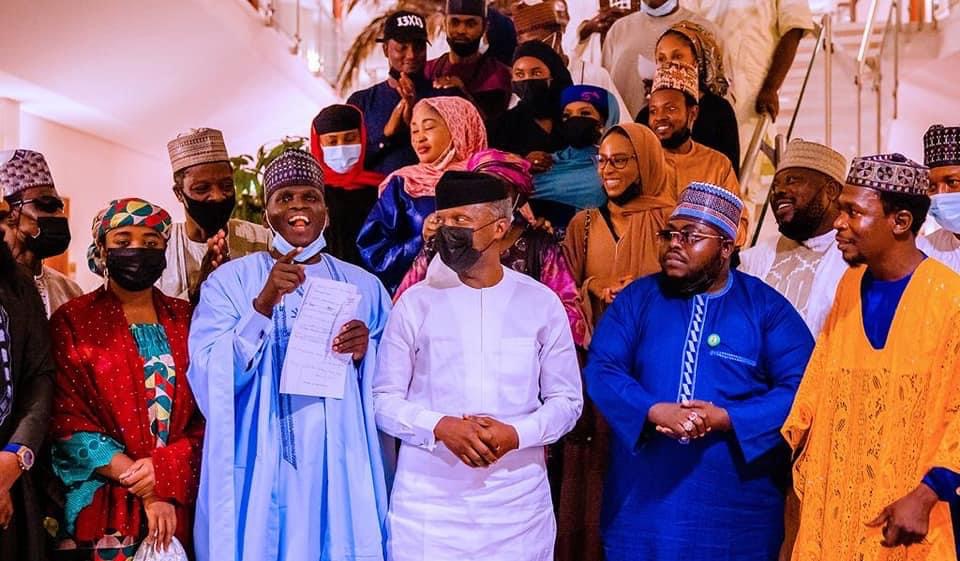 They sang indoors and outdoors at the Presidential Villa yesterday evening but the tune and lyrics were the same: President Muhammadu Buhari’s Administration has done well and his deputy, Vice President Yemi Osinbajo is the President’s ‘personal person.’

A large delegation made up of notable artists, musicians, entertainers and creatives from the Northern parts of the country paid a courtesy call on the Vice President with commendation for the administration while also tabling their requests to further spur their industry.

While receiving the delegation, Vice President Yemi Osinbajo, SAN, stated that a country’s most important resource are its human resources, and Nigeria must place a premium on this because its talents are the country’s biggest export and significant investment.

Prof. Osinbajo said this on Wednesday evening when he received at the Presidential Villa, the Kannywood delegation.

They came under the auspices of a group named 13 x 13 Awareness Group led by Kannywood personalities, such as Alhaji Dauda Adamu Rarara, its President and Yakubu Mohammed, spokesperson, among several others.

During the meeting, the Kannywood group delivered a special song filled with commendation for the work and accomplishments, while also chorusing that Prof. Osinbajo is together with “Baba Buhari.” The song was led by Yusuf Haruna, a.k.a Baban Chinedu, a Muslim actor who features as an Igbo character in films.

The lyrics of the song sang in Hausa is translated into English thus:

Verse: “Youths, everyone, come out, from the cities to the rural areas, let’s do Osinbajo and Baba Buhari.

In the past, we brought you this song, now we have come with the song again, Osinbajo and Baba Buahri. Buhari is fixing the country for us”

The Kannywood actors praised the leadership, dedication and wisdom of the Buhari-Osinbajo administration.

Pointing out some of members of the delegation whose works he had encountered such as veteran Kannywood actor, Rabiu Rikadawa, among others, in the room yesterday, the VP said, “I think one of the best things that our country has is talent, very solid talent. Sometimes we make the mistake of not exhibiting our talents enough, not showing off our talents enough and it’s a big mistake because this is our best resource.”

He stated that some countries do not have any mineral resource, but their best export is their human resource, adding that the creative sector is a very powerful tool of influence in any nation, and can be used effectively to advance social causes and nation building.

“I like the film industry. I enjoy comedy, I enjoy songs in whatever language, and I’m sure there are so many who are interested. Even sometimes looking at a video when you don’t even speak the language, you look at a video you’ll laugh because you know that it is funny.

“The usefulness of your talent is not just for a small set of people, but it is for everybody because your contributions are very important,” the VP stated.

He expressed happiness “to see all of us who are here, people who are using their talents to invest as they can.”

The VP then discussed how the entertainment industry can be supported to do even more. His words: “we can do more, if we are supported, supported by government, supported by the private sector, but the question is how, how are we going to do that? I want us to take this meeting seriously so that we can have a meeting to advance what we have been talking about.”

Despite the challenges of insecurity, insurgency, the Vice President stated that Government would continue to explore ways to support the creative sector and improve other aspects of national life.

He stated how despite two recessions and the socio-economic effects of the COVID-19 pandemic, the President Muhammadu Buhari’s administration has shown firm resolve and commitment towards improving the economy and welfare of all Nigerians.

Prof. Osinbajo noted that the Buhari administration will continue to ramp up efforts to improve security across the country.

“We are still fighting insurgency, Boko Haram insurgency and ISWAP, then we have banditry here and there in the North-West and things like that. All of these have occurrences in the life of a nation. Every nation runs into trouble, but it is the government at the time that must take the responsibility.”

He also emphasized on the commitment of President Muhammadu Buhari to better the lot of the country, noting that the President is a honest leader.

“We are very fortunate that God gave us a leader like President Muhammadu Buhari at the time we are facing. And the reason why I say so is because, you see, if we don’t have a steady hand, matured person who understands a lot of things and who is respected by the people, there will be more chaos and we won’t even know where this will end.

The leader of the delegation Alhaji Rarara recalled how some of the delegation members including himself, have been actively supporting the Buhari administration. He also praised the government for many of its laudable programmes that has touched so many people but added that more needed to be done.

“We know both yourself and the President are committed to the people and are alligned. That is why we are still with you.”

In his remarks on behalf of the group, Yakubu Mohammed, the spokesperson also added that the group has been supporting the Buhari administration and will continue to support the government. He solicited for government assistance in helping to address some of the challenges the industry is facing especially in the area of financial enablement.

He said the activities of the group are funded solely by its members, but lamented that their industry is lagging behind. In specific response, the VP said he is looking forward to working with the group to resolve the challenges of the industry.