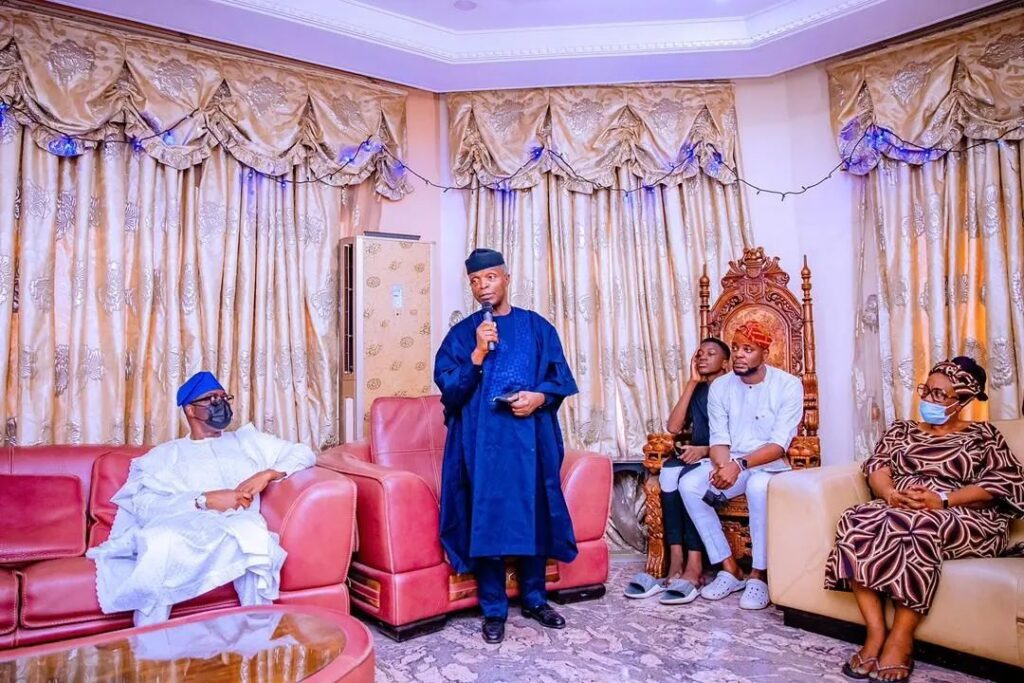 The Late Soun of Ogbomosoland, Oba (Dr.) Oladunni Oyewumi, Ajagungbade III, was not just a much loved and respected monarch, an astute statesman, and a great leader among Yoruba Obas, he strongly believed in a united Nigeria and the immense benefits therein, according to Vice President Yemi Osinbajo, SAN.

Prof. Osinbajo stated this on Sunday in Oyo State, where he attended the thanksgiving service held in honour of the late Oba at the First Baptist Church, Ogbomoso.

The Vice President, who was accompanied by the Oyo State Governor, Seyi Makinde, also paid a condolence visit to the Soun’s palace to meet members of the family.

Also while in Ogbomoso, he paid a condolence visit to the family of former governor of Oyo State, the late Otunba Adebayo Alao-Akala, where he was welcomed by the late governor’s wives, Chief Mrs Florence Alao Akala, and Mrs Oluwakemi Alao Akala.

Later in the day, the Vice President proceeded to Ibadan where he went straight to the Palace of the Olubadan of Ibadan, the late Oba Saliu Adetunji, who passed away earlier this month.

Speaking at the Thanksgiving Service for the late Soun at the First Baptist Church Ogbomoso, the Vice President, described the late monarch as a detribalized Nigerian whose “success in the North despite his Yoruba origins strengthened his belief in the huge benefits of unity in diversity and he practised his brotherhood of all regardless of race or faith faithfully all his life.

“While he lived in the North, he won the respect of all including the Sardauna of Sokoto who nicknamed him “Ciroma!”

The late Soun of Ogbomoso was 95 and his reign lasted for 48 years, a lifetime the VP observed, was one of significant impact with indelible footprints.

“I know that no matter how long our loved ones live, we all still want them around for longer especially when they have been so consequential and have made such a significant impact in our lives

“Oba Oladunni Oyewumi had an exceptionally long, peaceful, and progressive reign, for which we must just continue to give thanks to God Almighty. Having ascended the throne on the 24th of October, 1973, he has delivered four decades and eight years of exceptional and transformational leadership, leaving behind the indelible marks of peace and prosperity.”

On behalf of President Muhammadu Buhari and the Federal Government, the Vice President extended condolences to the Oyo State Governor, Seyi Makinde, the late Oba’s family, the entire Royal Family, as well as all the people of Ogbomoso.

The VP disclosed that his first formal interaction with the late monarch was when the latter was Patron of one of the foremost centres for local and international training in law and commerce, the Centre for Law and Business, which was founded by his son, Prince Dapo Oyewunmi.

“I along with Professor Oyelowo Oyewo SAN, current Attorney General of Oyo State were privileged to serve on the board. His stature, wisdom, and maturity were important in laying the solid foundation that the organisation now enjoys both locally and internationally,” he said.

Prof. Osinbajo further noted that the late Soun was a thoroughbred leader who dedicated himself to the people of Ogbomoso, for both their social and human capital development.

Noting that the late monarch’s reign brought commendable development to Ogbomoso, the VP added he made remarkable contributions to both his domain and Nigeria as a whole.

The VP stated that the late Soun not only stood out from his peers, but only a few in Nigeria were also recipients of two national honours, as he was.

Eulogising the attributes and values of the late Soun, the Vice President observed that many referred to the late monarch as “man of the masses” because, aside from the development he brought to the town, he gave his people free access to his wealth and wisdom.

Prof. Osinbajo recalled that the late Oba Ajagungbade III was an astute businessman who ventured into different trading activities including Aso-Oke and other merchandise trading.

The VP added that “he later became an agent for big international conglomerates and interacting with many European business concerns, especially during his time in Jos.

“He soon acquired a reputation as an honest trader, and he did so well that the European community soon came to know of his business acumen. Before long, he became “the wealthiest African in Jos.”

Prof. Osinbajo noted that the “progress of his domain meant everything to him. Indeed, he was once reported as saying ‘the progress of Ogbomoso is my motto,” adding that the late Soun was not just renowned for his business acumen, but also for his attitude of contentment and honesty.

“Another lesson we should learn from the life of this great monarch is that hard work and honesty pays. But we must also note that while contented with outcomes, he was never one to sit idly doing nothing. He always made his plans diligently and meticulously. Then with remarkable diligence, he always made all the efforts necessary to see them to fruition,” the VP said.

Prof. Osinbajo concluded that “true to his name, the Ajagungbade III has lived and has conquered for his people. He conquered illiteracy, and underdevelopment, he loved the people, he served his community, and remains a source of inspiration to all, including many who had served this country in the highest offices, who regularly sought his counsel.

“He was father to all and he held his place with dignity, neutrality and selfless commitment. While he would be missed, let us all be comforted by the good memories he left for us all.”

At the condolence visit to the Alao-Akalas, the Vice President stated that the late governor was very generous and is widely regarded as a titan in Oyo and Nigerian politics.

“But I think it is his persona that has endeared many to him. A very generous, kind-hearted and very decent human being, and that is what I deeply appreciate about him. When in 2015 I was nominated as the Vice-Presidential candidate of the APC, one of the very first people that I consulted was Chief Alao Akala,” stated Prof. Osinbajo.

Condoling with the family, friends and associates of Alao-Akala, the Vice President prayed that God will comfort them.

“He has left such an incredible legacy, shoes too big to fill, I know that the Lord will help you to carry the weight and all that he has left behind,” the VP said.