ONLY LEADERS INSPIRED BY HIGHER PURPOSE, NOT PERSONAL PROFIT, CAN BRING ABOUT NATIONAL TRANSFORMATION – OSINBAJO 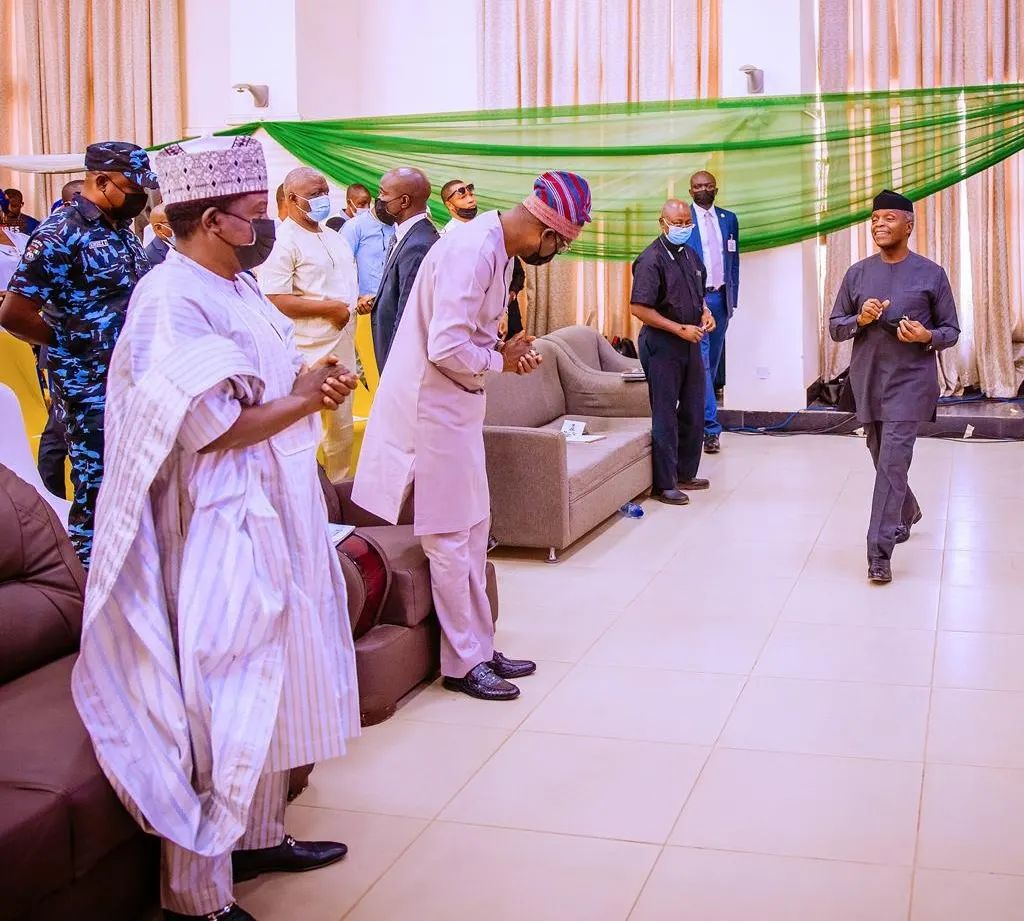 “History teaches us that everywhere there has been a national transformation, it has been brought about by public-spirited men and women of goodwill who, inspired by their belief in a higher purpose other than their own profit, have entered the public square to champion the common good, “according to Vice President Yemi Osinbajo, SAN.

He spoke on Friday at the 1st Annual General Assembly of Catholics in Politics and Catholic Business Leaders, were in a rousing speech, he highlighted the imperative of servant leadership and transformational leadership at different levels in society as a force for the common good.

The summit, otherwise known as the AGORA Conference, had the theme: “The Advancement of the Common Good towards Justice, Unity, Structure and Development of Nigeria.”

Speaking on the theme, Prof. Osinbajo was of the view that transformational leadership, particularly in a multi-ethnic and multi-faceted country like Nigeria, is needed across all levels of government and spheres of society, as its primary focus is the pursuit of the common good to ensure fairness, justice, unity and development in a nation.

According to the VP “building credible institutions of justice, the rule of law and orderly society are crucial expressions of the pursuit of the common good.”

Recalling the words of His Holiness Pope John Paul II during his visit to Nigeria in February 1982 in an address at the State House in Lagos, the VP stated, “only the harnessing of all the forces for the common good, in true respect of the supreme values of the spirit, will make a nation great and a happy dwelling place for its people.”

The Vice President who stated that the common good as an imperative of public policy and governance was articulated by the second chapter of the Nigerian Constitution, said, “the challenge of actualizing the common good is coterminous with our quest to actualize the Directive Principles and Objectives of State Policy. Achieving both requires transformational leadership across all levels and spheres of our society.”

Highlighting why transformational leadership is critical to national life, the VP noted that it will spur positive changes across all sectors and spheres of society.

He added that as a model of leadership, transformational leadership operates by serving and uplifting others because it is servant leadership.

The VP noted that the “purpose of power is service, not domination; it is to uplift and empower others rather than to control or oppress. This is a model of leadership that is inseparable from our conception of the common good.”

“The common type of leadership will seek the path of relevance and popularity within their own ethnic or religious camps by seeking only the good of their own. The servant-leader will serve his people by emphasizing the letter and spirit of the gospel, that even our worst enemies were still made in the image of God

“Transformational leadership means that we do not mourn and condemn the killing of those who belong to our own tribe or faith alone, or seek justice for ours alone, because all men are equal before God, and that the pain and anguish of a mother’s loss of a child, is not different from one faith or tongue to the other.”

One of the ways to cultivate the values that promote the common good, that seeks out the good of others, is in the delivery of justice and cementing the foundations of integrity in society, the Vice President noted.

Said he “the most progressive expressions of faith are concerned with justice and justice is impossible without taking the institutions that govern public life into account. In this sense, the purpose of governance and public policy is to establish a paradigm of justice that is measured by how well society deals with its most vulnerable members, settle disputes fairly and speedily, meting out punishment to violators of law without bias or fear.

The VP further observed that “our courts of law must be courts of justice. It means that we must pay attention to the quality and calibre of the men and women who are appointed judges. We must be concerned with their remuneration, and welfare. We must be unrelenting on insisting on their integrity.”

Prof. Osinbajo also described corruption as a “cancer” noting that “the cancer in governments anywhere is corruption.
“When public officials, (be they high or low in the executive, legislature or judiciary) are toll gates for the extortion of the populace while seeking government dispensations, the common good, happy and prosperous lives for the people is impossible.”

He added that the pursuit of the common good must “involve a relentless pursuit of integrity and transparency of public officers, we must think through the systems that will reduce human discretion in public-facing institutions. So we must, as a collective, condemn and call out corruption and corrupt practices.”

Prof. Osinbajo also encouraged Nigerians not to despair, despite some of the challenges, but have hope and belief in the promise of a great nation while urging that Nigerians must be willing to pay the price to achieve national greatness by actively pursuing the common good of all, regardless of tribal and religious differences.

Continuing, he said “fulfilling the immense promise of our nation requires men and women of goodwill from various communities and faiths to collaborate in advancing the common good. This is all the more important because it is such coalitions that can heal society of the wounds inflicted by the crude identity politics of religion and ethnicity.”

According to the VP, “our future will be shaped by how well we make common cause with other citizens of progressive persuasions to transform our communities,” even as he emphasized the importance of forging collaborative partnerships “not only within ourselves but with other forces which are committed to the common good to positively impact society.”

“Our greatest adversary in our task of national renewal is a feeling of hopelessness – a sense of futility that seems almost overwhelming. However, we cannot afford to even indulge in such despondency and despair. There is hope and there is much work to be done.”

Nigeria will overcome its challenges and rise again, the VP added.

“Contrary to opinion in some quarters, this house will not fall. It is being built and needs yet many more people to commit to building the sort of nation that we want. The throes and pangs of birth must not be interpreted as the pains of impending death. We are by the grace of God, more than able to overcome our present difficulties and we will overcome them,” the VP concluded.

Laolu Akande
Senior Special Assistant to the President on Media and Publicity
Office of the Vice President
28th January, 2022