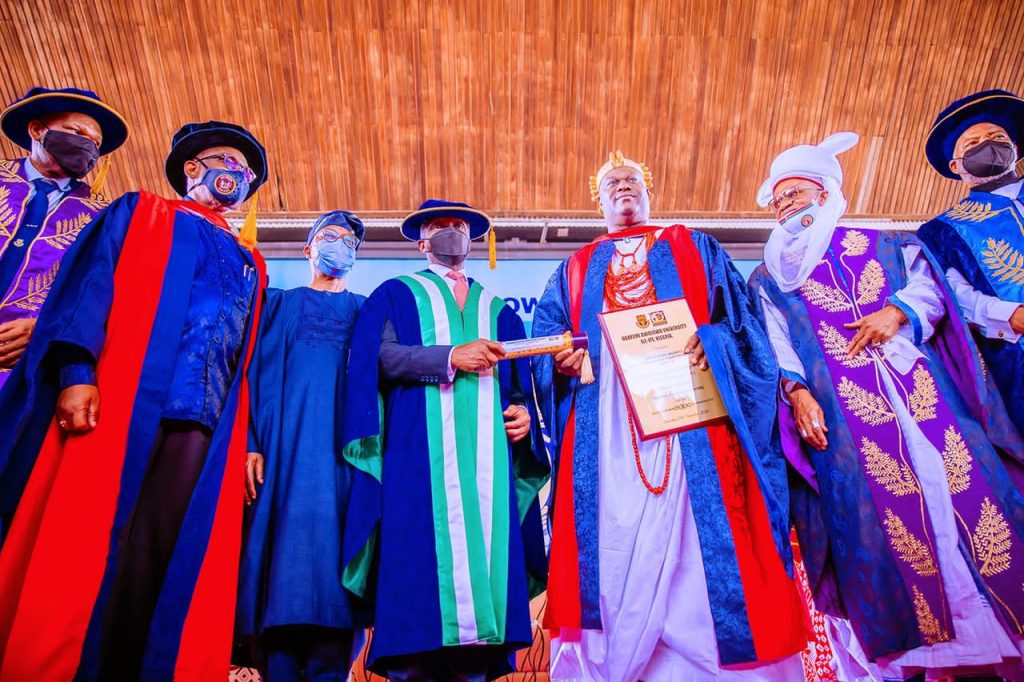 Even as the Federal Government’s National Development Plan 2021-2025 aims to chart a path for the county’s future, Nigeria’s young generation can find solutions to present and future local and global challenges, with the right ideas, innovation and application of technology, according to Vice President Yemi Osinbajo, SAN.

Prof. Osinbajo, who was speaking today at the 60th anniversary of the Obafemi Awolowo University (OAU), Ile-Ife, in Osun State, also told the graduating class that the future belonged to them, urging them “to pay attention to it.”

The Vice President, who was the Special Guest of Honour at the convocation ceremony of the University, stood in for President Muhammadu Buhari as Visitor, and was accompanied by the Osun State Governor, Gboyega Oyetola. While the Ondo State Governor, Rotimi Akeredolu, delivered the Convocation Lecture at the event presided over by the Etsu Nupe, Alhaji Dr. Yahaya Abubakar, as Chancellor of the University.

According to the VP, while young Nigerians, particularly the OAU graduands, stood on the shoulders of great men and women before them, the onus is on their generation to “deal with the biggest issues that confront the world, and our nation.”

“And it is big and innovative ideas that will solve those problems. You will have to confront the problems of climate change and a world moving away from fossil fuels, and you will usher in the age of renewable energy and green solutions,” the Vice President noted.

He added that this generation of young Nigerians are equipped and could proffer solutions in the areas of education, agriculture, health care and security.

“Yes, the challenges are huge, but you are well equipped to resolve them; and the evidence is there… Since 2016, despite two recessions, young Nigerians have built 6 unicorns; a unicorn is a company that is valued at over a billion dollars,” he explained.

The VP added, “You will deal with the issues of feeding, educating, providing healthcare and jobs for the fourth largest population in the world in a few decades. We will need smarter Agric solutions to feed the huge numbers, technology is already helping to crowd-fund Agriculture and develop more prolific seedlings.

“You will confront the need to vastly improve our public and clinical healthcare. We must build on the work of the Genomic Centre at Ede, and the local vaccine production efforts going on already and make local drugs for hundreds of millions of Nigerians.”

In education, while noting that the sector needed several new solutions, including designing methods to teach millions even outside of classrooms, the VP stated that “there are many young men and women already doing great things using technology to reach children in far flung areas with education.”

The Vice President added that the use of technology and improvement in nationwide policing would further help the country address its security challenges.

“The insecurity problems we are experiencing, the rise of terrorism in several parts of this large country and access to modern weaponry by non-state actors tell us that we must be smarter in policing the country, using smart drones and surveillance equipment. The politicization of importation of arms tells us that we must manufacture our own arms.

“Already Proforce, led by Ade Ogundeyin, is manufacturing APCs and MRAPS in their factory in Ode Remo and exporting. So are Imperium, and the government-owned DICON (Defence Industries Corporation of Nigeria) producing different types of munitions. The future is smart weapons benefiting from A.I. and machine learning,” he said.

Prof. Osinbajo then praised the vision of the University’s founders and management in driving the academic excellence for which the Obafemi Awolowo University is known, an institution, which he said has produced great thinkers and leaders throughout its history.

Copiously quoting the late sage, Chief Obafemi Awolowo, for whom the university was renamed, the VP recalled that “Chief Awolowo, for many years Chancellor of the University, gave some of the most memorable and consequential lectures on the political economy of Nigeria; and addressed some of its most crucial problems, including the imperative of democracy, national economic development, ideology of governance and national census figures.”

Commending the achievements of several alumni of the university over the years, Prof. Osinbajo narrated how US-based Prof Oluyinka Olutoye, an alumnus of the faculty of health sciences gained “global recognition when he led a team of surgeons, to successfully take a 23-week-old baby out of her mother’s womb, removed a tumour and returned it to the mother’s womb where the injuries from her operation healed and she continued to grow until she was born, the second time at 36 weeks.”

He also observed that “not surprisingly, the early leaders in tech and tech-enabled businesses were alumni of OAU’s Department of Electronics and Electrical Engineering; Segun Ogunsanya, CEO of Airtel Africa, and Karl Toriola, CEO of MTN Nigeria. Another Great Ife Alumnus and product of this same department, Prof. Akintayo Akinwande, who teaches at the Massachusetts Institute of Technology, is one of the world’s most respected professors of electrical engineering and computer science.”

Most recently, according to the VP, “another alumnus of the Electronics and Electrical engineering department. Miss Funke Opeke, made global investment news when Equinix, the global conglomerate announced that it was acquiring MainOne, the company she founded, for $320 million.”

Continuing on the feats of OAU Alumni, Prof. Osinbajo recalled that he had “the pleasure of meeting with Professors Adesuyi Ajayi and Femi Babalola, both OAU alumni, when they undertook ground breaking research and clinical trials into the potential use of Ivermectin as a prophylactic and cure for COVID-19.”

The VP added that “it was while still teaching here also that Prof. Wole Soyinka won the Nobel Prize for Literature in 1986. But less well known is the fact that he was also a lecturer at the University of Ife, Ibadan Campus, in the early 1960s.”

According to him, the calibre of honorary graduands at the ceremony was testament to the University’s high standards.

Paying tributes to the faculty of the university, the VP, himself a professor, paused “to celebrate my colleagues in academia, the great scholars, and fine academics who make up the faculties here at the OAU; you are the thought leaders at a historic moment, whose great task is to guide the present and inspire the future.”

His speech also highlighted the strategic objectives of the National Development Plan 2021-2025 as including establishing a strong foundation for a diversified economy, investing in critical infrastructure, power and broadband, enabling human capital development and improving governance and strengthening security.

Incidentally, the VP also noted that “one of the crafters of the Plan, Ambassador Yemi Dipeolu, the Special Adviser to the President on Economic Matters, is also an alumnus of OAU, while his father, Mr. Sesan Dipeolu of blessed memory, was Ife’s first African librarian.”

Prof. Osinbajo said “there is much to show and many stories to tell; stories of the institution itself and many of incredible successes of its alumni; stories of the triumphs of human endeavour, the primacy of ideas, the creative force of the introspective mind and the power of vision.”

In the opinion of the Vice President, “OAU is and continues to be very much a bastion of progressivism and innovation, and not surprisingly you will find the phrase “Aluta against all oppression” in the Great Ife anthem. This progressivism is evident in the outlook of staff and students alike.”

At the end of the Convocation, the Vice Chancellor of the University, Prof. Eyitayo Ogunbodede, conducted the VP and other dignitaries around an arts exhibition to commemorate the event.