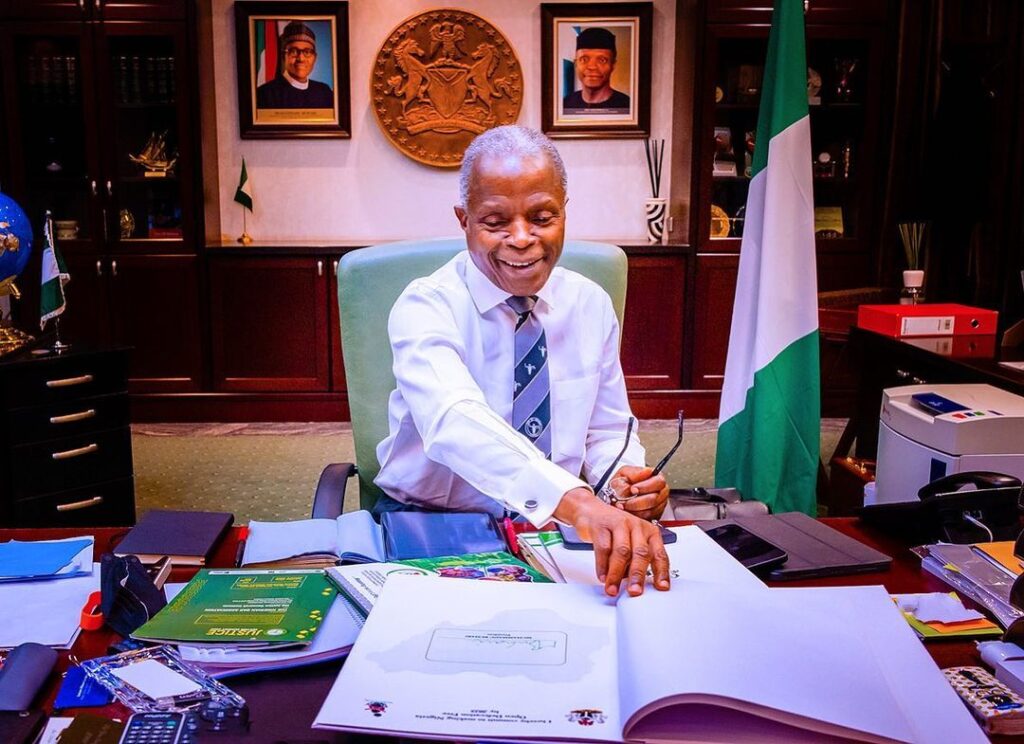 Adds: He didn’t need it in 2007 after being Lagos Attorney General for 8 years

*Says it’s all a bunch of rehashed allegations already debunked

The Northern wing of the Osinbajo Support Movement (OSM) has blasted an unknown group called the Arewa Civil Society Group’s statement regarding the Vice President, Prof Yemi Osinbajo, for baselessly claiming that the VP was seeking immunity against potential prosecution after the 2023 elections, even though he has not declared interest in the electoral race.

The OSM in a statement by its Northern Zonal Coordinators, Hon. Aliko Shaibu (North West), Alhaji Ibraheem Bello (North East) and Dr. Emmanuel Tembe (North Central) noted that Arewa Civil Society Group allegations against the VP are merely a rehash of the same set of bogus lies that have already been discredited and debunked over and again.

“The attention of Osinbajo Support Movement (OSM) has been drawn to the statement credited to one Arewa Civil Society Groups making outrightly false and damaging remarks on the person of Vice President, Prof Yemi Osinbajo.

Without mincing words, it is safe to assert that from the tone of the group’s message, they are misguided and have no regard for truth, facts nor does the group understand the meaning of credibility. A review of the allegations they tabled are the same set of rehashed allegations against the VP that have been presented several times and equally debunked over and again.

A simple check of his activities will reveal the level of the Vice President’s personal intergrity, commitment to the public spirit and a loyalty to the nation, as a  steward of public trust. There is simply no way anyone can possibly describe Prof. Osinbajo as a corrupt man, not to talk of someone hiding from prosecution.

While well-meaning Nigerians certainly understand that this is a shadowy organisation without any following whatsoever, we as a grassroot organisation that reflects the views of the Arewa among credible others can say without hesitation that this unknown band of individuals are by no means the mouthpiece of the Northern Nigerians. They lack the capacity to be and their pretensions are way to exposed such that no one can be fooled.

Having reviewed and researched the composition of the so-called Arewa Civil Society Group, what becomes easily certain is that here is just another fraction of nobodies seeking out the cheap payout from opposition pololiticians.

How are we to compare their warped views on the VP with those of several prominent Northern elites who have made beautiful comments about the Vice President acknowledging his outstanding leadership prowess and patriotism to the country.”

“For the group to have claimed that His Excellency Vice President, Prof Yemi Osinbajo, the VP was seeking immunity against potential prosecution after the 2023 elections, is not only laughable but an outright falsehood. The Arewa group is running for a shadow. Prof Yemi Osinbajo has never been and is not involved in any act of corruption. Despite the mudslinging from critics in the past, the Vic President has come out clean and without blemish. The repetition of such false claim of fraud is another attempt by such devious group to tarnish the VP’s image. However, their selfish motives will not see the light of day, as Osinbajo has proven himself as a man of integrity.

This distinct quality distinguishes him from other politicians who aims for the same office, and we believe it haunts Arewa Civil Society Groups in constant and their paymasters that such a person will be an obvious disturbance to their plans to milk the nation.

Under the supervision of the Office of the Vice President Office, the National Social Investment Programme was regarded as the most successful and impactful social welfare scheme in sub-saharan Africa, and has received global recognition for its social impact. We believe this glowing pedigree of the NSIP under the VP poses a headache to some. The NSIPs has gotten local and global commendation as the only Social Investment Programme in decades that prioritises the common man and reached the depth of the grassroots. It is also established that the success of programme was one of the variables that drove Nigeria out of recession and drew millions out of poverty, according in the recently released independent report from a foreign fact-checking firm.

For instance, independent groups in 2019 commended the N-SIP for its impact on alleviating poverty, providing jobs for unemployed Nigerians and improving small businesses nationwide. In separate reports, the groups – Action Aid, of Africa Network for Environment and Economic Justice (ANEEJ), and the Nigerian Economic Summit Group (NESG) – commended the NSIP for meeting the urgent needs of Nigerians in different areas including providing employment, supporting small businesses and poverty alleviation.

Also, the N-SIPs, under the office of the Vice President, was recorded to have impacted over 12 million direct beneficiaries and over 30 million indirect beneficiaries, comprising family members, employees of beneficiaries, cooks and farmers. The NSIP has been quite effective in cushioning the effects of the recession, while bringing hundreds of thousands of households out of extreme poverty.

In terms of transparency, all financial approvals, payments and spending were appropriated and accounted for throughout the period the NSIP was under the supervision of the Office of the VP. In fact all such financial transactions were conducted outside the Presidency by the Ministry of Budget & National Planning. Prof Yemi Osinbajo charted the policy directions of the programme, winning laurels and awards both in the country or abroad.

The Vice President stands tall and can raise his heads high and quite frankly, this is why many Nigerians are rooting for him as President.”

“This is to serve a note of warning to the group and others that painting innocent individuals with tar in the public is not a license to electoral victory for their candidate. Political campaigns, engagements and pursuits should be issues-based, not woven with lies, innuendos, subterfuge and character assassination.

Finally Prof. Osinbajo served for 8 years as Attorney General of Lagos between 1999 and 2007, he didn’t need immunity afterwards. Before then his first political appointment was as Special Adviser (between 1988 and 1992) to Chief Bola Ajibola, SAN as Attorney General of the Federation. He never needed immunity then. So what is this foolishness that this pay-for-hire merchants of lies are forming?

We exist to secure the future of our nations, and therefore, the OSM will not allow lies to prevail over the truth and facts.

Already some media outlets have seen through the foolishness of the claim and have deleted the story. We ask Nigerians to also ignore this rented crowd!