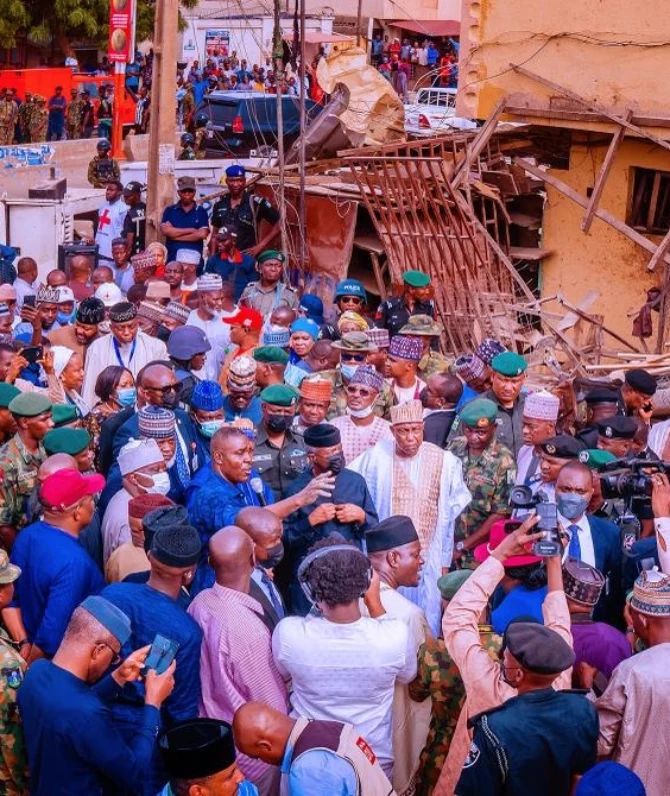 *VP to delegates: I’m well prepared for the job, choose the right leadership

Nigeria has all it takes to become a truly great nation more than it is now, and efforts must be made to choose the best leadership for the country in the 2023 elections, according to Vice President Yemi Osinbajo, SAN.

Prof. Osinbajo stated this yesterday during his meeting with stakeholders and delegates of the All Progressives Congress (APC) in Kano State, continuing his nationwide consultations.

Earlier Tuesday morning in Abuja, the Vice President was formally presented with the award for Leadership Person of the Year 2021 at this year’s Leadership Newspapers’ Annual Conference and Awards ceremony.

Before he proceeded to the venue of his interaction with the APC delegates and stakeholders in Kano, the Vice President stopped by the scene of Tuesday morning’s explosion in Sabon Gari area of the State, to commiserate with the families of victims and people of the State.

During his interactions with APC stakeholders, the VP observed that the delegates can make the difference in setting the country on the right course for 2023 while emphasizing his capacity and readiness to make a difference as president if elected.

“Nigeria can be really truly greater than this. We have everything to be great. Anything that you want in this country, you can get it. But we must make the efforts ourselves to choose the right leadership. All I can say to you is that your role as delegates, is important, especially in the coming primaries and elections

“All the experience that God has given me, having served as Vice President for seven years, is so that when the opportunity arises, I will use it for the service of this country. I am very well prepared for the job. And you are the people that are going to make that difference. You and I working together can make a difference in this country.”

Noting that Nigeria has the potential to be among the greatest countries in the world, the VP said, “If God helps me and I become president, we will change this country for good.”

Speaking at the explosion scene earlier, Prof. Osinbajo condoled with the governor and people of Kano over what he described as a very sad and unfortunate development.

Commiserating with the families of victims and the injured, the VP said, “we are here just to say how deeply regrettable this incident is, and to pray that the Lord God Almighty will comfort the families of all of those who have lost their lives.  And to say that the peace and security of all individuals and all residents in our States are the responsibility of all.  We pray that this sort of terrible incident will not repeat itself.”

Prof. Osinbajo received a warm welcome to the State on arrival by the State Governor, Umar Ganduje, and other State government officials, as well as an exuberant reception from residents on his way to the venue and at the venue of the delegates’ meeting.

The VP’s convoy was heralded on the streets of Kano, amid singing, dancing and supporters hailing the Buhari administration and the VP. Residents waved and supporters lifted their banners, everyone in a joyful mood as the VP acknowledged cheers every step of the way and at every stop with an impressive turnout everywhere.

Welcoming the VP to the State, Governor Ganduje described him as a “committed second in command” and loyal deputy to President Muhammadu Buhari.

“Having been a deputy governor for 8 years and now governor for seven years, I know it all, what it takes to be a deputy. I congratulate you for being a successful deputy of the President of the Federal Republic of Nigeria,” said the Governor.

Advocating for zoning, the Kano State Governor added that Nigeria’s next president in 2023 should come from the Southern part of the country. “We believe in that and respect that and we shall vote for that.”

*“Your Excellency, thank you for coming to Kano, which I can say is your home, because you have visited here several times,” the Governor said.

Similarly, the Majority Leader in the House of Representatives, Hon. Alhassan Ado Doguwa, added that the vice president is renowned for his commitment, dedication, and for patriotism.

“Above all, we have known Osinbajo for loyalty. He is a loyal deputy to our own father, the President of the Federal Republic of Nigeria. It is, therefore, my wish that Allah will continue to guide you, protect you, and keep the APC united,” Doguwa stated.