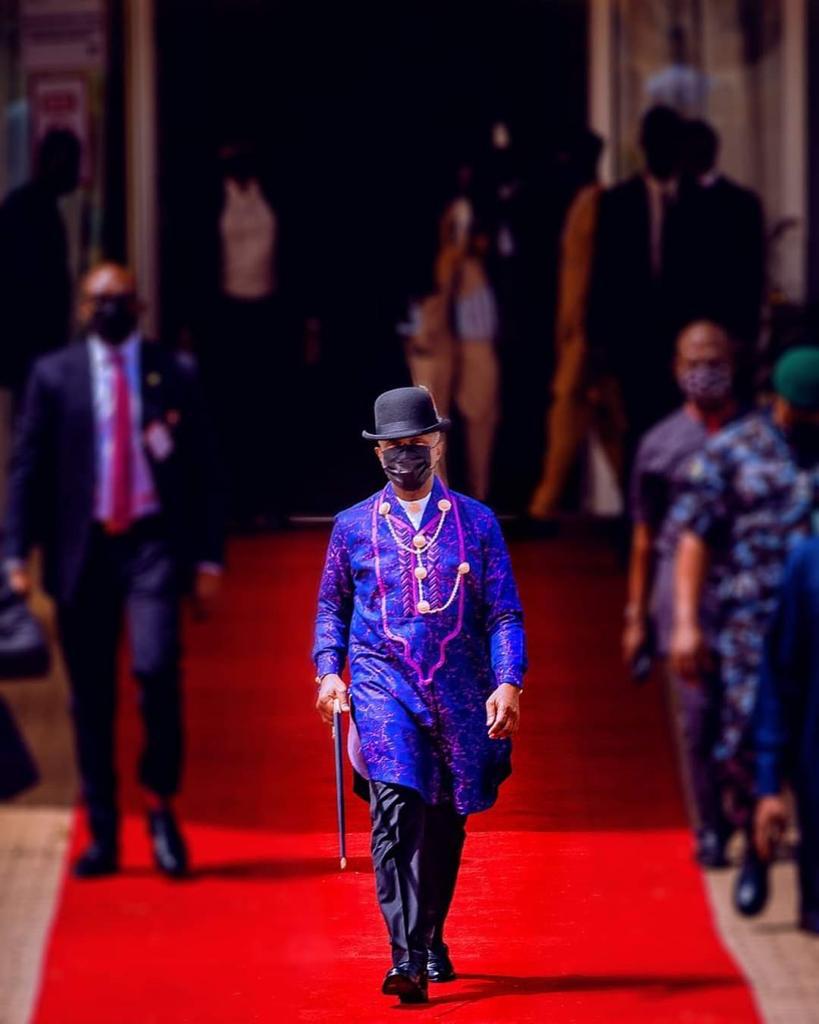 *”We want every person, in every corner of the country, to get a fair chance”- VP says as he flags off Oporoma Bridge in Angiama, Bayelsa State

One of the key objectives of the Buhari administration is ensuring inclusive prosperity, which is why the Federal Government is collaborating with State governments and increasing efforts towards ensuring the wholesome development of communities in the Niger Delta region, and across the country.

This was stated by Vice President Yemi Osinbajo, SAN, on Saturday in Bayelsa State at the construction flag-off of the Angiama-Oporoma Bridge, on the Yenagoa-Oporoma-Ukubie road.

During his visit to the State, where he was received at the airport by the State Governor, Senator Douye Diri, the VP also paid a courtesy call on the Traditional Rulers Council in the State, ahead of the flag-off and the drive-through on the Yenagoa-Oporoma-Ukubie road.

Speaking at the flag-off where the Vice President remotely pressed the buttons that spurred the construction, he observed that for a country with the population and geographical span of Nigeria, guaranteeing inclusive prosperity is a mandate for Government.

He added that this is especially so with “the rapid urbanization of the last two decades, the consequent pressure on cities, and the difficulties of allocating scarce resources, faced by governments at all levels, and across the country.”

Highlighting the importance of such infrastructure projects to a nation’s development, the VP said, “we must always find the commitment, innovation, and persistence to put in place the quality and scale of infrastructure needed, to give our people the productive and competitive edge to better their lives, and we need to do it as fast as possible.”

According to the Vice President, Niger Delta Communities such as Oporoma, Angiama – where the Bridge is now being constructed, and others across the region, are home to vast amounts of mineral wealth and natural resources, so they deserve to have considerable developmental gains to show for it.

The VP noted that the Angiama-Oporoma Bridge construction is a symbol for development in the region, and will have a far-reaching impact on the lives of the people in the communities.

“By facilitating easier access to places like Yenogoa and beyond with this bridge, we will be laying a foundation for development that will deepen commerce and create individual and collective opportunities for the people of these communities,” he stated.

Prof. Osinbajo further said that the President Buhari administration is committed to the wholesome development of the Niger Delta region, through its Niger Delta New Vision initiative.

“As a matter of urgency, we are well on our way towards correcting historical lapses in this respect, through the collaborative efforts of the federal, state, and local governments, each one putting aside personal interests, and doing the best they can for the communities which have undeservedly suffered for so long,” he emphasized.

The VP also assured the people of the “Federal Government’s full support and collaboration in every way possible. “You have not been forgotten, and this milestone is only the beginning of greater things to come,” he said.

Under the Buhari administration’s New Vision initiative, the region has witnessed significant development strides and projects, such as the ongoing Ogoni cleanup in Rivers State; the take-off of the Nigeria Maritime University; establishment of modular refineries across states in the region; infrastructure projects, including the 34-km Bonny-Bodo Road and Bridge project, the Warri-Itakpe railway line, among others.

Speaking about the importance of the Angiama-Oporoma Bridge and Yenagoa-Oporoma-Ukubie road to development across the state, Prof. Osinbajo observed that “there can be no inclusive prosperity without the effective linkages of communities and the effective facilitation of trade that roads like this provide.”

On how to ensure inclusive prosperity, the Vice President disclosed that, “Our ability to create an environment that allows each and every person, in each and every corner of the country, to get a fair chance at maximizing their potential, is one of the surest routes to sustainable economic development.”

He noted that the flag-off and completion of the project will unlock much commercial activities in Oporoma and neighbouring communities.

“The farmers and fishermen that will be connected to new markets as easier and more efficient logistics enable them expand their operations, employ more people, and provide better opportunities for their families; not to mention the improvement of security through an access road that circumvents sea pirates, and allows traders go about their businesses safely,” the VP observed.

He further pointed out that “no local economy in the world can survive by being isolated, as cities and towns thrive partly because they develop and sustain infrastructure that allows for profitable and free economic, social, and cultural exchanges.”

Noting the State’s potential, Prof. Osinbajo observed that “the challenge, historically, has been in getting the obvious potential of the State to match up to its lived realities”

While he expressed hope in the quality and timely completion of the construction, the VP commended Governor Diri for his doggedness in embarking on development projects.

“The breadth of the projects you have embarked upon and the thoroughness of their execution speak clearly to your unfolding vision and gives confidence that, in the near future, we will see a State gradually elevated to world-class status,” he said.

The Vice President also encouraged the people of the community to take ownership of the project, “and to work with the government to ensure that it is completed and maintained without hinderance or sabotage.”

According to him, “there are dreams on this side of the proposed bridge as it is flagged off today – dreams that it will be speedily completed, and that our people will thus be connected to all the possibilities needed to realise their full potential.”

Similarly, in his remarks during the courtesy call by the VP to the traditional rulers, the Vice Chairman of the State’s Traditional Rulers Council, the Obenibe of Epie Kingdom, HRM King Malla Sasime, thanked the VP for the visit, and said the VP’s name has been mentioned for many good reasons.

“If you come out for president (candidate), you will be a good material… we appreciate what you are doing, and we thank you for being a good vice president. We hope that you keep your relationship with Bayelsa in very good stead,” King Sasime, who spoke on behalf of the Council said.