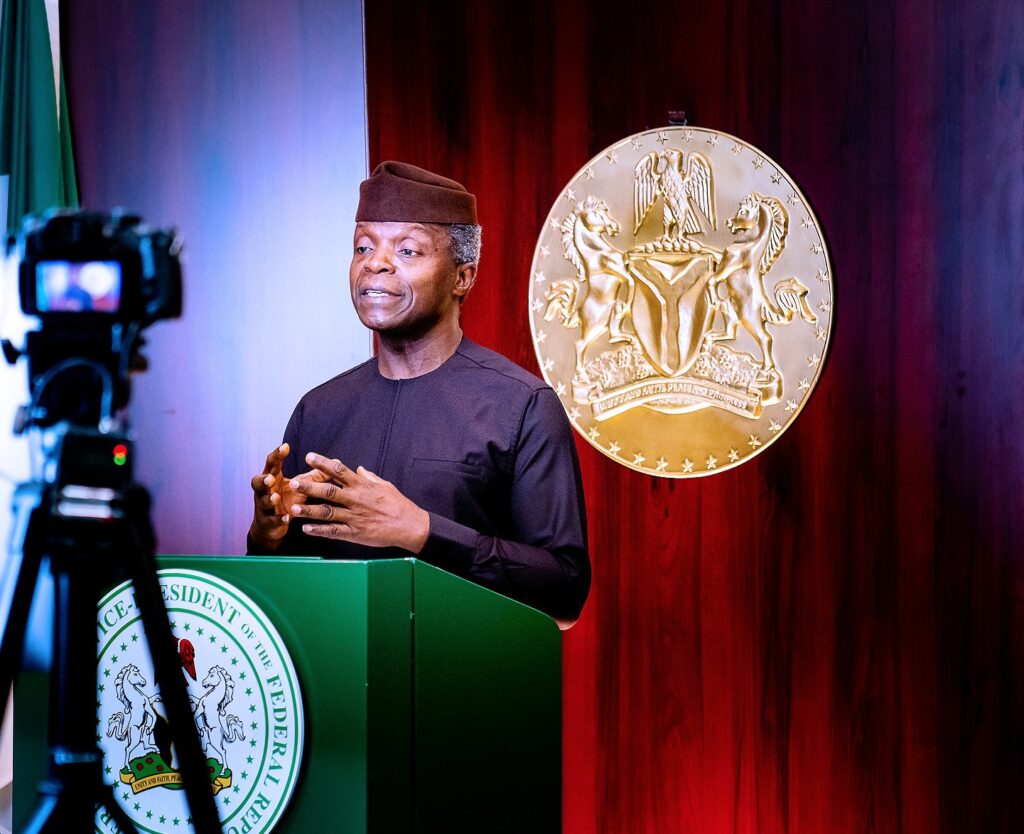 REMARKS BY HIS EXCELLENCY, PROF. YEMI OSINBAJO SAN, GCON, VICE PRESIDENT OF THE FEDERAL REPUBLIC OF NIGERIA AND CHAIRMAN, NATIONAL COUNCIL ON PRIVATISATION, AT THE NCP RETREAT ON THE AMENDMENT OF THE PUBLIC ENTERPRISES (PRIVATISATION & COMMERCIALISATION) ACT 1999, HELD AT TRANSCORP HILTON HOTEL ON 18TH MARCH, 2021

It’s a great pleasure to join the Director-General in welcoming you all to this Retreat of the National Council on Privatization for a comprehensive review of the proposed amendments to the Public Enterprises (Privatization & Commercialization) Act 1999.

I doubt whether there is anyone left who needs to be convinced that the only way to effectively address the massive infrastructural deficit our country faces is by PPP arrangements in one form or the other.

According to the Nigerian Integrated Infrastructure Masterplan (NIIMP) and Economic Recovery & Growth Plan (ERGP:2017-2020), Nigeria will require at least $2.3trillion over the next 30 years to bridge this yawning gap.

A review of the budgetary allocations for capital expenditure even over the past decade, clearly shows that Government’s resources are insufficient for this purpose. While the government can take either commercial or concessionary loans for infrastructure development, this is an additional burden for a usually considerably leveraged balance sheet.

But there is a large pool of investable funds from both local and international investors for the development and maintenance of infrastructure. But these are only accessible where there is a business case to be made for developing public infrastructure.

For both institutional and individual investors there is far more comfort with lending or with equity participation where a private sector entity partners with the public authority owner of the infrastructure. This way, the public partner can play its natural role of regulator (regulation and policy), while business is left to the private sector party whose reason being is business. So for the investor, PPPs present the best of both worlds.

However, we have not been able to fully unlock the potentially huge benefits that are afforded by PPPs, due to the absence of a comprehensive PPP framework, setting out institutional responsibilities which would provide investors with the necessary comfort to commit capital towards infrastructure development.

This has now been addressed by a policy pronouncement in the form of Circular Number SGF .50/S.37/II/749) dated 14th September, 2020. The Circular provides the much-needed clarity on institutional roles played by agencies of the Federal Government for PPP purposes.

In the light of that Circular, the Federal Government has directed that the Bureau shall be responsible for the concession of public enterprises and infrastructure already listed in the First and Second Schedules of the Public Enterprises (Privatization and Commercialization) Act. The Bureau is also to act on behalf of Government as the counterparty on all infrastructure projects being developed on a PPP basis.

Consequently, the Bureau reviewed the provisions of the Public Enterprises (Privatization and Commercialization) Act and has proposed amendments to exhaustively articulate the functions and powers of the National Council on Privatization and its Secretariat which is the Bureau, in order to implement this additional PPP mandate.

Distinguished participants, in view of the overarching objective to leverage on the potentially huge benefits of PPP arrangements to attract private sector capital for investment in infrastructural development in Nigeria, this Retreat is designed to achieve the following purposes amongst others:

(i)     Enable members of Council to understand and appreciate the need for the proposed amendments to the Public Enterprises (Privatization & Commercialization) Act;

(ii)    Provide members with an opportunity to develop an appropriate strategy for stakeholder engagement and support facilitation of the amendment of the Act and the implementation of the Federal Government’s PPP mandate.

I am positive that this forum will benefit considerably from your vast knowledge and experience. I’d like to urge you all to participate fully in the discussions.

It is now my special pleasure to formally declare this Retreat open.

Thank you very much.