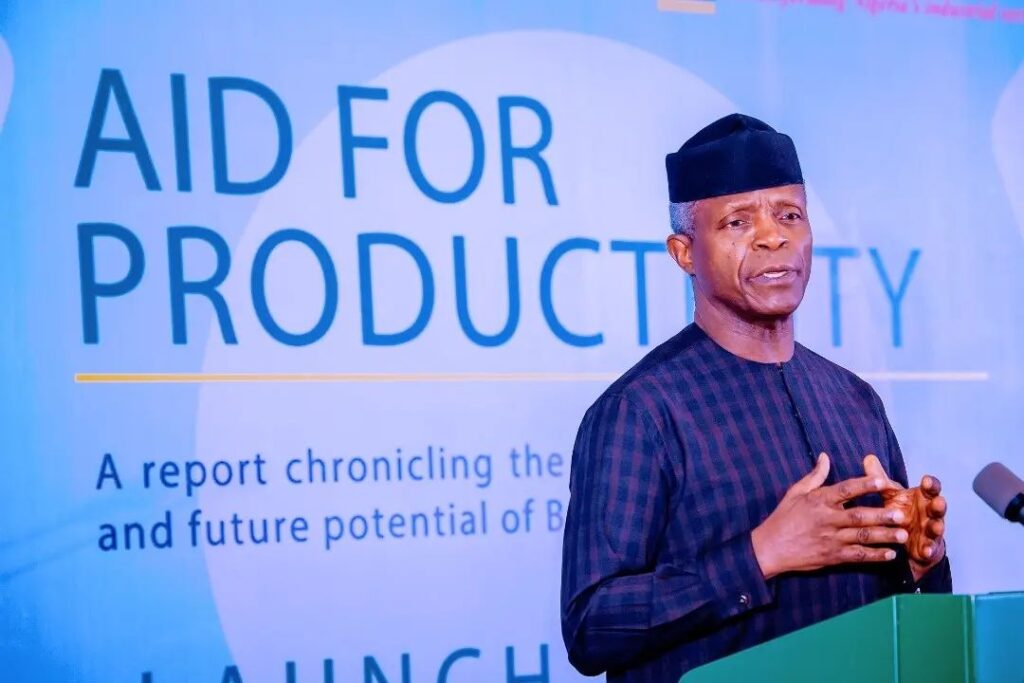 Beyond providing interest-free microcredit loans to petty traders, the various social intervention schemes of the Buhari administration have made significant impact in the lives of millions of ordinary Nigerians.

In furtherance of its determination to boost economic growth, the Administration has also ramped up its support for Micro, Small and Medium Enterprises (MSMEs) sector, which accounts for close to 50% of Nigeria’s GDP and 76% of the country’s labour force.

This was the summation of Vice President Yemi Osinbajo, SAN, in his keynote address on Monday at the Bank of Industry (BOI) Aid for Productivity report launch, which chronicled the development, impact, and future of the BOI’s Growth Platform, which is the human and technology infrastructure used to drive multiple large-scale intervention programmes for micro, small and medium enterprises.

More importantly, the VP noted, was the fact that the success of the BOI Growth Platform was the story of “the Nigerian can-do spirit and the entrepreneurial DNA we carry.”

“This is a shining case study of what President Muhammadu Buhari strongly believes: that Nigerians will solve Nigeria’s problems. This is an example of what we can achieve when we unleash the best of our people – especially our young – on the toughest of our challenges, and give them the free-hand to deliver results,” he added.

As the VP stated, “this demographic was far too important to ignore. We had to start solving for them, especially having been left far behind historically,” a reason he noted led to the implementation of intervention schemes through the BOI’s Growth Platform for MSMEs.

“What might also not be obvious is the sheer scale of impact that has been achieved with these programmes, as over four million Micro, Small and Medium Enterprises have been direct beneficiaries of the over N150billion deployed in the past five years,” the VP said.

He added that, “57% of these MSMEs are owned by Nigerians below 35 years of age, and close to 60% of the beneficiaries are women. What is even less glaring is that the team of Nigerian professionals behind this work is largely young, with an average age of 28 years old.”

Highlighting the transparency and impact of these microcredit schemes, particularly the Government Enterprise and Empowerment Programme (GEEP loans – MarketMoni, FarmerMoni and TraderMoni) under the SIPs, Prof. Osinbajo recalled his interaction in 2018 with a petty trader, Jafar Abubakar, one of the Tradermoni beneficiaries at Abubakar Gumi Market in Kaduna when he visited to launch the scheme in the State.

He narrated: “Jafar Abubakar, who trades in ginger and garlic was one of 5,000 or so traders who had just received ₦10,000 to advance his business in that market. What struck me was what he said about how he was selected to get the credit.

“He said ‘i just applied. I didn’t know anybody. They came here and captured my data last week and I got the alert yesterday.’”

The VP added that Jafar then “showed me the alert on his phone. Stories like Jafar’s have become all too familiar to me over these years. It is a consistent tune I hear as I engage thousands of beneficiaries of our intervention programmes.”

Indeed, the TraderMoni scheme, which provides N10,000 interest-free & collateral free loans to petty traders, mostly with an inventory of less than N5,000, had made huge positive impact nationwide. This includes enhancing the small businesses of beneficiaries, improving their families and contributing to the informal economy.

“This is perhaps for me one of the most satisfying things about the way our social intervention schemes are deployed. That there is a platform that can process applications from potential beneficiaries, pay out credits or other benefits, maintain auditable records seamlessly. It is those people and infrastructure that make this happen that we are celebrating today,” Prof. Osinbajo noted.

The VP further highlighted the nationwide impact of the Administration’s Social Investment Programmes, which he noted was the “most ambitious social intervention project in Nigeria’s recent history, with a series of people-centric programmes.”

“This is a journey that only began as an idea 6 years ago: that we can build systems that will serve everybody fairly and justly and bring credibility to government programmes. One of the biggest barriers we identified was the ability to reach people directly, capture and digitize their information (even if they are illiterate) and process a benefit to them directly in a way that is transparent to all. Our vision set out to solve this.”

“For some programmes, the everyday Nigerians were young graduates who would benefit from a direct stipend and employment placement from the government. For others, it would be pupils for whom a reliable meal per day would make the difference between staying enrolled in school or skipping school to earn money for that meal.”

Prof. Osinbajo also praised the infrastructure and transparency behind the BOI Growth Platform schemes. For instance, he recalled his visit to the Growth Platform’s Command Centre, which now has “22,000 agents, living across all LGAs in Nigeria and equipped with its proprietary mobile technologies, receive mandates to capture and digitize businesses eligible for its growing suite of programmes.”

He observed that “every detail of each business is trackable centrally at the Bank of Industry, down to biodata, geolocation, images and facial IDs of every micro, small and medium entrepreneur where applicable.”

“This has greatly simplified the profiling and decision-making processes that have allowed for direct outreach and impact on Nigerian MSMEs at tremendous scale. And this is being done with entirely home-grown solutions and an ecosystem of institutions, donor partners, service providers and technology companies in Nigeria.”

The Vice President also commended the Managing Director of the Bank of Industry, Mr. Olukayode Pitan; as well as the BOI Growth Platform team led by its Executive Director, BOI, Toyin Adeniji; with Uzoma Nwagba as its Chief Operating Officer.

According to the VP, “they have brought to bear the best of experience and bold thinking, the depths of innovation and youth, and a detailed understanding of the Nigerian spirit, to build an operation and impact that have become a national pride. The over four million micro, small and medium enterprises impacted till date, and the several more to come, are a direct testament to their hard work.”

Adeniji and Nwagba are the co-authors of the “Aid for Productivity” report, which they formally presented at the launch.

The VP also applauded pioneering partners, particularly the Bill and Melinda Gates Foundation for providing the much-needed early support to the Bank of Industry to build this operation to the large scale it is now.

In his remarks, the BOI Managing Director, Mr. Olukayode Pitan, restated the impact of its programmes, noting how programmes such as GEEP have won several local and international awards, including the award at the 2019 African Bankers’ Awards as the most impactful Financial Inclusion program in Africa

Prof. Osinbajo also commended the commitment of Nigerian financial institutions, technology companies, service providers and programme partners who he said “have given the best of their expertise to this work over the years.”