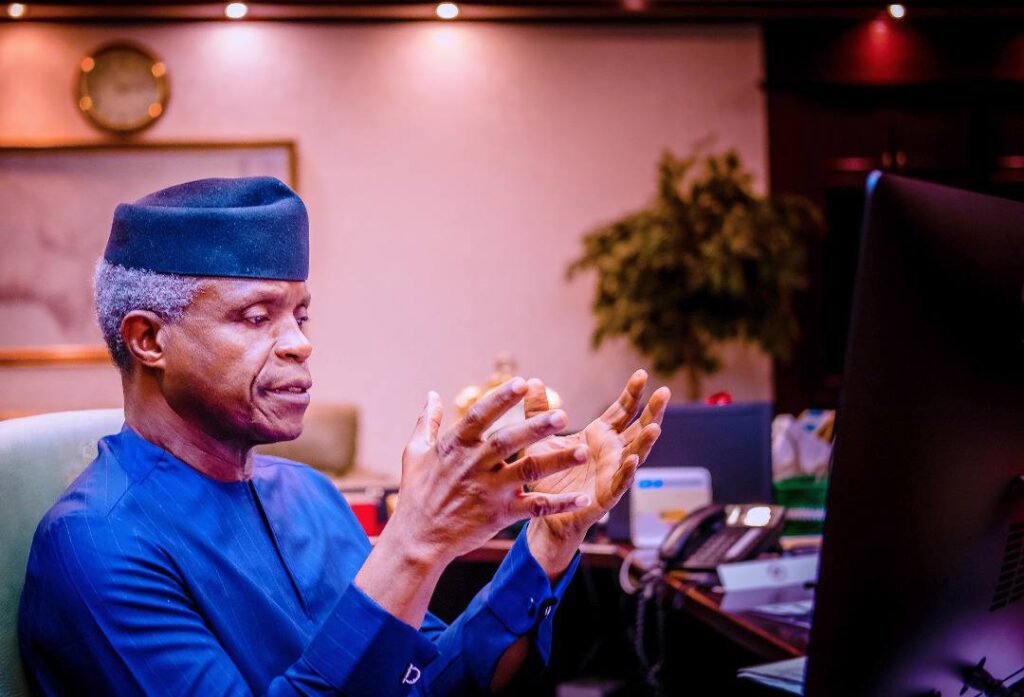 *Presides over meeting of National Poverty Reduction with Growth Strategy

As the Health Sector Reform Committee set up by President Muhammadu Buhari is inaugurated, the members have been urged to brace up for the task ahead, as Vice President Yemi Osinbajo, SAN, re-echoed the President, that a modern, and people-oriented healthcare is fundamental to his own vision for the country’s growth and development.

Prof. Osinbajo stated this today in his address at the inauguration of the Health Sector Reform Committee, which he leads. Membership of the Committee is drawn from the different arms of government, development partners, the traditional institution and Civil Society Organizations, among others.

Emphasizing the importance of the committee’s task while recalling President Buhari’s vision, the Vice President, at the virtual event said, “Mr. President, has in several public statements made it clear that a modern, virile and people-centric healthcare system was fundamental to his own vision for socio-economic growth.”

However, the VP observed that the current reality is that the Nigerian health sector still carries some critical challenges, which has resulted in sub-optimal outcomes, when compared with more developed jurisdictions of the world, a situation that makes the reform of the sector imperative.

Acknowledging challenges in the health sector, Prof. Osinbajo explained that government has the primary responsibility to address the issues “and to put in place the structures and arrangements necessary to boost the efficiency of the healthcare ecosystem, improve healthcare delivery, stem the brain-drain of our health personnel and reduce the pressure on our foreign reserves on account of medical tourism.”

Speaking further, Prof. Osinbajo said a lot of efforts have been made prior to the setting up of the committee to ensure that the reform process is hitch-free.

According to him, “there have, of course, been a good number of attempts to reform the healthcare system in Nigeria and many of us who are members-designate of this committee are familiar with some of these reform efforts, but this particular journey of reforming the Nigerian health sector (and we have heard, I think quite comprehensively from the Hon Minister of Health) began with the commissioning of a Diagnostic Needs Assessment (DNA) of the Sector.

“Subsequently, the National Council on Privatisation at its meeting of April 12, 2019, approved the appointment of consultants to carry out the assignment, which involved a review of previous reform efforts in the sector, as well as field visits to the 55 Tertiary Health Institutions across the country and some selected sub-regional health institutions.”

While soliciting the cooperation and dedication of all members of the committee, the Vice President noted that “on account of the multi-sectoral and multi-disciplinary participation that is required to execute a health reform mandate on the scale and the complexity that we have today, I am keen to ensure that the coordinating office for the reform effort which will be domiciled in the Office of the Vice President will not just have the Ministry of Health (which is an important partner) but also some of the important technical resource persons provided by our partners and of course solid representation also from the committee.”

He said: “the Coordinating Office will provide technical and administrative oversight of all activities of the reform, and I intend to have further consultation with the Minister of Health as we bring this to fruition. The next steps are that this committee will be divided into thematic working groups to take on various aspects of the assignment.”

Equally, the Bill and Melinda Gates Foundation will partner with the Committee in the discharge of its functions.

Meanwhile in another development, ahead of the commencement of the implementation of programmes under the National Poverty Reduction with Growth Strategy (NPRGS), Prof. Osinbajo on Thursday presided over the third meeting (virtual) of the National Steering Committee of the programme.

The meeting reviewed the activities of the Steering Committee following a presentation by the Nasarawa State Governor, Abdullahi Sule on the composition and working of the Technical Working Group as regards the implementation of programmes under the scheme.