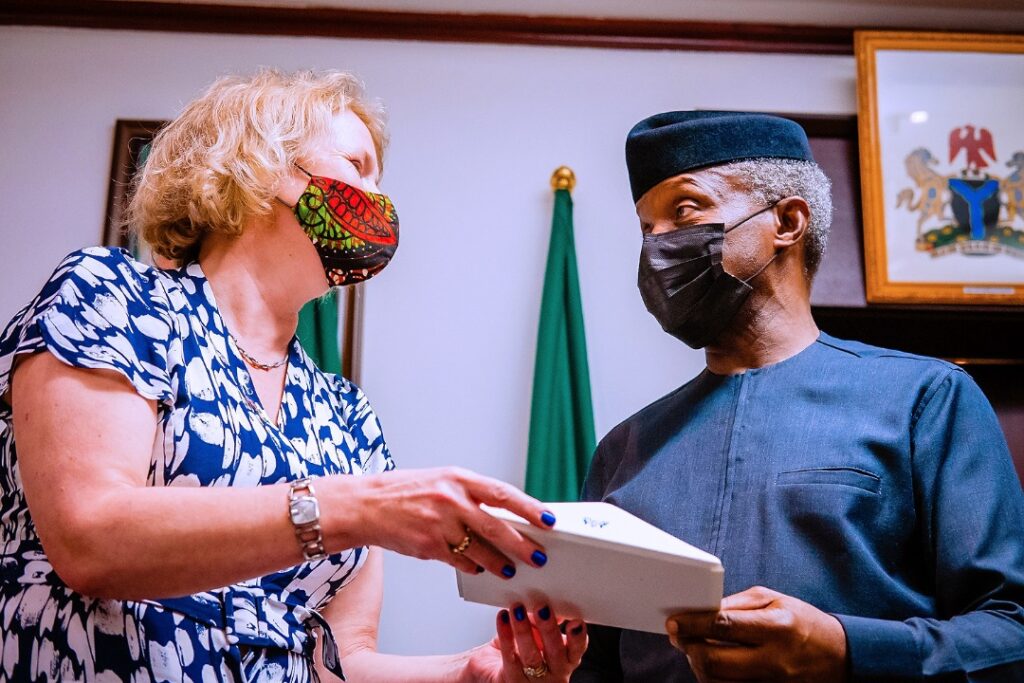 Following the tough stance by leaders of the Economic Community of West African States (ECOWAS) against recent coups d’etat in the sub-region, the cooperation of the international community including other global, regional bodies and financial institutions will concretize the efforts against unconstitutional changes of government and deter coup plotters.

Vice President Yemi Osinbajo, SAN, stated this late Monday when he received on a courtesy visit to the Presidential Villa, the United Kingdom’s Minister for Africa, Vicky Ford, MP who was accompanied by British High Commissioner to Nigeria, Catriona Laing.

According to the Vice President, “there is a lot of attention being paid to coups d’etat going on, especially in the West African sub-region, I think it is important that we take a closer look at how to prevent and deter coups detat and adventurers of various kinds who want to take over governments by force.

“One of the critical things which have been discussed at various ECOWAS meetings is how to cooperate with the rest of the world, bodies such as the UN, EU and some of the Development Finance Institutions to give our sanctions more teeth.”

“So, we think that if there is some cooperation at the multilateral level, we might be able to deter some of these coups. I think that it is an issue that we should engage even more on because it is troubling that one after the other, countries are experiencing coups detat,” the VP added.

Speaking on the government’s efforts in the area of energy transition and economic development, the Vice President restated Nigeria’s commitment to the post COP26 agenda while calling on the wealthier countries in the international community to fulfil their obligation, especially in funding gas as a transition fuel.

He commended the United Kingdom’s acknowledgement of Nigeria’s Economic Sustainability Plan, among other efforts to ensure growth in the economy and foster prosperity among the people.

Earlier in her remarks, the UK Minister for Africa, Ford, recalled the cordial relationship that exists between Nigeria and the UK, noting the need for improved collaboration in the areas of trade and investment, and green energy, among others.

She commended the excellent job done by the Buhari Administration with the Economic Sustainability Plan which has ensured a positive growth trajectory of the economy.

In another development, the Vice President also received at the Presidential Villa, a delegation from the Church of Jesus Christ of Latter-Day Saints, led by its global leader, Elder Todd Christofferson who is based in the United States of America.

At the meeting, while welcoming the delegation of the global Christian denomination, Prof. Osinbajo urged faith-based organisations to speak more for the unity of the country and peaceful coexistence among Nigerians.

“I appreciate the social service works that the church (i.e the Church of Jesus Christ of Latter-Day Saints) is doing in the area of clean water, immunization, and several other things. For faith-based organisations, it is an article of faith that you must contribute to the development of society.

“We need to also speak a bit more about the unity of men and women across the country regardless of their faith and ethnicity. We are at a time in our country where this message is very important. The message of unity, the message of saying that nations are built around people who believe in God and those who do not.”

On his part, Elder Christofferson who was accompanied by church leaders and their spouses from within and outside Nigeria commended the efforts of the Vice President in fostering unity and peaceful coexistence among Nigerians and noted that the church in Nigeria would, in the coming years, work to contribute to the growth and development aside preaching unity among citizens.

The VP also presided over a board meeting of the Border Communities Development Agency, BCDA, virtually earlier in the morning yesterday.