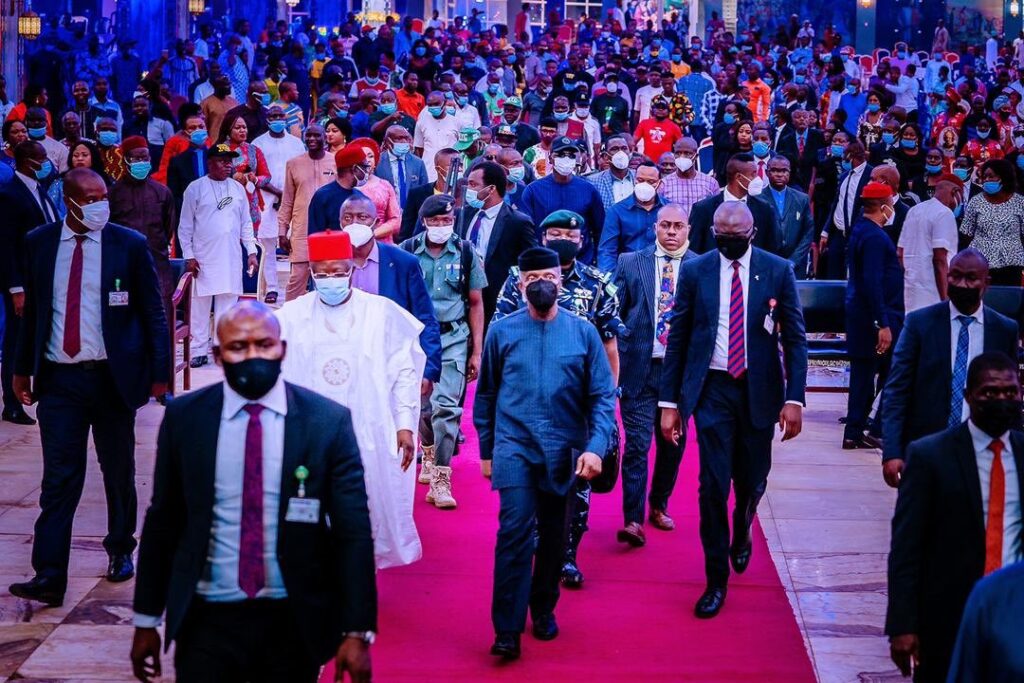 OSINBAJO IS ABOVE CHRISTIANIZATION OR ANY SECTIONAL AGENDA FOR THAT MATTER*

*This VP, the world knows is a man of honour

By now Nigerians are settled in their minds what kind of man Yemi Osinbajo is. Most people of goodwill have no problems figuring out his public spirit, integrity, passion for people, humility, hardwork and competence.

Yet there are those desperate to deliver stains on Yemi’s glowing white garments. Because they are not successful each time they tried, they have resorted to rehashing same old stories no matter how fake and regardless of the obvious truth that debunks the fake narratives.

As it is with WhatsApp, I stumbled upon an article with the title “Osinbajo’s Stealth Christianization Agenda” by a faceless Dr Musbau Akinbode, who says he is from Surulere. The article makes for good reading if you have some time to spare reading gossips, but for those who understand and follow the activities and appointments by Vice President Yemi Osinbajo, it is most laughable.

The so-called Dr M. A. as he called himself the first time, sought to drive a wedge between the Muslims from Southwest of Nigeria and the Vice President by pushing an emotional set of lies, many of which bordered around his time in the Presidency since 2015.

The article claimed that Osinbajo has appointed more Christians particularly from the Redeeemed Christian Church of God but could only manage to come up with 6 names, 5 of whom the Vice President did not appoint.
They are
*DG, Budget Office (Ben Akabueze);
*DG, BPE (Alex Okoh) and
*Minister of Trade & Investment (2015 – 2019) Okey Enelamah,
*MD, Bank of Industry (Kayode Pitan) and
*Ben Ovwiosu and Akin Akinwale, (both Executive Commissioners, PENCOM).

The only appointment the Vice President made was that of Kayode Pitan who replaced Mr. Waheed Olagunju, then acting managing director of the Bank of Industry, claiming that Osinbajo has never appointed a Yoruba Muslim. This is just a FAT lie.

The writer claimed that Osinbajo has been trying to Christianise Nigeria just like many have accused his boss, President Muhammadu Buhari, of trying to Islamise Nigeria and of course, the writer stated categorically that Osinbajo will not be President in 2023, which I think was the reason for the misinformation and disinformation in the first place.

Let’s separate the facts from fiction. The highest ranking member of Prof Osinbajo’s team is Ade Abdulrahman Ipaye and he is a Muslim from Lagos in the Southwest. Mr Ipaye is the Deputy Chief of Staff and he sits in almost all of the VP’s meetings.

The positions following the Deputy Chief of Staff’s in the order of hierarchy, are the Special Advisers in the Office of the Vice President.
The VP has 5 Special Advisers and 3 are Muslims;
*Senator Babafemi Ojudu from Ekiti State  *Barrister Mariam Uwais from Kano State, and wife of a former Chief Justice.
*Engr Ahmad Rufai Zakari fron Jigawa State

The Senior Special Assistant on Legal Matters, in the VP’s Office Dr. Balkisu Saidu is also a Muslim, as a matter of fact, she was once quoted on BBC Hausa as saying that, “If you look at the remaining senior positions in that office, most of them are in the hands of Muslims from the North.

“For instance, the person in charge of Protocol (i.e. the Director of Protocol) and also Senior Special Assistant on Foreign Affairs is Ambassador Abdullahi Gwary from Yobe State; those in charge of welfare and health in the Office of the Vice President are mostly Muslims and from the North.

“Worthy of note are the stewards, those who serve the Vice President’s meals, they are mostly Muslims, so what do the critics mean when they talk about religion?” she quizzed.

What about other engagements with Yoruba Muslims and Muslims across the world? Last year, on October 1, Prof. Osinbajo graced the NASFAT Youth Virtual Independence Seminar. Of course there are many more engagements similar to this.

He has also been invited by Nigerian Supreme Council for Islamic Affairs (NSCIA), the highest Muslim Council in Nigeria, to speak on a number of occasions.

He was present at the interactive session with Muslim Professionals from across the six states of the southwest in 2019. It is also important to note that his engagements with Muslims are not only local but international. One event that comes to mind is the Sixth Assembly of the Forum for Promoting Peace in Muslim Societies in Abu Dhabi, UAE where he was invited to speak.

Also, after that event at the Presidential Palace in Abu Dhabi, he met with Sheik Mohammed Al Nayan, the Crown Prince of the Emirate of Abu Dhabi and Deputy Supreme Commander of the UAE Armed Forces.

Certainly, Dr M. A. who now says he is Musbau is a lone voice in this propaganda against the Vice President of Nigeria, who has acted in good faith to all religions and ethnic groups.

He certainly does not represent the Yoruba/Southwest Muslims or any Muslim in this country in anyway. It is clear that his article is a calculated attempt to smear the VP ahead of the 2023 Presidential election, perceiving him a threat.

If he must attack a man of goodwill he and his paymasters must do so only on the basis of truth. If not let them keep silent and stop exposing themselves!