IN ZAMFARA, KATSINA, EMIRS TELL OSINBAJO “WE ARE BEHIND YOU,” DESCRIBE HIM AS A BRIDGE BUILDER & NEEDED, EXPERIENCED LEADER 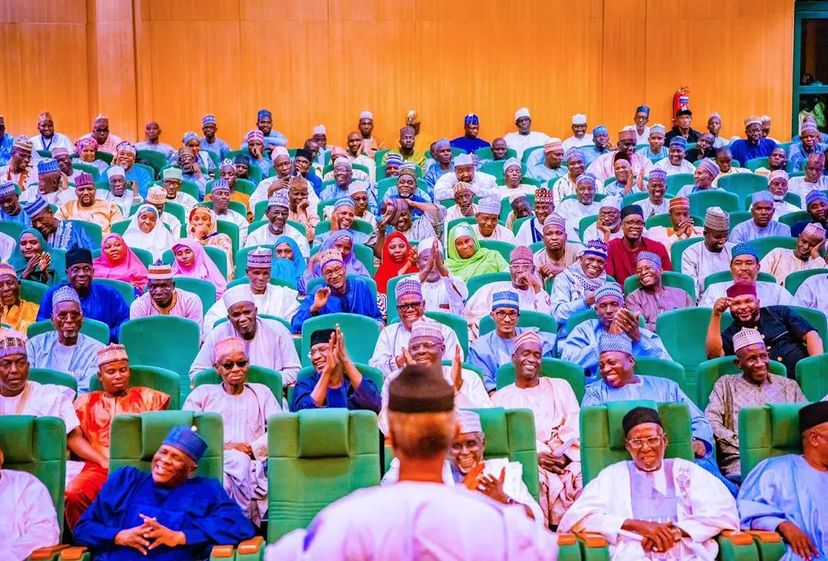 *VP says together, a united Nigeria will attain true greatness

Vice President Yemi Osinbajo, SAN, garnered in huge commendations and endorsements yesterday both on the streets and from governors, traditional rulers and APC stakeholders while visiting Zamfara and Katsina States as he proceeds on his interactions with APC delegates across the country.

Prof. Osinbajo also emphasised, in his remarks, the importance of Nigeria’s unity for the realization of its great potential.

“One of the most important things for our country is that we must be united, there is no other way. The reason is because the greatness of this country depends on our numbers and diversity.

“If you look at other African countries, many of them are smaller than states in Nigeria. This is a country that works best when we are together. Despite religion and tribe, every one of us must come together.

“I look forward to ensuring that our country becomes one that is truly great. But it can only realise its true potential, if we all work together to achieve that potential.

“I know that this country can be united, because the people of this country want to be united and work together. If we are united in this country, everything will work easily. For me, one of the most important things is fairness and balance,” Prof. Osinbajo told the delegates.”

On his arrival at the helipad in Zamfara State, the Vice President received a robust welcome from the state led by Governor Bello Matawalle; his deputy, Hassan Nasiha; as well as former governor Abdul’aziz Yari, among other prominent state government officials.

Similarly, the VP was also later received at the Katsina airport by Governor Aminu Bello Masari and other senior state government officials.

In both states, residents, both young and old, trooped out to cheer the Vice President as his convoy drove past and stopped at different locations, with chants of “Sai Buhari! Sai Osinbajo! You’re a good leader,” from some of them.

During his courtesy calls to the Emirs of Zamfara and Katsina, where he also met with members of each State’s Traditional Council of Chiefs, Prof. Osinbajo formally informed the Emirs of his presidential bid, which they commended greatly and gave their royal blessings.

Welcoming the Vice President to the State, the Emir of Zamfara-Anka, and Chairman, Zamfara State Council of Chiefs, HRH Alhaji Attahiru Muhammad Ahmad, said to the VP: “We adore you for your loyalty to your boss, President Muhammadu Buhari. We also appreciate you for being tenacious, God-fearing, a bridge builder, and for your intellectual prowess.

“These have earned you admiration and support of many Nigerians who support your aspiration to contest for the leadership of our dear country.

“Your Excellency, we wish you well, we pray to Almighty Allah to help you attain your desire to be President of Nigeria. We wish you success.”

Similarly, the Emir of Katsina, HRH Abdulmuminu Kabir Usman, CFR, at his palace, said to the VP: “Take it from me, we are behind you; we support you. Someone with experience is a better person than someone who is very new to the administration; so, you are on board already. We will continue to pray for you. By the Grace of God, you are going to make it; we shall pray for you with all our hearts.”

In the same vein, Governor of Zamfara State, Bello Matawalle and the former governor, Abdulaziz Yari, among other stakeholders, told the VP that they decided to come together to welcome him to the State to show their respect for him and support for his presidential aspiration.

Praising the VP’s leadership qualities, his dedication and service to the country, as well as passion for its development, Governor Matawalle told the Vice President, “You are a man of the people,” while noting that the State is fully behind his bid and will support him.

“Your excellency, your interest to contest for the number one position in the country has clearly shown how you intend to continue the good works of President Muhammadu Buhari in the development of the country. Continuity in leadership is what is required. You have nothing to worry about,” Katsina State APC chairman, Sani Aliyu Daura, said at the delegates meeting.

In both states, the Vice President had robust interactions with the APC delegates and stakeholders. In a Question-and-Answer format, the VP addressed several issues, including on the economy, security, agriculture, education, women and youth empowerment, among others.

Laolu Akande
Senior Special Assistant to the President on Media & Publicity
Office of the Vice President
22nd May, 2022