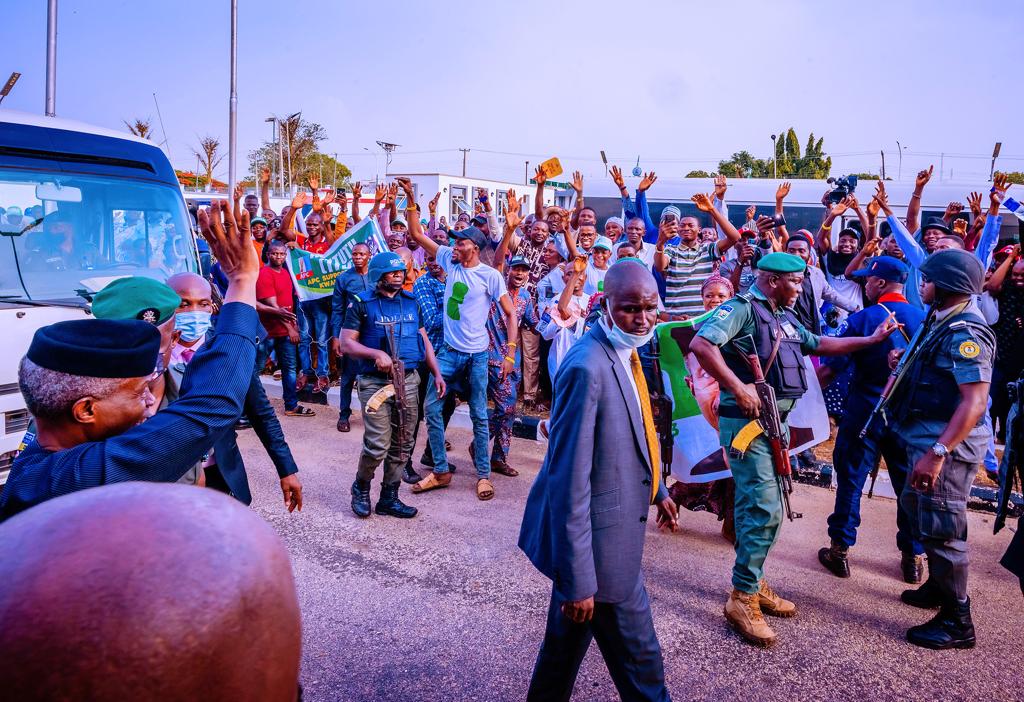 *Nigeria needs a President in 2023 with experience – VP

In a display of their admiration and support of his aspiration, the people and residents of Kwara State on Monday lined up the streets, all the way from Ilorin airport to welcome Vice President, Prof. Yemi Osinbajo, SAN to the State.

Prof. Osinbajo was in Ilorin yesterday in continuation of his consultations and interactions with delegates and stakeholders of the All Progressives Congress (APC) ahead of the party Presidential primaries on May 30.

The boisterous crowds were at the airport, on the streets, at the Emir’s palace and at the venue of the Vice President’s meeting with the delegates, singing, dancing and many bursting out in delighted surprise on citing the VP inside the Coaster bus that conveyed him and the State Governor, Abdulrahman Abdulrazaq.

At several points, the Vice President’s convoy stopped briefly as the VP acknowledged cheers from the excited residents and groups displaying banners, showing support for the VP, much like in a festive mood.

On his arrival at the State capital, the VP’s first port of call was to pay courtesy to the palace of the Emir of Ilorin, Dr. Ibrahim Sulu Gambari, to get the royal blessings and to also formally inform him (the Emir) personally of his aspiration to run for President in the 2023 elections.

Prof. Osinbajo noted that he is running for President because he believes the country needs a leader who has the experience and would be able to get the job done right from day one when sworn in on May 29, 2023 by God’s grace.

“Everything that has been given to me by way of knowledge and experience has been given to me by the grace of God and by the benevolence of this same country that we owe so much. So, this is why I am running for the position of President of the Federal Republic of Nigeria. I am mindful of the challenges that we have…, but I believe that the time comes for steadiness in resolving these issues. This is not the time for experimenting,” the VP stated.

He also thanked the Emir for his warm hospitality, his counsel and great affection over the years, even as he prayed for the Emir’s long life, peace and prosperity of his kingdom.

While receiving the VP, the Emir lauded the credentials of the Vice President, Prof Yemi Osinbajo saying his track record is something to be proud of.

“May God guide you and protect you,” the Emir prayed as he encouraged the VP saying, “we know you can do it.”

The VP was accompanied to the Emir’s Palace by the Kwara State Governor Abdulrazaq, who had earlier received him, alongside other state government officials, at the Ilorin airport.

In the same vein, Governor Abdulrazaq praised the VP for his leadership qualities and for championing the welfare of ordinary Nigerians, including his role in supervising the Social Investment Programmes of the Buhari administration.

Noting that the SIPs have positively impacted the lives of many Nigerians across the country, the Governor said the Vice President is a man with great vision.

During his interaction with the APC delegates and stakeholders later on, the Vice President restated that, “today our country requires some experience (to run), it is not just enough to have capacity. You must also be able to hit the ground running from day one because we don’t have time. Our country now needs everything it can get to make sure that we are able to make progress quickly.”

Prof. Osinbajo further stated that “the only reason I am running is to serve this country. And I will be completely transparent and honest. And I will do the work, God helping me, every single day without any other desire but to make sure that our country succeeds.”

The Vice President urged delegates to make their choices with utmost consideration about “the destiny of our children. “This is (about) our future,” he added.

His interaction with the delegates and stakeholders featured mainly a question and answer session where the Vice President responded to the many questions and comments of the stakeholders. He also took time to snap one-on-one photos with all the stakeholders present as has been the case in every one of his meetings in all the States.

Laolu Akande
Senior Special Assistant to the President on Media & Publicity
Office of the Vice President
17th May, 2022