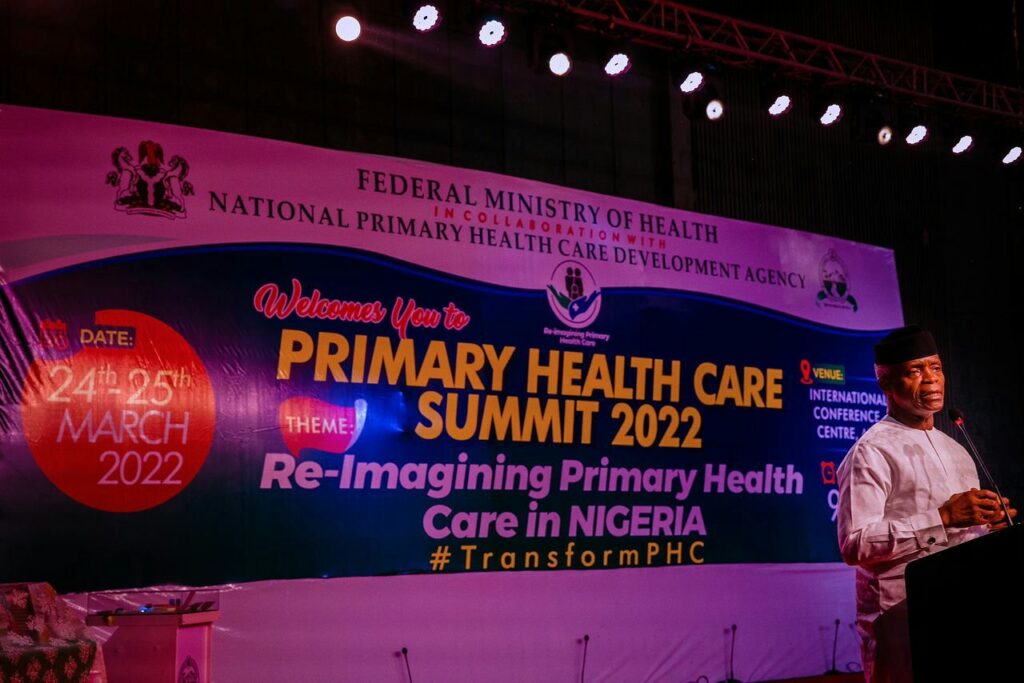 There is a great need for synergy between government at all levels and the private sector so as to further improve access to healthcare services, especially for the vulnerable population, and ensure the general development of the nation’s primary healthcare system.

“There is no way that healthcare funding can be paid for by government budgets alone,” the VP stated.

Prof. Osinbajo added that there was an urgent need for collaboration between governments at all levels to address “some of the drawbacks occasioned by the concurrent constitutional status of primary healthcare.”

He said “there is a great need for synergy, to prevent the Federal, States, Local Governments and private persons from duplicating primary health facilities,” while “encouraging and supporting serious private sector interventions.”

Further highlighting ways to reform and re-imagine the health sector, Prof. Osinbajo who is the chairman of the Health sector Reform Committee set up by the President, restated the importance of a compulsory health insurance scheme, especially one where “premiums for certain categories of vulnerable groups are paid by the government.”

“As the Honourable Minister of Finance has said, the target is 100% coverage for the poor and vulnerable in the short to medium term,” he said.

“Aside from funds, what the private sector should bring to the task are models of efficiency and cost-saving market-driven ideas,” the Vice President noted, pointing out a couple of private sector-led interventions, such as the Aigboje Aig-Imoukhuede-led Adopt-A-Health-Facility Programme (ADHFP) – a private sector-driven initiative to provide universal health access for low-income citizens residing in rural and urban areas in Nigeria; and the EHA Clinics integrated health care service provider approach.”

The VP stated: “through its Reach Programmes, EHA has brought effective healthcare to over 11,000 people, in Kano alone. The effort leverages on partnerships with non-governmental organisations and pharmaceutical companies to negotiate treatment prices and also train community health extension workers to provide affordable primary healthcare services to people in the communities.”

Even as he urged for more interventions from the private sector to support government efforts in this regard, Prof. Osinbajo added that repositioning Nigeria’s healthcare sector to address major health indices remains a critical component of the Buhari Administration’s development agenda.

It would be recalled that in January 2022, President Muhammadu Buhari inaugurated the Health Care Reform Committee, which is chaired by the Vice President.

Recalling the mandate of the Committee, the VP noted that “the primary objective is to reengineer our healthcare delivery system such that it becomes, in the President’s words, people-centric, modern and virile; a healthcare system that addresses the depressing health indices frontally.

“Since I was asked to chair that committee, I have interacted with a broad range of institutions and individuals and it is evident that there is a great deal of excitement and expectation about what is possible.”

The VP also pointed out other government’s responses towards improving healthcare such as the “Basic Healthcare Fund seeking to address the cost of healthcare for the poor, Nigeria’s COVID-19 response measures, including the health sector component of the Economic Sustainability Plan, the establishment of Healthcare Sector Intervention Fund Facility which has already disbursed almost N80 billion to finance the acquisition and installation of critical medical equipment and the expansion of production lines in some pharmaceutical companies.”

He added that “there are also the WASH Initiatives, especially the ‘Clean Nigeria: Use the Toilet’ Campaign led by the Federal Ministry of Water Resources; the extensive work now being done by the National Council on Nutrition, and the National Food Systems Dialogues and special initiatives on large scale food fortification such as the Food Processing and Nutrition Leadership Forum Led By Alhaji Aliko Dangote.”

The Vice President noted further that the impact of the COVID-19 pandemic on the developing world and global economies showed why a premium should be placed on building effective primary healthcare systems.

According to the VP, the Covid-19 pandemic revealed several key lessons for him, the most important of it being that “a health system is only as strong as its primary healthcare system.”

He explained: “The first is that a health challenge of sufficient enormity can cripple the global economy and severely worsen the circumstances of the weakest economies and most vulnerable groups. The second is how some of the wealthiest and most developed economies of the world were tragically unprepared to handle a public health crisis on the scale and uncertainty of Covid 19.

“The third is that when there is a global health crisis on the scale of the Covid-19 pandemic, we cannot expect any or much help from anyone. Every nation is on its own. The vaccine nationalism-first response of wealthier countries to the distribution of vaccines was certainly a wake-up call for poorer countries. Happily, things have improved with the greater availability of vaccines.

“The fourth is that despite infrastructural weaknesses, we have an experienced and robust public health system, peopled by some of the best personnel in the world. You heard Dr Faisal brag about how we maintained 56% in routine immunization. The fifth is a conclusion from the preceding points – a health system is only as strong as its primary healthcare system.”

Prof. Osinbajo commended the Minister of Health, Dr. Osagie Ehanire for his commitment towards advancing healthcare causes in the country. He also acknowledged the efforts of the Minister of State for Health, Dr. Olorunimbe Mamora, as well as the Executive Director/CEO of NPHCDA, Dr. Faisal Shuaib, and his team.