GOVT AGENCIES MUST HOLD CITIZENS IN HIGH ESTEEM, BE RESPONSIBLE TO THEM – OSINBAJO 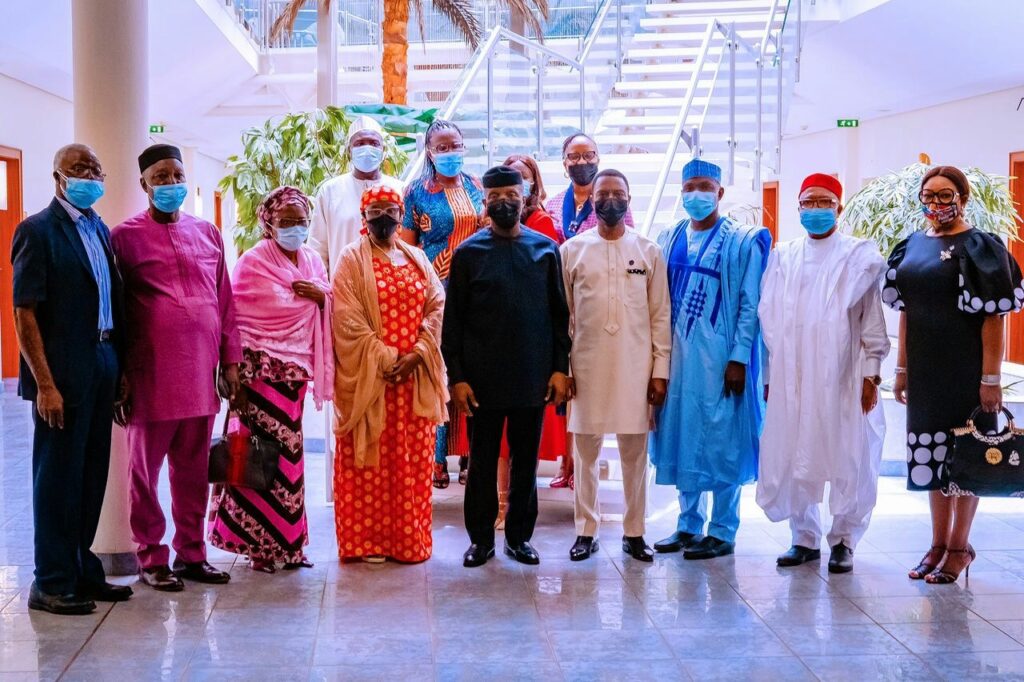 Beyond core regulatory roles, Government agencies must always show that they are responsible to the people that they serve and that they hold them in high esteem, according to Vice President Yemi Osinbajo, SAN.

Prof. Osinbajo stated this on Monday when he received at the Presidential Villa, Abuja, a delegation of the West African Examinations Council (WAEC) in town for the Council’s 70th Annual Meeting.

“It is very important that we show respect for our citizens and show that we are concerned about them, that we are not just a regulatory body that feels that its role is just to be a policeman, and all of that. I think we must also show that we are responsible for the people that we serve and that we hold them in high esteem,” the Vice President said.

For instance, Prof. Osinbajo highlighted and praised the prompt response of the examinations body to the issue of some candidates having difficulties regarding the National Identification Number (NIN), where the body responded that due to the challenges with the NIMC portal at the time, the affected candidates could still sit for the exams.

“These kinds of quick responses show respect for citizens,” the Vice President stated, adding that he is also personally happy that the Examinations Council is responsive and aligning with the digital technology age in different areas.

“Just looking at the press reports and what WAEC has done, it has shown that it is very responsive to the needs of society. I was particularly impressed by the new digital certification that was announced some time ago, that if one lost his/her WAEC certificate, you can apply for the digital copy, which means your records are never lost.

“There is no need for the long and hard process of seeking for a certified (physical) copy. I think this is true response to the times. That is very good,” he said.

The VP also congratulated WAEC for its achievement since it was established about 70 years ago.

While highlighting the important role of the Council in the nation’s educational development, Prof. Osinbajo said many Nigerians have benefitted from the WAEC certification over the years.

“It (WAEC certification) is almost like a birth certificate,” the VP stated, underscoring the significance of the Council’s certificate.

“Everyone who has watched WAEC progress over the years would agree that WAEC is a huge part of our history as a nation. WAEC certification has that importance and it has been like that for 70 years. So, I think it is worthy of celebration and commendation, WAEC has done so very well through the years.

“So, I congratulate you, the Nigerian team, and the WAEC Council, not just for being given the special privilege of hosting the 70th anniversary, but also because we are clearly the largest contributor and beneficiary and this has been so for 70 years.”

In her remarks, the leader of the Nigerian members of WAEC, who is also the Director, Basic & Secondary Education, Federal Ministry of Education, Hajia Binta Abdulkadir, thanked the Federal Government of Nigeria “for the opportunity to host the 70th Annual Council Meeting, as well as the support to the Council over the years.”

She added that the Council is the highest decision-making body of WAEC with membership drawn from the 5 member countries – Nigeria, the Gambia, Sierra Leone, Liberia, and Ghana.

She also disclosed that the Annual Council Meeting is used to deliberate on providing qualitative and educational assessment, encouraging academic and moral excellence, promoting human resource development, and promoting international cooperation among the five-member countries.