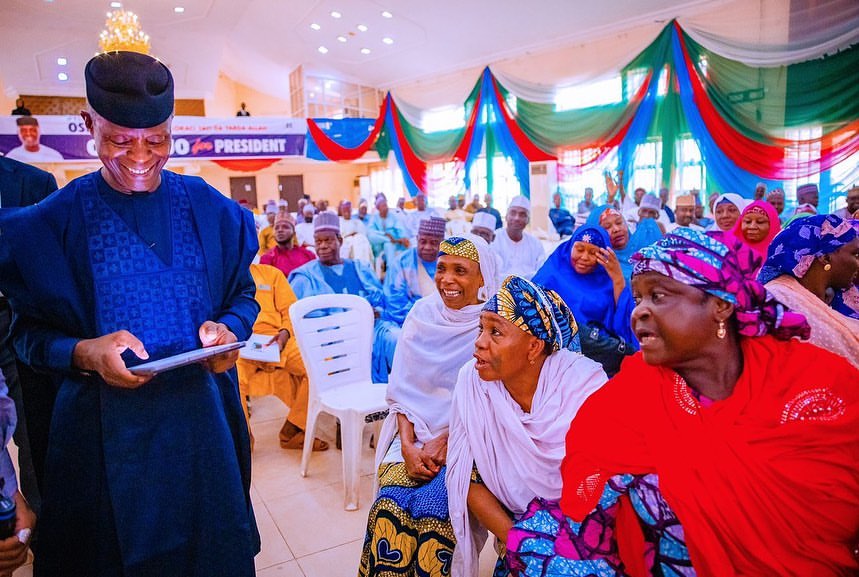 With about a week to its presidential primaries, commendations have continued to pour in from state governors, their deputies, and stakeholders of the All Progressives Congress (APC) for Vice President Yemi Osinbajo, SAN, who is running for president.

On Sunday, in Kebbi and Kaduna States respectively, where Prof. Osinbajo visited in continuation of his consultations with APC stakeholders and delegates across the country, the VP was commended for his efforts in improving governance and dedication to the progress of the country, while stakeholders also canvassed for continuity in government.

During the Vice President’s meetings in the states, both Kaduna State Governor Nasir El-Rufai, and Kebbi State Deputy Governor, Samaila Yombe, spoke glowingly about the VP’s qualities, with a call for continuity.

Kebbi and Kaduna States inclusive, the Vice President has now visited 28 states, and the FCT, in his nationwide interactions with the ruling party delegates and stakeholders.

According to Governor El-Rufai, Prof. Osinbajo is “the number one confidante of the President (Muhammadu Buhari), and “has the respect of all the governors of Nigeria, across party lines, because of the way and manner he steers the affairs of the National Economic Council.”

Noting that the VP had visited the State on several occasions, Governor El-Rufai said the Vice President “is not just here because he is running for president. He is here because he has close affinity to the government and people of Kaduna State. I want those that don’t know, our party leaders and delegates, to know that Prof. Yemi Osinbajo has always shown uncommon love for the people of Kaduna State.”

Speaking further of the VP’s leadership qualities, the Kaduna State Governor said of Prof. Osinbajo: “I have worked very closely with the Vice President in the last seven years. Before then, we worked as senior officials of the party to craft the party’s strategy, as well as manifesto. We jointly wrote the manifesto of the party together as members of the strategy committee of the party.

“He is a man of intellect, brilliance; a unifier, a detribalized Nigerian; who has shown us leadership as chairman of the National Economic Council.

“It was under Vice President Osinbajo’s leadership that our Paris Cub refund, that was deducted in 2005, was finally paid to all the States, and we are all beneficiaries. It was under his leadership that recommendations were made to bail out 27 states, that, in 2015 were unable to pay salaries. I can go on and on to list the qualifications and virtues of Vice President Yemi Osinbajo.”

Urging the delegates to “vote for the best person that will take Nigeria to that promise land,” Governor El-Rufai added: “In Kaduna State we are people of honour. So, please remember that the future of Nigeria is at stake. Nigeria is at a critical crossroads and the choices we make in 2023 will, to large extent, determine whether this country progresses rapidly to achieve its manifest destiny or not.

“We must put all our sentiments and personal interests aside, and vote for the best person that will take Nigeria to that promise land.”

Also, in Kebbi, the State Deputy Governor, Samaila Yombe, stated the “need for continuity in government.”

Yombe said, “President Muhammadu Buhari is our president and will be for 8 years (by May, 2023). He has an able backbone in the person of the vice president.

“We will now stand on both feet to make sure of that continuity, and the pledge that all of us have given here is an assurance, Mr. Vice President, that we will see you there by God’s grace.”

Also speaking, the Kebbi APC Chairman, Alhaji Muhammadu Kana, noted the Vice President’s efforts in ensuring a peaceful and united country. “Our vice president, we wish you well, we wish you success,” he added.

At his meeting with delegates in the States, Vice President Osinbajo noted that Nigeria is at a crucial stage in her history where continuity is government is needful to ensure the completion of many ongoing development projects started by the Buhari administration, and also further progress for the country.

During his courtesy call to the Palace of the Emir of Gwandu and Chairman, Kebbi State Traditional Rulers, Alhaji Muhammadu Iliyasu Bashar, yesterday, Prof. Osinbajo said, “I’ve served as vice president for the past seven years under the able leadership of President Muhammadu Buhari. During that seven-year period, I have had the unique opportunity to work with an open and transparent president.

“My experience is crucial, especially in governing a country of our size. This is why I decided to put myself forward to serve as president. There are other people vying for that position (of the president); several competent Nigerians and competent members of our party, the APC. We all know that all power belongs to the Almighty God. He is the one who determines who rules; we can only hope and pray and put ourselves forward.

“I believe strongly that the stage that our country is at, is one that requires continuity of the sort that will enable us achieve great results.”

Thanking the Emir for his kindness, generosity, and counsel, the Vice President said “the result of your counsels has given us the successes that our government has had over the years.”

He noted several ongoing infrastructure projects, such as the Ajaokuta–Kaduna–Kano (AKK) gas pipeline, the Lagos-Kano Standard Gauge Railway, Port-Harcourt-Maiduguri rail project, among many others.

The VP added that, “It makes perfect sense if I am given the opportunity of concluding those projects and doing so many other things, I will do so.”

Similarly, at his meetings with delegates in Kebbi, Prof. Osinbajo restated that “It is God who gives power, only God can put a man or woman in position, and if God puts you in a position, nobody can change it.”

He added, “I offered myself as presidential aspirant of our party, because I know that by the grace of God, if God helps me to be elected, we will change our country for the common man, for the politician, for the rich, poor, young, women, children, and the old. Let us work together, your votes will determine the future of our country.”

“This is a complex country, but it is a country that must remain united, that must remain secure, and we must improve the economy for the benefit of millions of young people and all Nigerians.”

Also, Prof. Osinbajo also stated that there is room for improvement in the areas of security, economy, and technology.

On the ongoing revamping of the country’s security architecture by the Buhari administration, the VP noted that “at the end of the day, we will be able to tackle our present challenges, but we must be prepared to deal with future security challenges also.”

On the Social Investment Programmes, the VP said, “we are going to expand the social investment programmes to become a full-scale social welfare programme. We must also ensure that our young people are employed, engaged and we must have a plan for them.”

Laolu Akande
Senior Special Assistant to the President on Media & Publicity
Office of the Vice President
23rd May, 2022