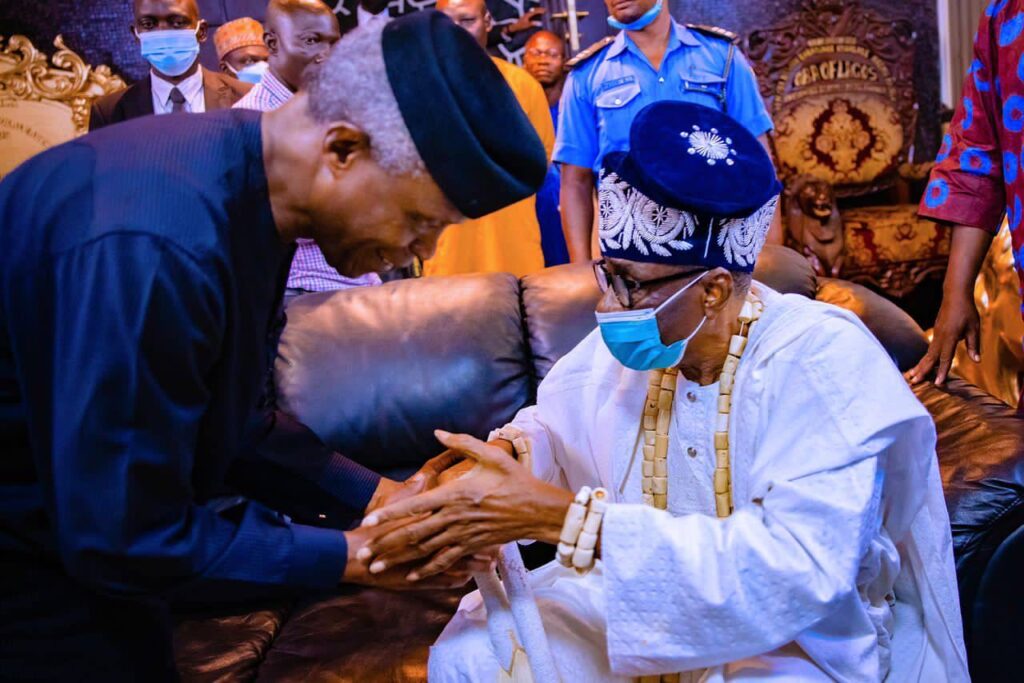 *VP speaks of a new Nigeria ahead, as he completes nationwide interactions with party delegates, stakeholders in Lagos, Benue

*Oba of Lagos to VP: You are a complete gentleman

Ahead of the Sunday’s presidential primaries of the All Progressives Congress (APC), Vice President Yemi Osinbajo, SAN, on Wednesday received an electrifying reception in Lagos State as he completed his nationwide visits to canvass for the votes of delegates in the 36 States of the Federation, and the FCT, Abuja.

Earlier on Wednesday, the VP was also in Benue where he also got an exciting reception on arrival at the Airforce Base, Makurdi, where he was received by APC chieftains in the State and officials of the Benue State government.

Excited residents and groups, including a traditional troupe, also came out en masse to welcome the VP to the State capital.

In Lagos, the VP received a rousing welcome right from the presidential wing of the Murtala Muhammad Airport, Ikeja, and then to the venue of the delegates’ event, where, aside from the thousands congregated inside, a mammoth crowd had camped outside several hours earlier in the morning, anticipating the VP’s arrival. It was the same level of excitement when the VP’s convoy drove all the way to the palace of the Oba of Lagos.

At the courtesy visit to the palace of the Oba of Lagos, Oba Rilwan Akiolu 1, the Vice President recalled that “as I said to the delegates, my intention is to serve this country, honestly, transparently and to do everything in my power to make sure that this country realizes its full potential.

“There is every reason to do that for our country. We must be able to serve this country in such a way and do everything – youth employment, security, the economy, and so many things that the President has focused on in the last seven years. This is the reason why I’m running.”

Welcoming the Vice President, the Oba described him as a complete gentleman to the core and recalled how he was a law student taught by Prof. Osinbajo. According to the Lagos monarch, “the VP taught me about the evidence of striking similarities’ at the University of Lagos.”

He added, “Yesterday, I was 19 years on this enviable throne. Asiwaju Ahmed Tinubu and the VP (as Attorney-General of Lagos State) played important roles in me becoming the Oba.”

The rousing receptions in both Benue and Lagos States were a fitting climax to the robust nationwide consultations of the Vice President with stakeholders and delegates of the ruling party.

When Prof. Osinbajo arrived at the venue of the Lagos APC meeting in the evening, the atmosphere took the form of a festival with singing and dancing, and the outpouring of massive affection, admiration and support for the VP and his presidential bid. He was received at the venue of the event in Oregun by a coterie of State officials and supporters led by Lagos State Deputy Governor, Obafemi Hamzat.

Indeed, Lagosians rolled the drums to welcome their own, the Vice President, with dancing and singing celebration songs, because according to Dr. Abdulhakeem Abdulateef, the Chief Imam of the Lagos State House of Assembly, the eventual victory of the VP is already in sight. He relished the audience with how Lagosians are very proud of the many feats of the VP, who he noted is a true Lagosian on many fronts.

Addressing delegates and members of the APC family in Lagos, Prof. Osinbajo said he has “come home to celebrate with his brothers and sisters and to thank God for all that He has done and all He will yet do.”

“But I want to say to you that we have ahead of us, a new Nigeria and I’m completely certain that God helping us, we will get to that new Nigeria,” he added.

Restating the reason he is running for President, Prof. Osinbajo told delegates that, having served under President Muhammadu Buhari as Vice President for seven years and counting, he will continue to give his best in service to the country.

“The truth of the matter is that God does not makes mistakes. He gave me those experiences and allowed me to serve as Vice President because a time will come when our country will need new leadership. And that time has come. It is time, now. You will agree that someone with seven years’ experience will be better than someone with no experience at all.”

“God helping me and us, by the grace of God, we will achieve this aim of bringing about a new Nigeria and that all of us who are here, will see that new Nigeria… I know we will have the massive support of all our delegates on Sunday at the primaries because everyone wants a new Nigeria.

“We want a Nigeria that will be secure, where there will be enough employment for our young people, a Nigeria that has a secure economy, where young men and women will fulfil their ambitions here in this country. And I’m sure that we can achieve that. But Sunday is only the beginning. We will win by the grace of God, and we will go on to win the general elections for our great party the APC, in Jesus’ mighty name.”

“Today is not the day for speeches, it’s just a day for celebration. So let us just celebrate,” the VP concluded, with a Yoruba song loosely translated as “higher and higher we will go.”

Prof. Osinbajo also acknowledged the unity of diverse ethnic communities present at the event – including Hausa (Arewa) and Igbo groups, and the rousing reception he received from them in Lagos.

The VP also specially acknowledged the Chief Imam of the Lagos House of Assembly, whom he noted “has championed the course of my presidential bid and a new Nigeria especially all around the South West.”

While addressing the excited audience earlier, the Chief Imam said “Nigeria is a country we must be ready to build. We are promoting the new vision, extending the hand of charity, and helping Nigerians regardless of their tribe, language or their religion.

“We are happy to be members of the New Tribe and that’s what our Vice President represents. We thank God for his life and we are now going to be prayerful that God shall fulfil his mandate.”

In his remarks, the representative of the Arewa community, Ali Bashir, urged APC delegates to do their work well to ensure Prof. Osinbajo emerges successfully as the APC presidential candidate.

According to him, “we are waiting for the delegates to play their role while we play our part. We are here to celebrate ahead of victory, Insha Allah.

“The Arewa community is solidly behind you. We see the zeal, ability, capability, and competency in you. We see the footsteps which will take this country to the desired light. We believe you are the pilot who can really take Nigeria to greater heights.”

Other speakers also expressed their solidarity and support for the Vice President’s candidacy, including the representative of the Igbo community.

Earlier in Benue yesterday, after his interactions with APC stakeholders and delegates in the State, the VP said he was “very satisfied with the engagements and the partnership not just for now, but for the future.”

Speaking further on the forthcoming APC presidential primaries, the Vice President told the Benue delegates that their votes at the weekend will affect the country for good.

He said the question should be “do you think that this person can do the work? Do you think he will do it honestly, transparently and put everything into it?”

The VP who started the day from Abuja to Benue State and then Lagos State returned to Abuja last night.