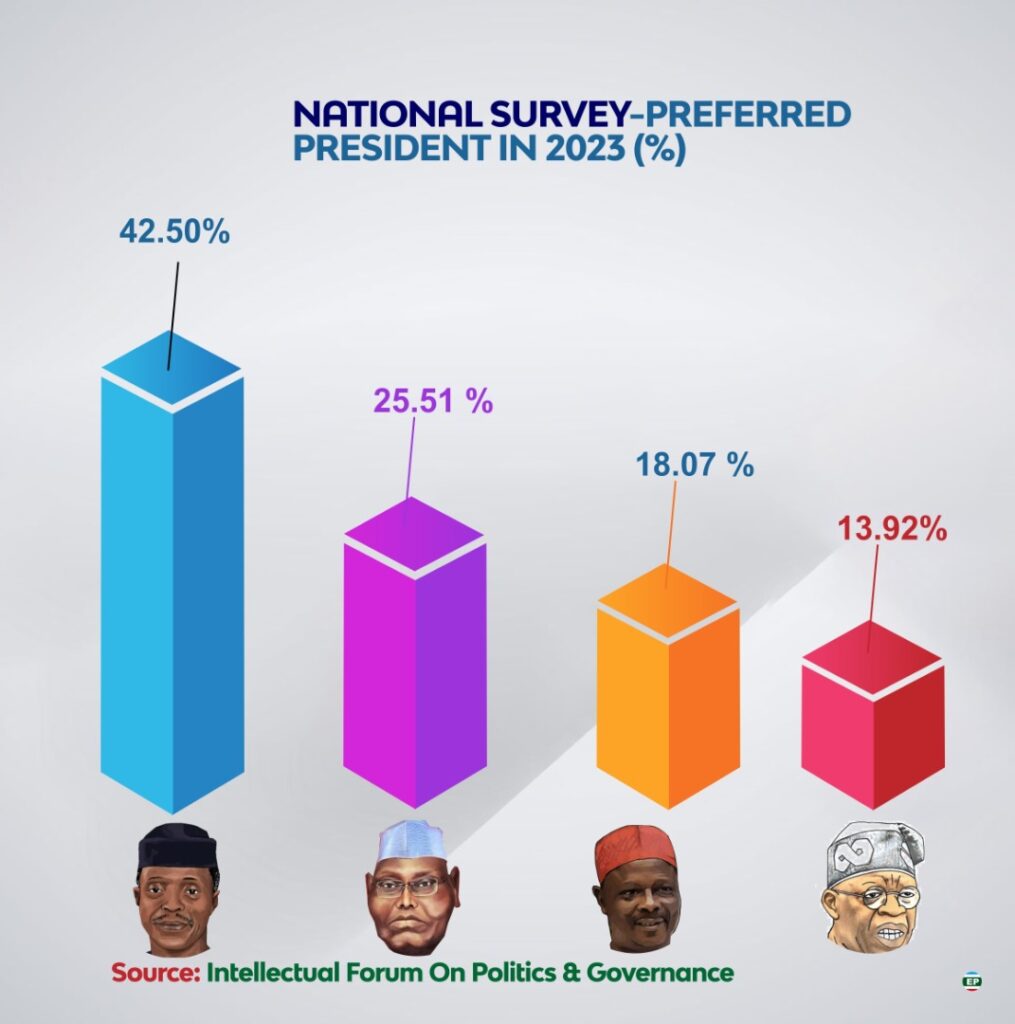 Osinbajo Support Movement has welcomed the recently conducted survey analytics on who is the best candidate to succeed President Muhammadu Buhari in 2023. The group through a statement released today and signed by its Convener, Mr Liberty Badmus acknowledge that Nigerians are the best judge and they have made their voice loud.

The statement reads in part;

“OSM welcome the resolution and submission of Intellectual Forum on Politics and Governance (IFP&G) signed by its secretary, Prof Ike E. Ogba on the survey carried out to x-ray the pulse of the nation, the choice of the people relative to 2023. We say the survey is time-bound owing to the heated polity of this moment. As well, we note unequivocally that it is a brilliant submission, especially when it comes from sound but painstaking analysis, informed mindsets and the intellectuals.

With the outcome of this survey, we can boastfully submit that Nigerians across length and breadth of the nation, from all divides are insightful to what we see at OSM and they all share the same conviction and contention.”

“No doubt, Prof Yemi Osinbajo is a candidate that none among the candidates that has expressed interest to run for President can beat his reach. We make bold to assert that none of them is equalled to his match, his heavy credentials, brilliance and composure. His wide and versed experience in governance also sets him at edge ahead of others.

The poll that gave Prof Yemi Osinbajo more than 42% of all shown interest is affirmative of glaring facts and realities that has been in the public light for the past years he is in public service. As well, Nigerians could not cease to share their admiration for a man that has commit himself to good governance and welfare of the people he serve. This is uncommon and rare administrative character known with political class and elites, that has served and serving this nation. It is safe to submit that Nigerians really acknowledge what makes up the VP and share from his visions to become president.”

“Osinbajo Support Movement wishes to thank Nigerians of goodwill who continue to advocate and front widely the Osinbajo Message, champion the cause, and trend his name and aspiration every minute. Your efforts is acknowledged with deep gratitude.

We use this ample moment to urge the delegates of our great party, All Progressive Congress (APC) to identify with the Face of Hope, the man whose pedigree and profile best fits the seat of the President. You all should understand that making your choice, in voting for Prof Yemi Osinbajo in the party primary is the best bet for the party to retain the Aso Rock in 2023, and the best for the nation going forward. We trust the delegates will make the best choice for the party.”

“Osinbajo’s name and agenda shall remain at the front burner of the nation political discourse, positively, and representative of the interests and of Nigerians. We wish all happy Eid-l-Fitr celebration.”

Directorate of Media and Publicity,