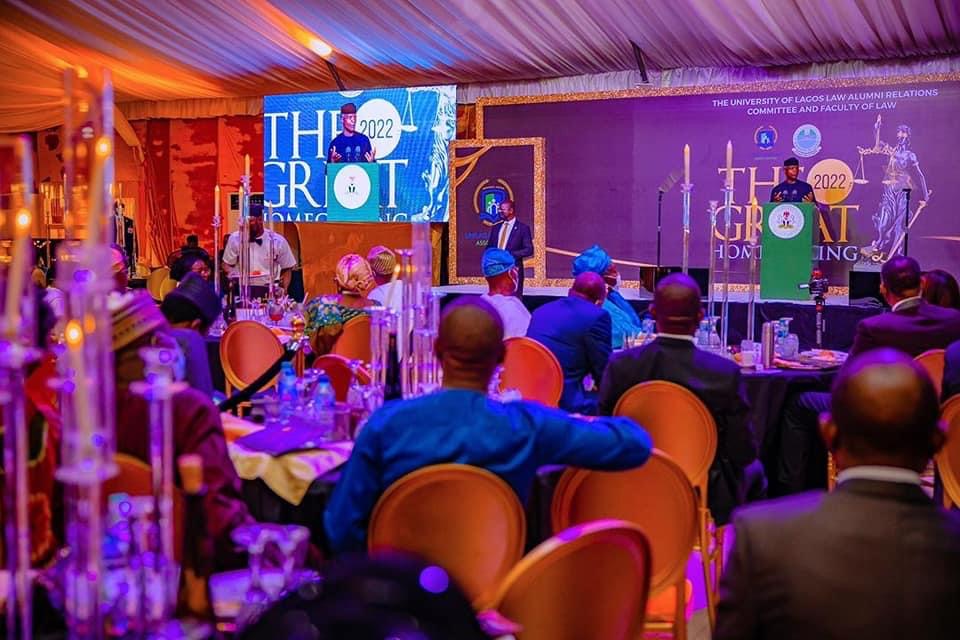 The achievements of the alumni of any place of learning are the “real evidence of the success” of that institution particularly its contribution to the growth of society, according to Vice President Yemi Osinbajo, SAN.

Prof. Osinbajo stated this on Saturday evening in Lagos at the reunion dinner of the Faculty of Law, University of Lagos, tagged “The Great Homecoming.”

The Vice President, in his remarks at the dinner, reeled out notable achievements by some alumni of the University of Lagos Law Faculty in several areas of professional endeavours including sports, entertainment, fashion and at different levels of legal practice.

He cited the Lagos Judiciary as an example noting that “it cannot surprise anyone that we (University of Lagos Alumni) have consistently produced the Attorneys-General in Lagos State, the heart of legal practice in Nigeria.”

According to the Vice President, “the real evidence of the success of a place of learning and inquiry is the success of its alumni. The reputation and goodwill of the alumni is the rationale for the prestige of the school.

“We must all be proud of the remarkable array of alumni of the UNILAG Faculty of Law and their great achievements, not just in law but in practically all fields of human endeavour.”

BELOW IS THE FULL TEXT OF THE VICE PRESIDENT’S REMARKS:

I congratulate the Faculty of Law, University of Lagos, its management, staff, students and alumni on the successful series of events that commenced on Wednesday. I must commend the National Executive Committee for organising this great reunion of some of the finest Akokites and Africa’s best minds here in this room.

Let me specially thank the Dean of the Faculty of Law, Prof. Ige Bolodeoku, for the invitation to come home. UNILAG is home not just because I spent the formative years of my university education, as well as the vast majority of my career in academia there, but also because home, as they say, is where the heart is. And this should hardly surprise anyone.

Everywhere you go, there is something, always something, that keeps your heart calling back to the University of Lagos. The real evidence of the success of a place of learning and inquiry is the success of its alumni. The reputation and goodwill of the alumni is the rationale for the prestige of the school. We must all be proud of the remarkable array of alumni of the UNILAG Faculty of Law and their great achievements, not just in law, but in practically all fields of human endeavour.

Let me take you on my own inexact compilation (and I apologize in advance for those I may inadvertently leave out.) The UNILAG Faculty of Law has by the quality of its alumni defined legal practice in Nigeria.

At the apex of the Nigerian judiciary is Her lady-ship the Hon. Justice Kudirat Kekere-Ekun and last year she was joined by the Hon Justice Helen Moronkeji Ogunwumiju, both alumna of the University of Lagos, Faculty of Law. Before them, the late, Hon. Justice Niki Tobi also served in the Supreme Court, and many will know that Justices Inyang Okoro and Justice Amina Augie, first went to the wrong Universities but ended up doing their masters at the University of Lagos! (General laughter).

In the private bar, there is Chief Wole Olanipekun, SAN, and possibly the wealthiest lawyer. He was the first of our alumni to be conferred the rank of SAN (I am not certain if that is correct, or whether it was Chief Kanu Agabi, SAN).

But Olanipekun is easily the leading constitutional lawyer in Nigeria. There is also the incredibly brilliant late Bankole Aluko, SAN. He co-founded what is probably Nigeria’s leading Law Firms Aluko and Oyebode, and there is also Femi Olubanwo, who is co-founder of Banwo & Ighodalo and recently won the Nigeria Law Firm of the Year Award.

In public service, both the 2nd and 4th Citizens, are products of this great Faculty: the Vice President of the Federal Republic of Nigeria, and the Rt. Hon Speaker of the 9th House of Representatives, Mr. Femi Gbajabiamila.

Two of my most senior aides were moulded in the crucible of this great Faculty – Mr Ade Ipaye, the Deputy Chief of Staff to the President and Dr Jumoke Oduwole, the Special Adviser to the President on Ease of Doing Business – both former students and lecturers of this faculty. Dr. Oduwole was the holder of the Prince Claus Chair from 2013-2015.

We also have many notable traditional rulers, including His Royal Majesty, the Oba of Lagos, Oba Rilwan Akiolu, who ascended to the throne of his fathers after rising to the rank of AIG in the Police Force.

So, I am sure that it cannot surprise anyone that we have consistently produced the Attorneys-General in Lagos State, the heart of legal practice in Nigeria; in the first 20 years of the 4th Republic, beginning in 1999 when I served as Attorney-General, then Supo Shasore, SAN, and then Mr. Ade Ipaye.

Some of our alumni have also excelled as both academics and highly successful courtroom lawyers. In academia, distinguished Prof Taiwo Osipitan, SAN, was legal adviser to the Chief of General Staff in the Abdulsalami Abubakar Administration. Dr. Muiz Banire SAN, was once Commissioner for Transport in Lagos State and Chairman of AMCON.

Of Senior Advocates, we have some who have excelled in so many different fields, including Mr. Fidelis Oditah who is the only one of us who is both QC and SAN, and Mr. Olusegun Fabunmi, SAN, and Dapo Akinosun, SAN, my former partner while I was with Simon-Coopers.

How about sports and entertainment? Adokiye Amesimaka while still here in the faculty played for Sharks Football club, Enugu Rangers and ACB, and was a member of the Nigerian national team that won gold at the African Cup of Nations in 1980.

Our alumni have also disrupted the entertainment industry, especially our women. Our own Bolanle Austen-Peters founded Nigeria’s first privately owned ultra-modern theatre, Terra Kulture, and she is the brain behind the dance-dramas – “Saro the Musical” and “Fela and the Kalakuta Queens”. Her feature film on the Ebola Outbreak – “93 days” was nominated in 7 categories and was the highest nominated film for the 2017 African Movie Academy Awards.

How about Funke Akindele! The world-famous “Jenifa”, an Academy Movie Award recipient and the producer of the movie “Omo Ghetto” – the highest-grossing Nigeria movie of all time. And another famous alumna Kemi Adetiba, who directed two blockbuster films – the Wedding Party and the King of Boys.

In the fashion world, Omoyemi Akerele is raising the Nigerian flag high and creating room for others while at it – she is the initiator of the Lagos Fashion Week – a fashion platform that drives the Nigerian and African fashion industry. And so many others doing exceptional stuff everywhere.

So let me end by congratulating the National Executive Committee of the UNILAG Law Alumni Association for a successful celebration. We are not first among equals. We are the first. There are no equals. Greatest Akokites!

Thank you, God bless you.

Released by:
Laolu Akande
Senior Special Assistant to the President on Media & Publicity
Office of the Vice President
13th February 2022