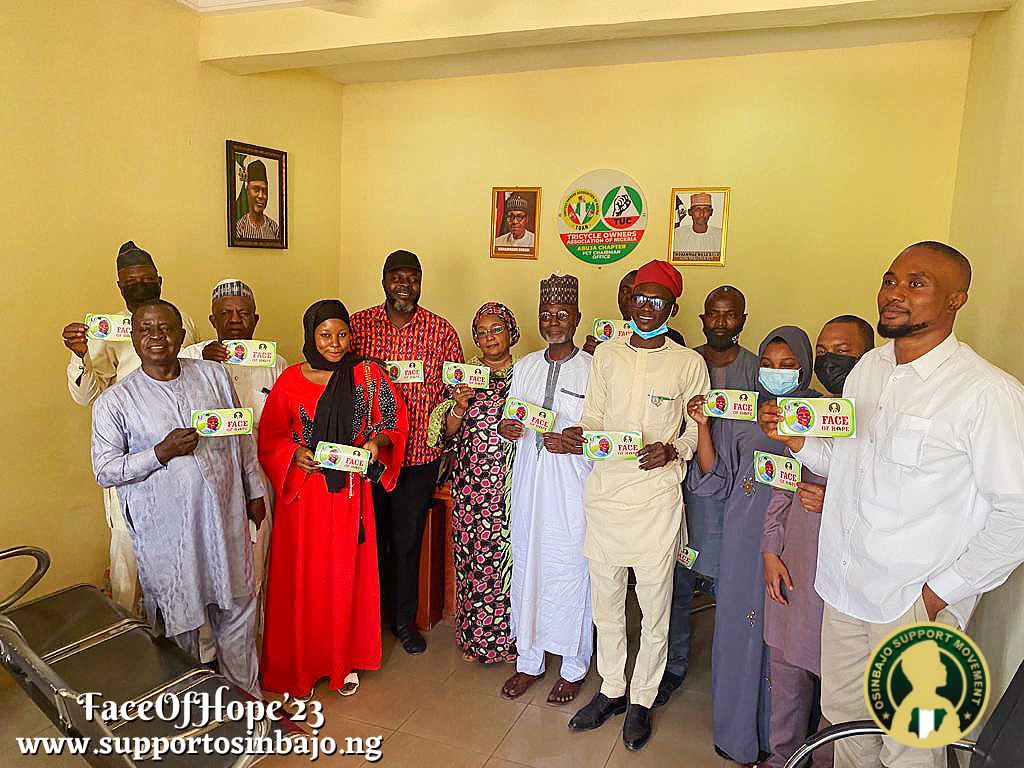 The Tricycle Owners Association of Nigeria (TOAN) on Tuesday throw their weight behind the candidacy of Vice President Yemi Osinbajo towards the 2023 Presidential elections.

TOAN made this known during a courtesy visit by the leadership of the Osinbajo Support Movement (OSM) to the Association’s office in Gwarinpa, Abuja.

The OSM delegation was led by the convener, Mr. Liberty Olawale Badmus who was accompanied by the women leader Hajia Aisha Muazu and other members of the Executive Committee of the Group.

The Group were warmly received by the Executives of the Tricycle Owners Association of Nigeria.

In his welcome address, the National Chairman of the Association, Alhahi Shehu Tata Sule, FCT Chairman who also doubles as the and Chairman of Chairmen of the Northern forum of the Association was emphatic in their determination to work with the OSM towards achieving the goal of the Group concerning the candidacy of Prof. Yemi Osinbajo (SAN).

He stressed the need for the two bodies to establish a synergy and harmonisation of their plans which will in turn animate a solid support base for the project.

He assured the group of the Association’s readiness to put their machinery, energy and passion nationwide into this cause.

In his words, ” We are encouraged and convinced to endorse Prof. Osinbajo because of his patriotic approach to issues of national importance coupled with his competence, character, charisma, courage, sense of fairness and ability to make big decisions in the interest of all.”

Responding, Mr. Badmus appreciated their passion and readiness to work with the OSM on this project.

According to him “We at the OSM are prepared to embrace the Association’s plans and incorporate them into the plans and programs of the Group as partners in progress towards achieving a common goal in the interest of the masses of our country.”

He particularly thanked the Association for their visit to the OSM few weeks ago. He further said, “The foundation of engagement and involvement laid at that meeting is begining to yield results to the benefit of a cause that should interest every well meaning Nigerian.”

Hajia Aisha Muazu, OSM women leader expressed delight in the readiness of the Association to be partners with the OSM, according to her, “The involvement of TOAN in the Presidential election in 2019 contributed in no small measure to the electoral success of the current administration at the polls.”

The OSM presented Face of Hope stickers to the Association for the use of their members on their tricycles to help spread the message of hope and growth for the nation with Prof. Osinbajo as the torch bearer of the desired next phase of profound leadership in the political development of the country.

The Association was encouraged to remain firm and resolute in their decision to support OSM and Prof. Osinbajo on this cause irrespective of possible temptations and inducements that they might encounter along the way.

The Chairman of the TOAN, concluded by expressing their delight with the visit which he described as timely and promised to work assiduously on their members to ensure that success is recorded at the end of the day.