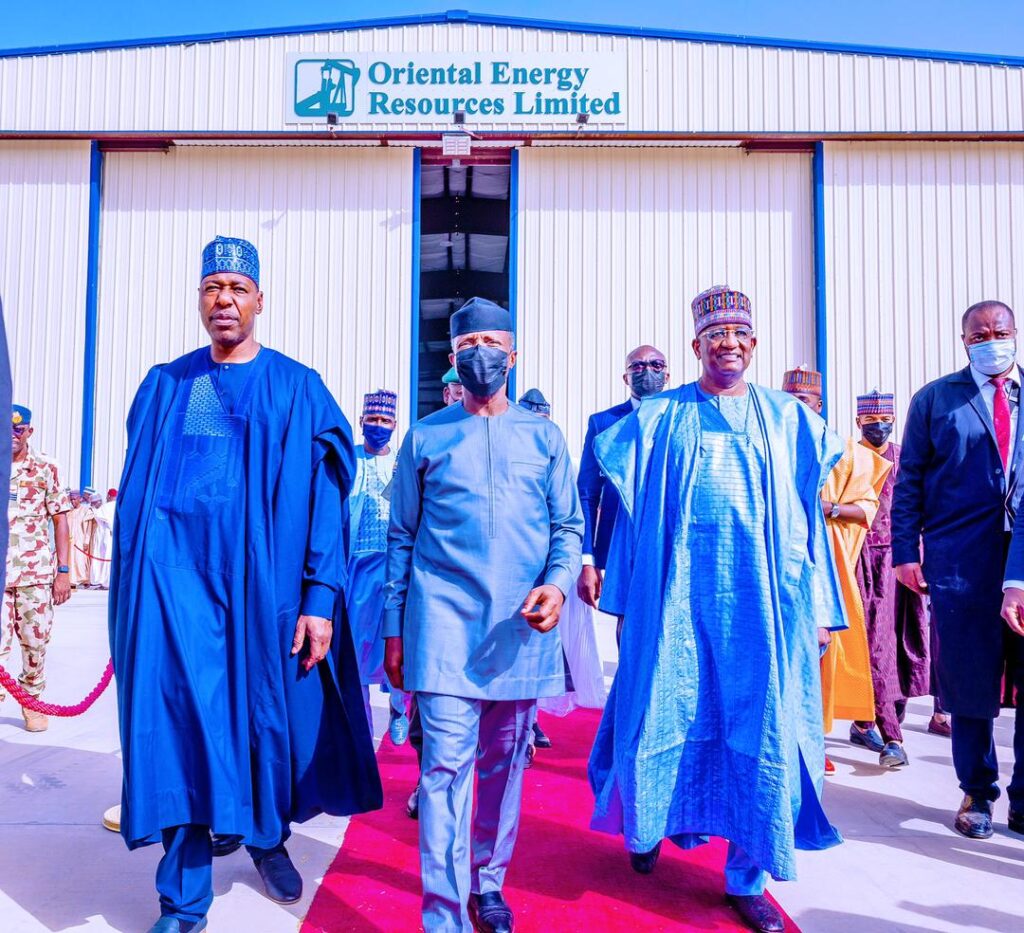 *Says “his positive traits, habits can be multiplied for the benefit of our nation.”

A 12MW Solar Hybrid Power Plant for the University of Maiduguri and its teaching hospital is nearing completion, just as the Buhari Administration will continue to invest in the nation’s tertiary institutions to achieve greater results, according to Vice President Yemi Osinbajo, SAN.

Prof. Osinbajo stated this in his remarks on Thursday at the formal handover of the Muhammadu Indimi International Learning Centre to the management of the University of Maiduguri.

The Centre which was built and donated to the university by a foremost businessman and philanthropist, Muhammadu Indimi, was commissioned by President Muhammdu Buhari in December 2021.

According to the VP, “the Buhari Administration is continuing to invest in our Universities. UNIMAID is in phase 2 of the Energizing Education Program funded through the Rural Electrification Agency.

The Federal Government’s Energizing Education Programme is geared towards delivering on several critical policies and objectives of the administration including improving power supply around the country by providing solar hybrid plants in 37 Federal Universities and 7 teaching hospitals.

“The Federal Government through REA (in partnership with the World Bank) is in advanced stages of establishing a 12MW Solar Hybrid Power Plant to power UNIMAID and its Teaching Hospital.

Citing the rise to fame of Nigerian tech companies to justify the need to invest more in the education of Nigerians, the VP recalled the Nigerian owned tech firms that have become Unicorns, saying “these companies achieved the coveted Unicorn status despite the perceived disadvantages of our region globally. Imagine what we could do if we have a more committed focus on Science, Technology, Engineering and Math (STEM) programs.

“Nigeria could conceivably dominate the technology space as we dominate in Nollywood and the music scene. The knowledge economy of the 21st century emphasizes the need for all of our children to have education so we can have many more unicorns.”

Speaking further, the Vice President said, “barely two weeks ago Governor Zulum, former Governor Shettima and I were celebrating the 5th year of the establishment of the Learning Centre here in Maiduguri. We saw children who barely five years ago were in IDP camps, many without parents. As of that day, they were teaching us how to write codes, how to program robots, and develop websites and other products of their education in technology. Such is the power of education.”

Prof. Osinbajo also disclosed plans by the Federal Government to augment grid supply and protect against energy sabotage in Maiduguri with the deployment of 30MW of solar power to critical areas of Maiduguri, Borno State.

The Vice President said “through the Economic Sustainability Plan approved by Mr. President, NNPC, Rural Electrification Agency (REA) and Yola DISCO are partnering with my Office and the Office of the Governor of Borno to deploy 30MW of Solar Power to critical areas of Maiduguri.

“This will be 6 Solar Plants of 5MW each to augment grid supply and protect against energy sabotage. Let me also say that the efforts of the Federal Government and private persons can only be truly useful where the State government is serious about the development.”

Commending Governor Babagana Zulum of Borno State for the leadership that has transformed infrastructure in the State, the VP said “by his great achievements here, he has shown exactly that seriousness. He has built several mega schools, massive commercial centres, over 8000 housing units, the first flyover in Borno State, but what is most heartwarming is that all of these are at very low cost.”

Regarding the host, Alhaji Muhammadu Indimi, Prof. Osinbajo said “his concern for others and his passion to support others is evident not only all-around Maiduguri but also across Nigeria, around Africa and internationally as well.

“We are proud of his achievements and will continue to look to him to mentor, guide and teach others in business and philanthropy so his positive traits and habits can be multiplied for the benefit of the citizens of our nation and beyond.”

Continuing, the VP said “his actions show that the investment he most cherishes is investing in people. This donation from Alhaji Indimi is part of a broader portfolio of investments in people that he has spearheaded.

“The project in Bama some years back providing housing to IDPs was especially timely given the upsurge in the needs of IDPs as the situation in Borno has evolved through the efforts of this administration.”

The VP noted that “education is the spark behind every girl and boy child to maximize their individual potentials. Alhaji Indimi’s work through his foundation continues to focus on education as a core area.”

According to him, “Alhaji Indimi’s choice of education as a core area for his philanthropic efforts is an inspired one. Knowledge is the key to lifting millions out of poverty, it is the lifeblood of economic empowerment and development, it is the guarantee of a better life for our people.”

Besides Governor Zulum and Alhaji Indimi, dignitaries at the event included Deputy Governor of Borno, Umar Usman Kadafur; Senators Ali Ndume and Abubakar Kyari; the Shehu of Borno, Abubakar Ibn Umar Garbai; members of the Borno State House of Assembly and Executive Council, the Vice-Chancellor of the University of Maiduguri, Prof. Aliyu Shugaba, among others.