A conversation with Nigeria: “Do we need another traditional politician?” By Dele Obilade 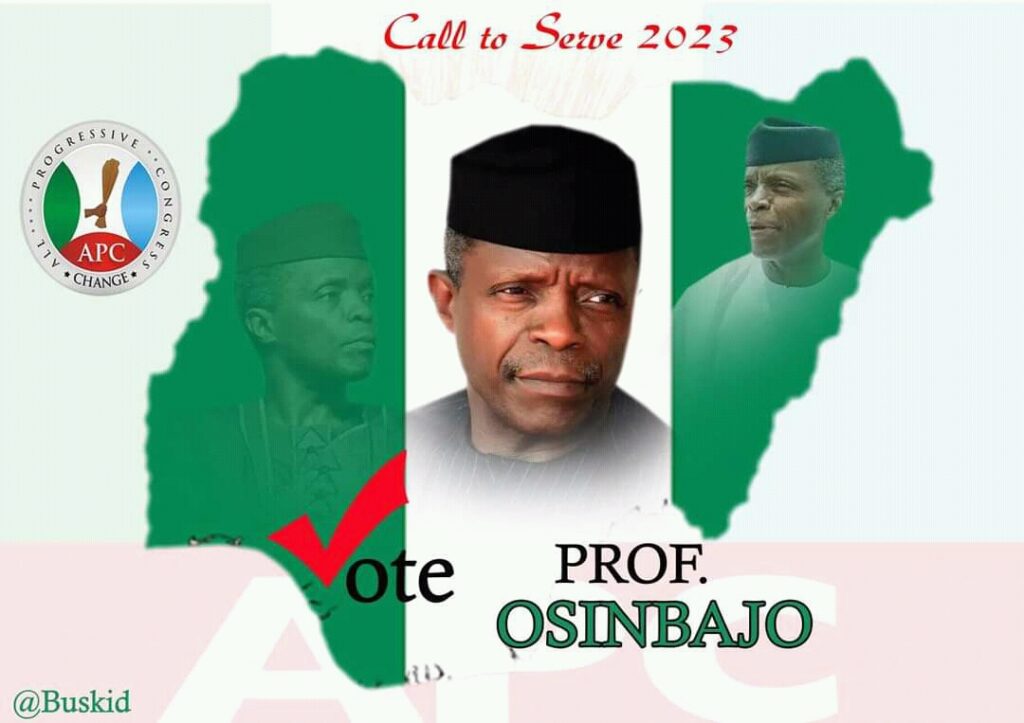 11th April 2022 will be etched in history as the day Vice President Yemi Osinbajo, PYO to those who know him well and to those who profess to know him well (the writer is neither, so is sticking to his official title), finally ended the uncertainties, rumours, innuendos and indefiniteness by formally declaring his candidacy for the President of the Federal Republic of Nigeria. Will history be kind to his candidacy? Time, as they say, will be the judge!

When Shirley Chisholm, first black woman to make a bid for the Presidency of the United States, announced her candidacy, she said “I want to be remembered as a catalyst for change in America”. With “change” having been the rallying cry of President Buhari’s regime under which the Vice President would have served for 8 years when the second term ends, will the Vice President still be the man of “change” to lead Nigeria to that better and glorious future all well-meaning Nigerians pray and hope for?

Winston Churchill, arguably Britain’s greatest war leader, once said “To improve is to change”. Most Nigerians, even those not disposed to Osinbajo, will likely agree he will, if elected, be an improvement on civic engagement in Nigeria even if only in relation to his verbal communication skills. It is though not the role nor the intention of this writer to extol or wax lyrical on the many virtues and accomplishments of the Vice President. More erudite and persuasive writers have done this already, with more no doubt to come in the nearest future. It is also not the role nor the aim of this writer to disparage or cast aspersions on the presidency of President Muhammad Buhari. President Buhari was the leader Nigeria needed after 16 years of PDP misrule. Whether or not, he achieved all Nigerians hoped for is a matter of contentious debate. His supporters will argue he did all he could within the constraints of what was available, pointing to increased and massive spending on infrastructure from railways to roads, while naysayers will point to deterioration in standard of living and, rampant or sporadic acts of banditry and terrorism that appear to go unpunished. History will render its judgment in due course.

What stands out and will no doubt draw a lot of Nigerians to the Vice President is that his integrity is unquestioned and unimpeachable. This is a man who can hold his head high and declare to the world, I have no skeletons nor hidden agenda. No fear of sordid tales of hidden wealth, corrupt riches, illegal funds or unexplained sources of income to titillate the olfactory senses. Of how many Nigerians in a position of governance can this be truly said?. I posit that I will not run out of fingers for counting before concluding the list.

With the Vice President’s integrity intact, what else do Nigerians require and desire in a man to lead Nigeria at this important and auspicious junction in its history; a country in turmoil and darkness (and not just from the collapse of electricity infrastructure), with citizens scrapping and scraping to feed their families in unsecured environments even as the elite and the chattering classes build their grandiose houses with 24hrs power supply in secure environments to keep the barbarians (i.e. the masses) out.

What unites the rich, poor, strong, weak, Christians and Muslims and anyone else who lies in between or has fallen through the gaps is “whither thou goest” Nigeria?

In this 21st century, should Nigeria take a left turn and follow the same geriatric politicians (with varying and dizzying ages often defying mathematical addition and subtraction skills) that have held the country in their vice like grip for decades, knowing it will be more of the same – underdeveloped and full of untapped potential? Alternatively, should Nigeria turn right and choose a non-politician, a man who most Nigerians barely knew 8 years ago, but whom with the evidence we have seen, appear to be what Nigeria desperately requires and, is willing to decry and deny the negative forces that once again seek to hold Nigeria back? Put simply, if less adroitly, do we follow one of the brightest and most intellectual of Nigerians who is relatable, understands what is needed and whose ambition is to serve his people or do we follow the same self-serving old and infirm politicians we would not trust with our wallet but want us to trust them with the country’s purse strings?

“Effective leadership is not about making speeches or being liked; leadership is defined by results not attributes.” Undeniably, the Vice President makes great speeches, befitting of one of Nigeria’s brightest and best legal minds and a Senior Advocate of Nigeria. His record, when he managed the Social Investment program from N-Power to TraderMoni have left an indelible mark on the country. He is also well liked across the country as evident by record crowds that greet him wherever he goes, seeking to touch him and be seen with him as if to bestow some of his greatness on them. Does the Vice President though have the results to show he will be an effective leader for Nigeria?

I must express my gratitude to the group “Identify the Right Leader” for dealing extensively with the achievements of the Vice President in their report titled “Osinbajo – An Impact Assessment Report”. I would commend all Nigerians to read the report with its impactful insights on his achievements (N-Power, TraderMoni, Homegrown School Feeding Programme to name just a few). The report says better what the writer could only have hoped to say here. Are these achievements sufficient to commend that the Vice President will be an effective leader for Nigeria?

The answer to the question and to all doubtful questions as to his leadership qualities is unquestionably “YES HE WILL BE”.

According to Chief Obafemi Awolowo, “Those of us placed in a position of leadership must be prepared to grasp the nettle if we unite in doing so, and if, in addition, we set a worthy example and a marat on pace in probity, unselfishness, and self-sacrifice, the people will follow, all too readily, in our footsteps.”

Even his opponents, of which no doubt, there are many will accept the Vice President has certainly grasped the nettle of leadership, not only through his position as Vice President for nearly seven years, but also in seeking to replace Buhari. He has not sought to assume to the office of President by claiming to be entitled to be coronated, having served as Vice President nor has he declared it to be his God given right or ambition. Instead, as all great leaders are wont to, he has instead put himself forward as demanded by his people. The petition of the Concerned Citizens of Nigeria, being one of such demands. A leader, they say, must respond to the clarion call of his people to lead them, not because he wants to but because he has no choice but to obey the call of his people. As to probity, even his detractors do not deny the Vice President is a man of unimpeachable integrity. “Any nation that does not emphasise integrity will always fail.” – Vice President Yemi Osinbajo.

Is the Vice President unselfish though and willing to sacrifice his good for the betterment of others? Before addressing these questions, we are reminded of the words of Tafa Balewa, first Prime Minister of Nigeria. “I am convinced, and I want you also to be convinced, that the future of this vast country must depend, in the main, on the efforts of ourselves to help ourselves. This we cannot do if we do not work together in unity.”

To understand a man is to know what he holds dear. The Vice President is known as a man of strong faith, disciplined and willing to live according to the tenets of his faith. When he chooses to admonish and stand against some of his faith, we must listen and behold.

These are the words of a man who sees power as seeking to do good for all and not just for his friends or members of his tribe. If a man is willing to call out his friends, even if not convenient or politically the right thing to do, surely this is a man to be trusted with the country’s purse strings, a man who will “set a worthy example and a marat on pace in probity, unselfishness, and self-sacrifice” for the people to follow.

As we reflect on the various candidacies that have been announced and those to come, we must ask ourselves – who do we consider to be the best candidate to take Nigeria forward, not because he is a member of our tribe or our friend or of our faith? With PYO (at this stage the writer now professes to know him well) as President in 2023, will Nigeria be better in 2027 than it is now? Even if the Lord or Allah has since called you to sit by his side, will PYO as President bequeath a better Nigeria to your children and loved ones than it is now? Will PYO be a break from the past history of failures?

If your answers to at least 2 of these 3 questions is a resounding “YES”, get out and campaign, vote, educate, contribute and do everything within your power to ensure he is chosen as the candidate for APC and, subsequently, voted in as President. Your country will be grateful to you. Your family will laud you. Generations of Nigerians to come will applaud you. Africa will thank you.

On my part, after much consideration, deliberation and prayers, I commend to you PYO, a man able to join the pantheon of great leaders, to stand on the shoulders of Awolowo, Azikiwe and Balewa and other great leaders of Nigeria to lead Nigeria, his people, to the promised land of development, infrastructure, security and prosperity for all. He is the leader Nigerian needs in 2023. He is indeed the “chosen” one. HE IS THE ONE!!

In the words of the Vice President himself, “Great economies and great nations, prosperity, and abundance of nations and communities are created by men and not spirits.”