2023: WHY ACADEMICS, PROFESSIONALS MUST PARTICIPATE ACTIVELY IN ELECTIONEERING, BY OSINBAJO 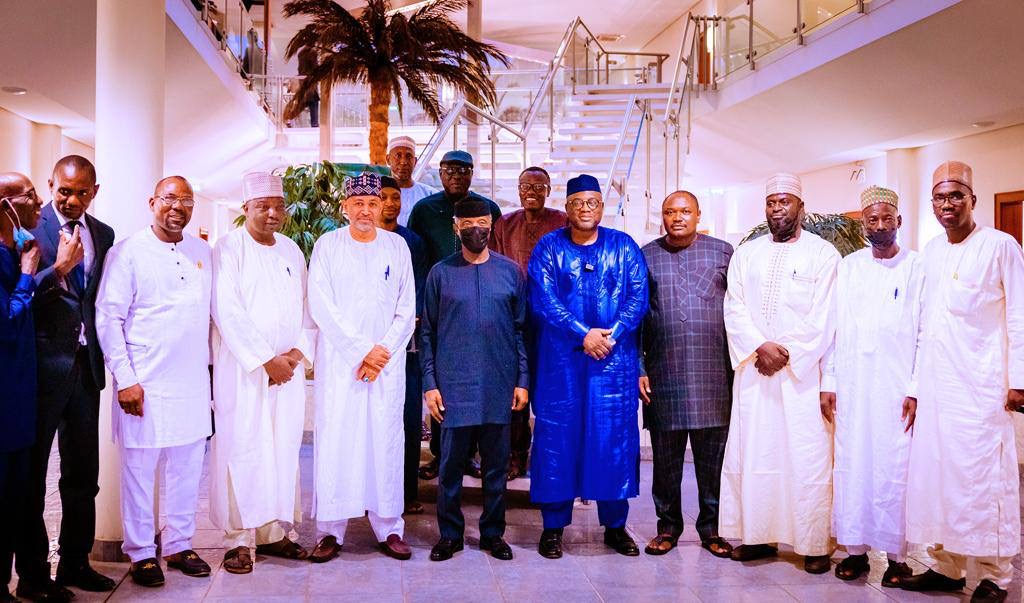 Ahead of the 2023 Presidential Elections, Vice President Yemi Osinbajo, SAN, has called on academics and members of other professional bodies to participate actively in the task of making Nigeria a better place for all.

Prof. Osinbajo stated this yesterday when he received, on a courtesy visit to the Presidential Villa, a team of 13 professors who came to endorse and support his presidential aspiration (with representation from the six geo-political zones) under the aegis of the Progressive Intellectuals Advisory Group.

According to the Vice President, “these days, you find all sorts of pretenders claiming expertise in everything under the sun without any real expertise. So, it is important that academics do not vacate that space to allow all sorts of people to begin to postulate on practically every issue.”

Recalling his experience as an academic who became an Attorney-General, the VP said “one of the most important things I recall when I served first as Attorney General of Lagos State was that it is so important for those of us who are in academics to participate because not only are we among the more knowledgeable groups, we have also done more work.”

Continuing, the VP, while welcoming the interest of the professors in the upcoming 2023 Presidential Elections, noted that “the path that you (the group) have chosen is a very crucial one because in the future, more intellectual groups will take the responsibility that is really theirs. And I think that for those of us who are from the academic community, it is a privilege that we have – being the intellectual crème de la crème of our society, and this comes with responsibility.”

He appreciated the group’s endorsement of his presidential aspiration and observed that “if there is any sort of endorsement that has given me particular joy, it is this one; because if one is endorsed by professional colleagues, people who live their lives by critical analysis and evaluation; it is worth celebrating.

“These matters are not to be taken lightly. For a professor to say that he supports a political cause, it is a weighty matter indeed, because you are aware that a lot of reflections go into it.

“But when you have 13 professors all over the country saying that they are aligned to one cause; I am greatly humbled. It is one of those things that doesn’t happen often.”

While expressing appreciation, the VP expressed hoped that “we will work together to make a significant difference for our country.”

Earlier in his remarks, the leader of the group, Prof. Shehu Adamu, the Dean of the Faculty of Health Sciences, National Open University of Nigeria, NOUN, said the visit was to intimate the VP on activities and efforts of the group to support his aspiration to become Nigeria’s President.

He said the academics were convinced of the VP’s capability to lead a more prosperous Nigeria, hence their resolve not only to endorse him, but also offer their expertise and do what it takes to ensure that the VP emerges victorious.

Prof. Adamu said the group will engage in activities, including media engagements, community mobilization, and partnerships with other professionals, among others, to shape public opinion in a manner that will lead to a successful run by the VP in 2023.

Another member of the delegation, Prof. Nasiru Musa Yauri, the Vice Chancellor of the Al-Kalam University, Katsina said of the group: “We have decided we will not fold our arms; we will do whatever it takes to actualise the PYO 2023 project.”

In a similar vein, Prof. Chukwuemeka Jaja Nwanegbo, the Head of Political Science Department, Nnamdi Azikiwe University in Awka, Anambra State, declared that members of the academic community “don’t want to sit back and watch the political terrain disallow you from emerging. So, we want to work with you, other professionals and students to actualise your bid.”