2023 PRESIDENTIAL RACE: I CAN’T SAY NO TO THE CALL OF DUTY, OSINBAJO DECLARES IN OGUN STATE 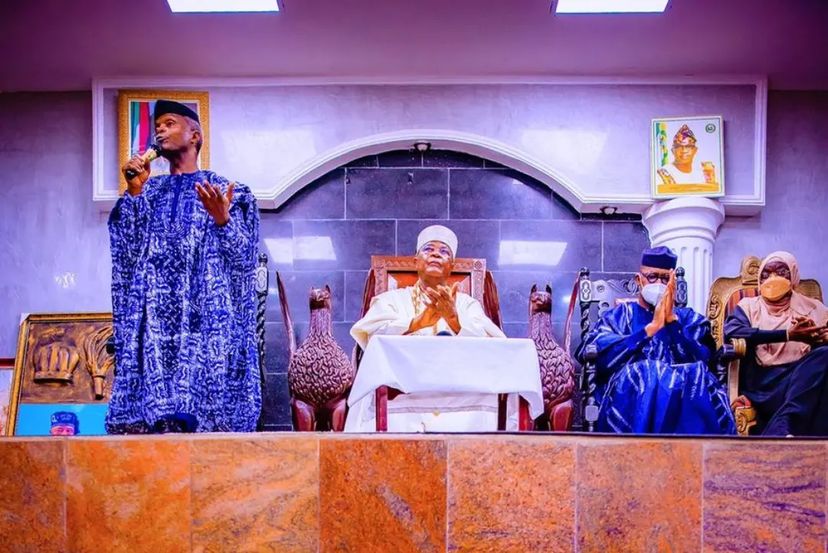 *VP adds: How President exposed me to every aspect of govt, never fettered my discretion as Ag. President

*You have demonstrated capacity, capability, we will stand by you, support you – Governor Abiodun to VP

*VP showered with endorsements by Akarigbo, Alake & Olu of Ilaro

These were the words of Vice President Yemi Osinbajo, SAN, yesterday during his visit to Ogun State, where he met with traditional rulers, official dignitaries, leaders of thought and state delegates of the All Progressives Congress (APC). Besides the interaction with the delegates at the State Capital, the VP’s other stops were in Sagamu, where he was hosted to a townhall reception at the palace of the Akarigbo, the Alake’s palace and, later in the day, at the palace of the Olu of Ilaro, all in Ogun State.

Everywhere he went yesterday, the receptions reflected a homecoming welcome for the Vice President, with mammoth crowds on the streets and at the palaces. The people of the State adorned the streets and roads as the VP’s convoy drove through the cities of Abeokuta, Sagamu and Ilaro.

On several occasions, the VP acknowledged cheers from men, women, children, and youths – including a group of Nigerian students in Abeokuta – with many dancing and singing, while praising him and President Buhari for their good works in government.

The VP’s visit to Ogun State on Tuesday comes a day after his visit to Ondo State, where he also received a massive welcome.

The Vice President started his visit to the State with a stop at the Akarigbo’s place, where Oba Babatunde Adewale Ajayi, Torungbuwa II, welcomed him and Ogun State Governor, Prince Dapo Abiodun, to a festive reception, with crowds inside and outside of the venue, singing and dancing.

He later also paid courtesy calls on the Alake and Paramount ruler of Egbaland, Oba Adedotun Gbadebo; and the Paramount Ruler of Yewaland and Olu of Ilaro, His Royal Majesty, Oba Kehinde Olugbenle, Asade Agunloye IV, where he informed them of his progress in the presidential aspiration bid for 2023.

Praising the President for being open-minded and giving him opportunities in government, Prof. Osinbajo also stated that his decision to run for president was to give the best of his service and wealth of experience to the nation.

“If there was anybody who can hit the ground running, that person is me,” the VP declared.

“After I have spent seven and half years as Vice President of Nigeria and I have acted as president… the only question I should ask myself if I am called to run for office, is, who have I sworn an oath to?

The Vice President noted that governing at the highest levels in the country required some experience and training, which he had expectedly garnered in over seven years serving as President Buhari’s deputy.

He added that he had participated at both local and international levels of governance, as well as tackled sensitive issues of government, restating that “God did not provide those opportunities simply so that I’ll go and sit down and write my memoirs.”

“I believe that now, with all that I have learnt, all that God has given me, I cannot turn down the call to serve the people of this country, to serve our generations and generations to come.

“God provided those opportunities such that one day, I will be called upon to serve in the highest capacity, to serve as President of our nation. The opportunity to do so is an important one… The truth of the matter is that everywhere I have served, I served with utmost loyalty, utmost commitment, and I have put my reputation on the line, sometimes even life.”

While acknowledging the will of God and the people in his bid to clinch the APC ticket and contest the 2023 presidential election, Prof. Osinbajo said, “I believe that I have what is required at this time to serve this nation and to ensure that we’re able to build on what all generations previously have built, and to give this country the best leadership that can be given to it for and in 2023.”

Similarly, Prof. Osinbajo highlighted his service in academia, public and private sector, and international organizations over the years, and his dedication to human rights, justice, fairness, equity, good governance and national development.

“I have had the good fortune of serving as Vice President after some years of doing other things. As many of you know, I was first a lecturer at the University of Lagos, but I was also one of the first lecturers at the Ogun State University. I was the first to teach Criminal Law at Ogun State University, and many of my students are here.

“We came to Ogun State University and we were not paid a penny, and at the time, I was at the University of Lagos and we were invited to come and establish the Faculty of Law. We came here and rendered our services for 4 years… We thank God that today, a lot of the products of that enterprise are everywhere. Some are even judges today and some are Senior Advocates of Nigeria, like me.

Prof. Osinbajo then noted his 5-year stint serving as Special Advisor under Prince Bola Ajibola, who was then the Attorney-General of the Federation and Minister of Justice.

He also highlighted his time as Attorney-General and Commissioner for Justice in Lagos State, where he implemented significant judicial reforms in the state, that became a template for the judiciary nationwide.

“During that period, we established what is now known as the Citizens Mediation Center; we established new court systems. We began a reform of the justice system that was copied across the whole of Nigeria. We ensured during that period that judges began to receive a much different pay structure than ever before. That period in Lagos State was a complete reformation of our legal system and it affected the entire country. Every part of Nigeria was affected by the reforms we carried out in Lagos State.”

He then highlighted his service at the United Nations “as a staff member of the UN for a period of over two years, working in different places, especially war-torn areas.”

At the Akarigbo of Remoland’s palace, the monarch extolled the VP’s qualities, of integrity, competence and character, also noting the impact he had on governance as acting president.

According to the monarch: “we are all living witnesses to when our son was in charge as Acting President.  We saw the difference in our country, and that was just within a matter of weeks and months. What would now happen if he becomes President for 4 years or 8 years? This country will undergo tremendous change.”

Also acknowledging the divine supremacy in choosing kings and leaders, Oba Babatunde Adewale Ajayi prayed that God will grant the party, the strength, wisdom and courage to do what is right for the country.

On his part the Alake of Egbaland, Oba Adedotun Gbadebo, while addressing the Vice President, stated that “the Nigeria of our dreams will come in your time.”

Noting the VP’s excellence in academia, legal practice and government, the monarch said, “By the grace of God, our Vice President has paid his dues, gone through serving others and winning all the way.

“He had the same subjects in higher school like I had, and English that was the most difficult, he won laurels in it in higher school. Through his research work and his legal practice, he has been outstanding. So why shouldn’t we ask you for one more position to the glory of God and to the benefit of all Nigerians, and you’d say no? Certainly not from here.

“I pray that by the grace of God when you come back, you will come and say thank you to all of us. By the grace of God, in your time, it will be most beneficial to all Nigerians. The Nigeria of our dreams will come during your time. We have been waiting for this for so long and God will make it happen.”

Similarly, the Olu of Ilaro, who said he was always delighted to see the Vice President, assured the VP of his support and that of his constituency. “The Almighty God that did that of His Excellency, Governor Dapo Abiodun, in spite of the turbulence, that same God will appear, because he’s still the same yesterday, today and forever, and will do the same in your life.”

Governor Dapo Abiodun also described Prof. Osinbajo as an illustrious son of Remoland, Ogun State and Nigeria, noting that many can attest to the VP’s loyalty, steadfastness, sincerity, humility, character and integrity.

Assuring the VP of his support and that of the people of the state, Governor Abiodun thanked the “Vice President for his support “in the course of our journey to the statehouse.”

“Your Excellency, on behalf of the people, the government of your home state, we are indeed very grateful for all that you did to ensure that there was fairness, equity, and a level playing field in that contest that saw us to the government house. God gave us the glory, God gave us the victory despite all odds,” the Governor recalled.

He further stated that the VP’s treasure trove of experiences in government and the private sector speaks for itself.

Governor Abiodun noted that “if becoming the president is by qualification, you will earn it, you are in office today, as the vice president of Nigeria, you’ve served your boss meritoriously… and you have demonstrated capacity and capability. If the presidency is by the way of an award, we will just gather here today and we will award it to you.

While thanking Governor Dapo Abiodun for his brotherly support, the VP urged him to continue the good projects being done by his government.

The VP also commended the delegates for their time and patience, adding that “I pray that this enterprise, this journey that we have embarked upon, will be fruitful and we will be successful and we will be victorious.”

Earlier on Tuesday morning, just before his trip to Ogun State, the Vice President delivered the keynote remarks at the Nigerian Export Promotion Council’s two-day conference themed: Export for Survival, which held at Transcorp Hotel, Abuja. He returned to Abuja last night.