2023 PRESIDENTIAL BID: HOW VP’S CONSULTATIONS WITH APC DELEGATES ARE PROGRESSING 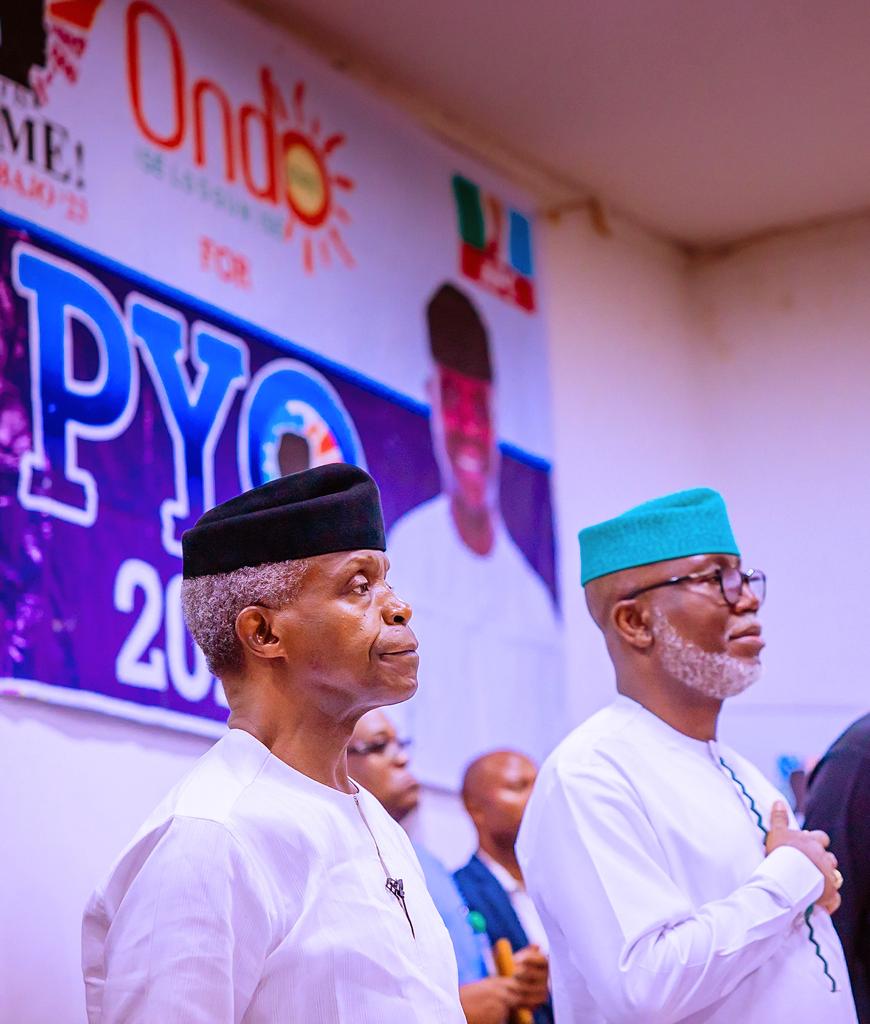 *He is eminently qualified for the job, says Ewi of Ado-Ekiti

With 15 States and the FCT now covered by Vice President Yemi Osinbajo, SAN, in continuation of his consultations with stakeholders and delegates of the All Progressives Congress (APC), the groundswell of support for the VP’s aspiration to become president in 2023 continues to gain steam.

Prof. Osinbajo was yesterday in Ondo and Ekiti States, where he was warmly welcomed and received support for his bid from traditional rulers and people in the States.

This was evident in the state capitals, where he was welcomed by a large crowd of people on the streets, at the palace of the Ewi of Ado-Ekiti, Oba Rufus Adeyemo Adejugbe, and the venues of the meetings with delegates.

In Ado Ekiti, capital of Ekiti State, the VP met the Ekiti Traditional Council and then, the Ewi of Ado Ekiti, alongside his chiefs.

On arrival in Ondo and Ekiti, the Vice President was received by the States’ Deputy Governors; Mr. Lucky Aiyedatiwa – Ondo, and then later by the Ekiti State Deputy Governor, Chief Bisi Egbeyemi, at the capital city of Ado– Ekiti.

The VP emphasized that his sole objective for running for president is the desire to serve the country and its people with zeal, knowledge and the experience he has garnered in public service, especially as Vice President in the last 7 years.

In Akure, Ondo State capital, where he spoke briefly to the media on his ongoing consultations with APC delegates, the Vice President stated that he was pleased with the great reception he has been receiving from Nigerians and delegates across the states.

“I am happy for the opportunity to interact with the delegates and to share with them the vision for the future. I’m extremely pleased. And I’m sure the delegates had a very good time interacting with me and trying to interrogate what my views are about what the future should look like,” he said.

In his meetings with the delegates in both states, Prof. Osinbajo restated the commitment of the Buhari administration to address the country’s security challenges and his vision for the country if elected in 2023.

Speaking earlier at the palace of the Ewi of Ado-Ekiti, where he met the Ekiti State Traditional Council, and Ewi- Oba Rufus Adeyemo Adejugbe, the VP thanked the traditional rulers for always being there and ready to give sound advice and counsel, as well as his warm hospitality and time.

Prof. Osinbajo further said that, having served in office as vice president and worked under a transparent President that has given him every opportunity to participate in governance and fully understand the issues, “God has given me this knowledge and exposure so that in due course, and I believe the time has arrived, I will be able to put myself forward and use all that God has given me, through learning and experience, in the service of our country.

“I must add that my sole objective is to serve this country and the people, with everything I have learnt and that I have.”

In his remarks, Oba Rufus Adeyemo Adejugbe noted that Prof. Osinbajo was “eminently qualified for the job” (to become president).

“We (traditional rulers) should have a role in the constitution of this country, not advisory position alone, so that when there are challenges, like we have now, we can have a voice that will be respected. I pray God Almighty will direct your thoughts, protect you, guide you and take you back to Abuja safely.”

As he often does in his interactive meetings with the APC delegates and stakeholders, the Vice President spent time in each State taking questions and exchanging ideas on major national issues and also discussing political issues.

Before he departed for Ondo and Ekiti States yesterday, the VP had represented the President at an Infrastructure Solutions Summit in Abuja. Today he has also received the Secretary-General of the Organisation of African, Caribbean and Pacific States, Mr. Georges Rebelo Pinto Chikoti, and is expected to meet with APC delegates in Akwa Ibom later today.

Laolu Akande
Senior Special Assistant to the President on Media & Publicity
Office of the Vice President
13th May, 2022