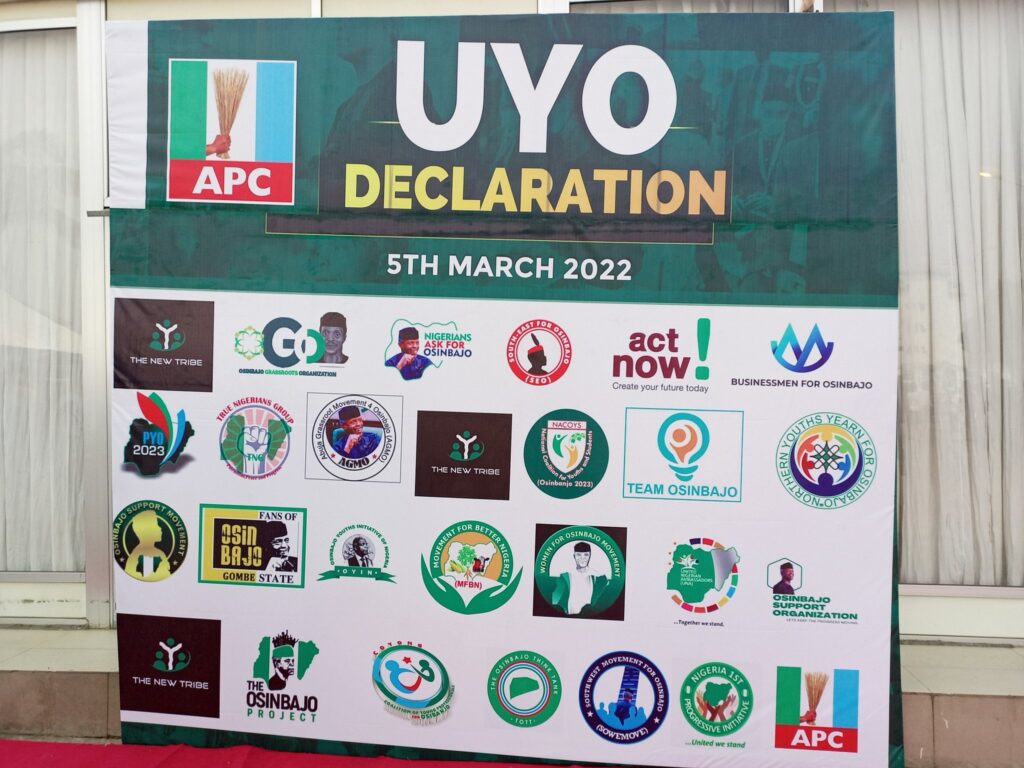 A coalition of All Progresives Congress (APC) stakeholders in alliance with over 180 socio-politcal groups under the aegis of The New Tribe (TNT), have impressed it on Vice President Yemi Osinbajo, that the future of Nigeria lies in his hands to rescue from her current socio-economic travails.

“We will purchase nomination and expression of interest forms for him,” Chief Otu Ita Toyo, who read the communique at the end of the “Uyo Declaration.”

He explained that the conference, which came after the maiden assembly on the same subject in Kano, stressed that the event became neccessary as several appeals from various quarters were yet to be heeded by Pastor Osinbajo.

The groups drawn from the academia, professional bodies, political stakeholders and youths, met at the Emerald event centre and appealed to Osinbajo to heed their calls as his acceptability cut across the aged, youths and the down-trodden.

Toyo, a chieftain of the All Progressives Congress (APC) in Akwa Ibom State, who chairs the Local Organizing Committee (LOC) for the event read the communique to reporters.

He said: “There are 180 support groups groups and all are calling on the Vice President, Prof Yemi Osinbajo to come and contest.”

“While we await his decision we shall intensify our drive across the country to raise partners and supporters for him. We shall equally continue the process of building structures in all the wards to bring to reality our dream of Osinbajo presidency.

“We call on all our members from across the length and breadth of Nigeria to storm Abuja on March 26 to demonstrate to the party their love and support for this patriot and nationalist.

“We call on Mr President to stand solidly behind this tested, loyal and true apostle of him and ensure that a man of conscience like him who truly abhors corruption succeeds him to continue where he stops.”

According to the communique the Uyo declaration which was sequel to the Kano declaration and the acceptance of the  vision of the “New Tribe” further resolved to “align with the Kano Declaration” to mobilise funds to purchase the APC expression of interest and nomination forms for Prof Yemi Osinbajo in furtherance of our total commitment to the noble course of compelling the Vice President of Nigeria, Prof. Yemi Osinbajo to contest for the office of the President of the Federal Republic of Nigeria.”

It also resolved to carry out a thorough appraisal of current  political trends in APC and INEC timetable and engage more prominent Nigerians, the Academia, Civil Society groups and national delegates of the party, Professional bodies, Religious Leaders, Youths and Women Organisations on the need to elect this competent and reliable Nigerian with proven track record, integrity, transparency and honesty in the person of Prof Yemi Osinbajo as the President of the Federal Republic of Nigeria in order to realise the vision of Nigerians.