2023: LIES MAY BLOOM BUT BEAR NO FRUIT, BY GAMBO MANZO 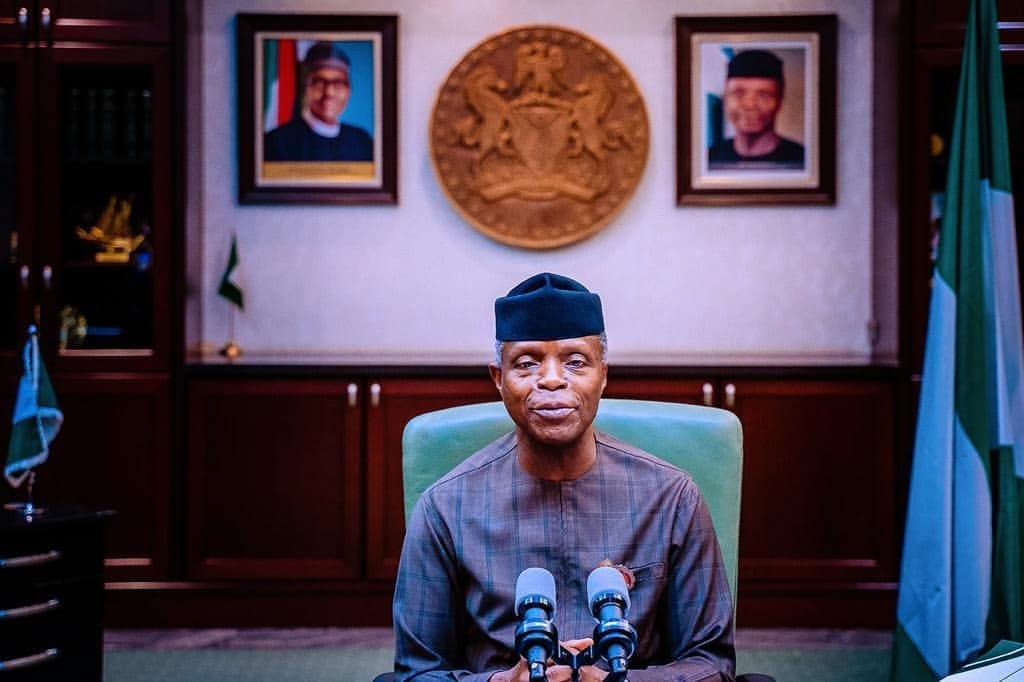 2023 promises to be a very interesting year for Nigeria and Nigerians. In the game, if you are seen as very competent or favoured, you may have to deal with more smear campaigns and calumny.

Not too long ago, my boss, the vice president, Professor Yemi Osinbajo (SAN) was the target of one of such vicious and unwarranted attacks by one Farooq Kperogi. While Kperogi’s diatribe and persona does not deserve the dignity of response normally, it is however important to debunk his falsehoods for the sake of posterity. Let the records be clear.

It is an open secret that Kperogi’s antecedence – a history of hate, falsehood, divisiveness and being repeatedly discredited, is of no moment and serves no purpose. But at some point in the future, a generation may not have the full context and true picture. They may not understand how poorly society and people of today think of Kperogi. This is why I have chosen personally to set the record straight.
Before I attempt to expose Kpeogi’s deep-rooted hatred for VP Osinbajo (for reasons only known to him), I will provide a brief backgrounder that will ultimately clarify pertinent issues he has tried (in futility) to raise against Osinbajo.

But let me introduce myself first. I am a Fulani man from Gombe state. Before I was appointed to work in the Office of the Vice President, I was a two-term councillor representing the good people of Ward ‘B’ (Apapa GRA) under the Apapa local government council of Lagos state. I have lived and worked in Lagos for many years and have throughout this period been accorded rights enjoyed by all Lagosians regardless of my socio-ethnic or religious affiliations. As a politician and a foundation member of the All Progressives Congress, I never suffered any discrimination in Lagos nor was I denied access because of my background.

A few years after I met Prof. Osinbajo, he was nominated as running mate to President Muhammadu Buhari, who was then the APC presidential flagbearer. Fast forward to how I started working with him at the presidency — one evening, on his return to Lagos from Abuja where he had gone to formalise processes for the commencement of the campaigns as President Buhari’s running mate, Prof called me and instructed, “Gambo, you will have to relocate to Abuja. If we are to win this election, I need you there, taking our message to the people and coordinating things”.

And so I obeyed and today, I work with him knowing no difference between colleagues professing other faiths, all of us working together as a close-knitted team.

It is against this backdrop that I have decided, with all sense of duty and humility, first as an appointee in the VP’s office, a Fulani and a Muslim, and most importantly, an eminently qualified Nigerian, to call out Kperogi and expose his bag of lies.

Aware of the fact that Nigerians are very sentimental about issues of religion and ethnicity, Kperogi cleverly deployed the instrumentality of religion to malign Osinbajo, anchoring his infamous article on religious bigotry without clearly substantiating his baseless claims that Osinbajo has a deep hatred for Muslims. He made futile efforts to link the VP to issues of bigotry but failed to show clearly where Osinbajo has shown preference over Muslims in appointments, public utterances or even close associations and relationships.

In a recent article, Kperogi deliberately and without any facts portrayed the vice president as bigoted alleging he was one of the many who advocated for a Christian governor in Lagos state. But Kperogi in his characteristic manner kept away the fact of the matter – which is the agitation was widespread at the time and even Muslims joined in the call.

Also, he did craftily avoided the fact that Osinbajo indeed, in a lecture delivered at the time and titled, ‘Christianity, Politics, Now and Beyond,’ expressed support for merit and urged proponents of the idea to instead focus on candidates with values rather than just picking someone because of religion.

A couple of years after, Osinbajo’s stance hasn’t changed. Instead, his stance on the subject matter remains firm, his belief unshaken even in the face of adversity – for the VP, appointment or selection to positions of leadership and influence in society must be on the basis of competence and merit rather than parochial considerations, especially religion and ethnicity. The VP’s opinion is premised on the fact that every section of the country is blessed with abundant human resources to occupy any kind of position of authority. So, Kperogi’s allegations in this light are ridiculous.

To further buttress his point about the VP and his alleged Christianisation agenda, Kperogi referenced a statement credited to the president of the Christian Association of Nigeria, Reverend Samson Ayokunle, about the 2023 elections and found a way of linking it to Osinbajo.

In the first instance, the CAN president never outrightly advocated for Christians to vote for only a president of Christian stock. What Ayokunle said was simply that CAN would also mobilise its members to kick against Christian/Christian or Muslim/Muslim tickets in 2023 in view of the religious plurality of Nigeria.

His words: “Christian politicians should brace up and make themselves available for leadership, it is time. Let me say it clearly that any party that presents a Christian/Christian or Muslim/Muslim ticket is insensitive to our religious plurality should deservedly fail in 2023. We will mobilize the Christian body to fight against that proposition”.

Kperogi, in his characteristic but despicable manner, left out facts noted by the CAN president, in his article. If not for his propensity for evil, why would he leave out this part? What are his intentions? Who are Kperogi’s paymasters or puppeteers? Who is paying to have his very dubiously authored piece in major newspapers and online platforms? Why are they scared of Professor Osinbajo, even when the man has not declared any interest?

In another attempt to rewrite the history of the operations of the Office of the Vice President, Kperogi alleged that Osinbajo appointed only his Christian brethren to work as aides in his office, all according to him, depict Osinbajo’s disdain for Muslims.

For the avoidance of doubt, the good man (the VP) Kperogi falsely claimed has disdain for Islam appointed me his aide even before the campaign kicked off. During the electioneering season, the vice president was fully integrated into then-candidate Buhari’s inner circle because they saw in him the humility, comportment and drive that qualified him to be there. And I watched as he treated his boss, the president-to-be, with the utmost respect and reverence just as he did everyone else whether Muslim or Christians.

Once he was elected into office, Osinbajo appointed a Muslim, Abdulrahman Ade Ipaye, as his chief of staff (the deputy chief of staff to the president, based in the Office of the Vice President). Kperogi won’t be oblivious of this fact, but pretended to be and failed to mention that many of Osinbajo’s closest and most of his senior aides are Muslims.

Cursory look at appointments in the VP’s office shows that many of his closest aides are deeply rooted in Islam. For instance, the special adviser to the president on social investments, Hajiya Maryam Uwais, who handled the single biggest social investment programme in the history of Nigeria, is a Muslim. She was assisted in that role by another Muslim faithful, Barrister Ismaeel Ahmad, the senior special assistant to the president on social investment. Another senior aide in his office is his senior special assistant on legal and compliance matters, Dr Balkisu Saidu.

Kperogi even stretched his lies further by trying to fraudulently alter the past, like the plot of a bad sci-fi movie. He claimed that Simmons Cooper Partners – the law firm where Osinbajo practised after he served as the attorney-general of Lagos state and when he ran for the office of vice president, had an unwritten law against hiring Muslims. Incredible!

This is just flat out false. Osinbajo would not be a party to such blatant discrimination and no such policy was ever in place, formally or informally. While in the firm, he was one of three senior partners at the firm at the time. By the reason of my proximity, I know at least three Muslim lawyers in senior positions at the prestigious law firm.

Given the diversity of their clientele and the huge cases the law firm has been involved in, such an allegation can only be the figment of Kperogi’s fertile but warped imaginations.

Kperogi’s penchant for mudslinging has made him blind to these facts about Osinbajo hence his resort to arm-twisting tactics to make Nigerians see Osinbajo in a negative light. His campaigns over the years either against the VP or any other victim have been based on falsehoods and innuendos. His expertise is in mixing up half-truths to buttress his point and it is only a matter of time before Nigerians, including his followers, begin to call him out. Kperogi may be rich in many ways, but in truth and character, he is very impoverished.

As a man of faith, Osinbajo would never wish anyone evil. He is a true man of virtues and a noble person. He genuinely respects the wisdom of the old and embraces the innovativeness of the youth, both groups loving him back.

Never in our democracy have the president and the vice president been this close and enjoyed great synergy for this long. It is only utterly depraved minds like that of Kperogi that would falsely claim that Osinbajo would ever wish his boss any harm. The church event, which Kperogi referred to has been roundly debunked. The accuser neither provided the date nor the exact location.

But, truth is not what Kperogi is after. But he’s simply throwing mud and praying hard that some will stick. He has failed.

As an old Hausa proverb goes, “Lies bloom, but bear no fruit”. Kperogi’s lies may have caught fire on online platforms in the last few weeks, but I must remind him that his aim will surely be defeated. If it pleases Allah (SWT), Osinbajo will surely fulfil destiny. No amount of lies will stand in his way. Not a billion Kperogis can stop what has already been ordained.

Manzo is the special assistant on political affairs to the president, Office of the Vice President