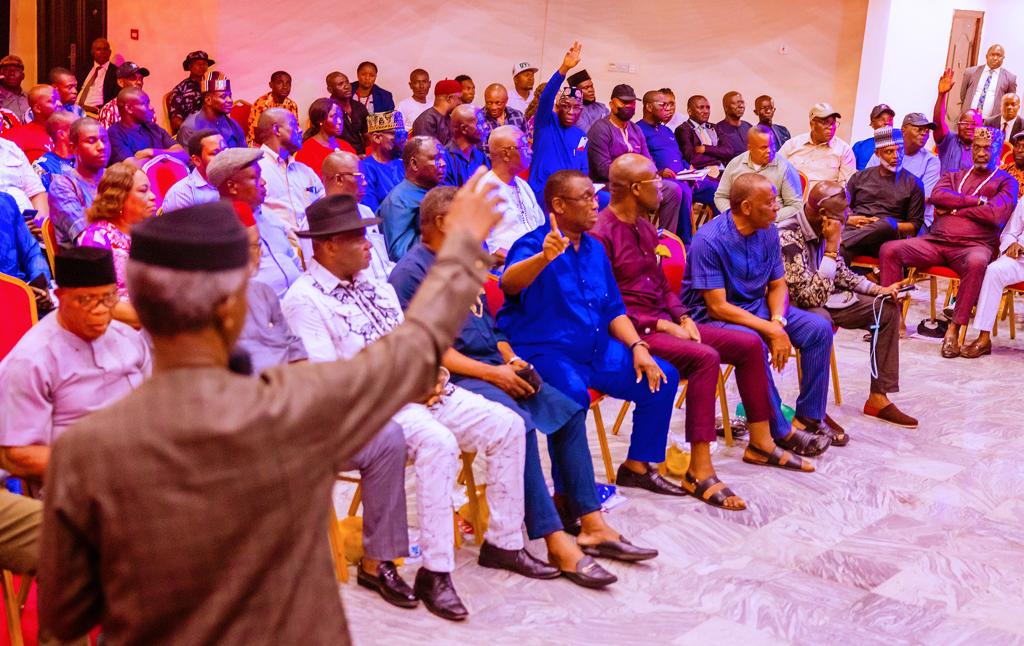 *I will give my best in service to Nigeria, VP restates

*Akwa Ibom monarchs to VP: “ If you succeed, Nigeria succeeds.”

In choosing leaders into elective positions, Nigerians must put sentiments aside and elect the best, especially in 2023, according to Vice President Yemi Osinbajo, SAN.

Prof. Osinbajo stated this in his interactions with stakeholders and delegates of the All Progressives Congress (APC), on Friday in Akwa Ibom State, the 16th State the VP has since visited in his nationwide consultations with party delegates.

Restating that his aspiration to become president is hinged on giving his best in service to the country, the VP said, “this coming election (2023), beginning with primaries, maybe the most significant for our generation, and generations to come.”

“I am sure that God helping me, if I am given the opportunity to do the job, I will give my best. By God’s grace, I believe that this country will be better. Each and every one of us will know that difference.”

Prof. Osinbajo added that he chose to offer himself in service to the country as president come 2023 because of his firm belief in, and dedication to Nigeria’s great future and destiny.

The Vice President’s presidential aspiration has continued to garner commendations both from party delegates and stakeholders, including traditional rulers, state governors and prominent individuals and politicians.

Prior to his meeting with the APC delegates, the Vice President had on arrival in Akwa Ibom State, received a warm welcome at the airport from the State Governor, Emmanuel Udom. He was also accompanied by a former Deputy Governor of Akwa Ibom State and former MD, Niger Delta Development Commission (NDDC), Obong Nsima Ekere; Senator Ita Enang, among other senior state government officials and notable political leaders.

As is now common with the VP’s trips, he also received a robust welcome from large crowds, with dancing and singing by the traditional troupe, while waves of excited support groups and residents, some hoisting huge banners and flyers showing support for the VP’s aspiration to become president, lined the roadsides and curbs.

The VP acknowledge the cheers as his convoy drove into the state capital, Uyo, where he first paid a courtesy call on members of the State’s Traditional Council of Chiefs, who were led by the Council’s President General, who is also the Paramount Ruler, Nsit Ubium LGA, His Eminence Nteyin (Dr.) Solomon Etuk (JP).

The Vice President who formally informed the Council of his intention to run for president in 2023, thanked the Council for the warm reception and hospitality.

In his remarks, His Eminence Nteyin (Dr.) Solomon Etuk, described Prof. Osinbajo as a cherished one, who is cherished where ever he goes, adding that the VP is “a symbol of love, peace and unity of this country.”

“The Vice President is a cherished personality; he is cherished at home, cherished abroad, and cherished everywhere he goes. He is a good friend of the State. He’s also here with us.

“What I want to say, on behalf of the Akwa Ibom State Traditional Council, is that the Almighty God that knows the beginning also knows the end. He knew you before you were born. He will protect you, guide you right, and show you the way to go. When you become the president, please remember us.”

Offering further support for the VP’s aspiration, the paramount ruler said, “Your excellency sir, you are a symbol of love, peace and unity of this country. You must continue to be… Whatever you want to do, may the Almighty God open the door for you to succeed. Because if you succeed, Nigeria succeeds. If you succeed, Akwa Ibom succeeds. May Almighty God be with you and your entourage.”

Laolu Akande
Senior Special Assistant to the President on Media & Publicity
Office of the Vice President
14th May, 2022